CHICAGO (AP) — The Chicago Bears used a different quarterback to get a familiar frustrating result.

Justin Fields left the game with a rib injury in the third quarter and Andy Dalton gave the Bears the lead with 1:44 remaining Sunday on a 49-yard touchdown pass to Marquise Goodwin. But the defense faltered down the stretch again, as it did in the previous game against Pittsburgh, and Chicago lost its fifth straight, 16-13 to the Baltimore Ravens.

“Well, it’s sickening,” defensive end Robert Quinn said. ’I’ll just put it that way. It’s a punch to the gut. We had the lead. The Ravens had the ball, it was on the defense to close it out and we didn’t do that. Yeah, it’s a gut punch.”

Quinn had a career-high 3 1/2 sacks, and the Bears held the Ravens without a touchdown until the final minute. After Dalton’s fourth-and-11 bomb to Goodwin gave Chicago a 13-9 lead, Ravens backup quarterback Tyler Huntley led a five-play, 72-yard drive, with the winning points coming on Devonta Freeman’s 3-yard run with 22 seconds remaining.

Two weeks ago, Fields led a fourth-quarter comeback for a late lead over Pittsburgh. But the defense gave up the winning field goal in the closing seconds.

The Bears found out 90 minutes before the game they would be facing Huntley instead of former MVP Lamar Jackson.

“I literally found out right before we went out who’s starting,” Quinn said. “Didn’t really change anything. No. 2 (Huntley), he’s a mobile quarterback just like (Jackson). We just stuck to our game plan. Just didn’t finish it.”

They held the Ravens to three field goals by Justin Tucker until a third-and-12 pass for 29 yards to Sammy Watkins beat Bears cornerback Kindle Vildor one play before the winning TD.

“I didn’t really see who it was, I just saw a guy wide open,” linebacker Alec Ogletree said. “Usually, those kind of things happen with miscommunication and just not being detailed at the end. A lot of games in this league are won or lost really by you beating yourself.”

“I think situationally, you’re at a point right there where you’ve got guys in there that have got to be able to communicate, and again, I’ve got to go back and find out what the calls were and what the bust was all about or if it was just a good play by them and talk through that,” he said.

The loss is the eighth straight following a bye for the Bears (3-7).

They wasted a stronger defensive effort made all the more difficult by injuries that have them playing without defensive end Akiem Hicks, safety Eddie Jackson and linebackers Khalil Mack and Danny Trevathan. Mack and Trevathan are out for the rest of the season.

Dalton went 11 of 23 for 201 yards, including a 60-yard TD pass to Darnell Mooney on a wide receiver screen — his second pass attempt of the game.

Chicago trailed 6-0 before Dalton came in. The veteran QB had played only a few downs since his Week 2 knee injury against Cincinnati and being benched in place of Fields.

“I’ve been through a lot,” Dalton said. “There’s a lot that’s gone on from starting the year to the injury to not playing, and you know, that’s one of those things.”

With a quick turnaround before the Bears’ Thanksgiving Day game at Detroit, Dalton could be preparing to start. He said it was almost a blessing not to dwell on another blown lead.

“You can’t let this game affect Thursday,” Dalton said. “So we have to move forward.” 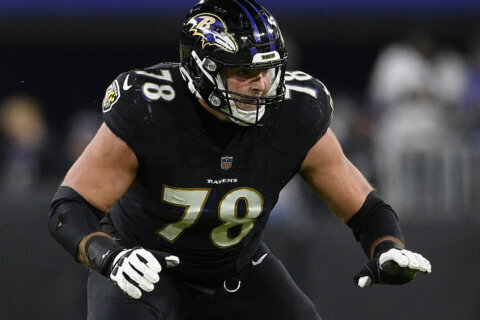 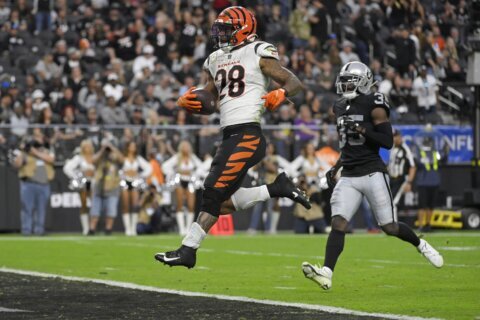