ENGLEWOOD, Colo. (AP) — Teddy Bridgewater’s chances of playing at Pittsburgh this weekend improved dramatically Thursday when he returned to practice four days after suffering a concussion against the Baltimore Ravens.

Bridgewater worked with the starters and was listed as limited on the injury report. He remains in the NFL’s concussion protocol.

Bridgewater left the Broncos’ 23-7 loss to the Ravens at halftime after taking a helmet to his chin from Ravens rookie pass rusher Odafe Oweh. The hit wasn’t flagged. Nor was a whistle blown on the previous play when wide receiver/kick returner Diontae Spencer suffered a chest injury when he was hit by cornerback Tavon Young.

Coach Vic Fangio argued both should have been whistled, Oweh for a high hit on the QB and Young for hitting a defenseless receiver.

Fangio sent the plays to NFL headquarters and intimated the league concurred with him.

“I did” hear back “and I’m not sure I’m supposed to share it with you, but you can figure it out,” Fangio said, smiling.

Backup Drew Lock, who lost his starting job to Bridgewater in training camp, was ineffective in his first appearance as a backup. Denver punted on his first four series and he threw an end zone interception with 3 seconds left on his final drive.

Lock locked in on receiver Courtland Sutton and never saw running back Javonte Williams wide open over the middle. Cornerback Anthony Averett, one of three defenders around Sutton, picked off the pass thrown toward the left corner of the end zone.

That takeaway allowed the Ravens to run the ball one more time instead of taking a knee, and Lamar Jackson’s 5-yard rush put Baltimore over 100 yards on the ground for a record-tying 43rd consecutive game. 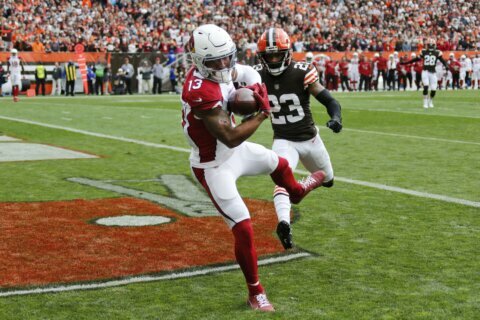 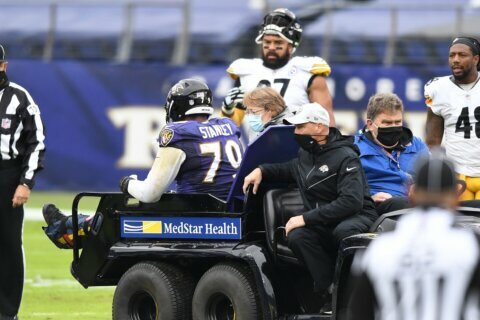