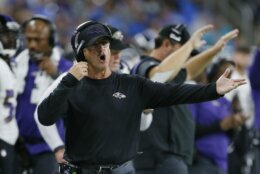 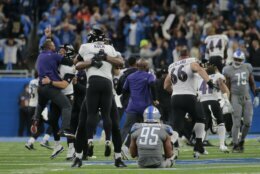 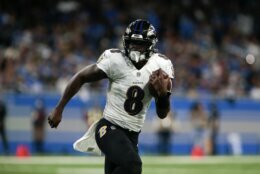 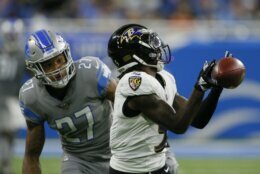 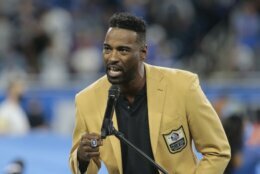 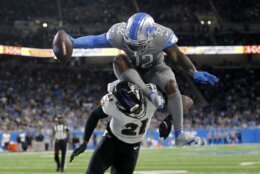 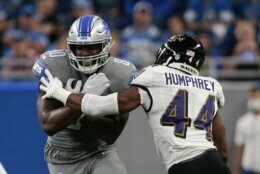 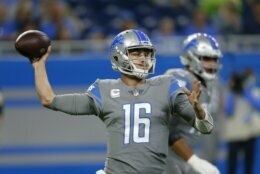 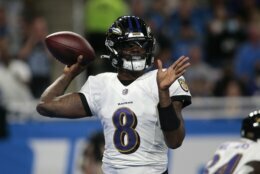 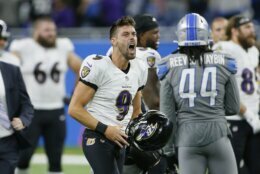 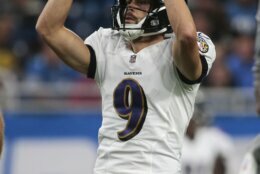 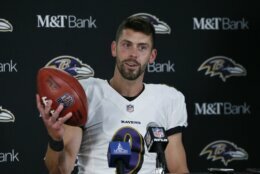 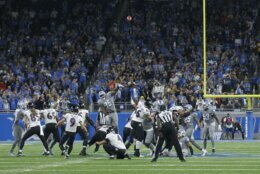 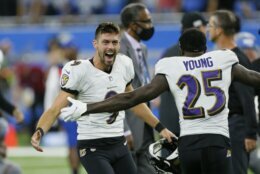 DETROIT (AP) — Justin Tucker’s 66-yard field goal will be the play everyone remembers about the Baltimore Ravens’ win over Detroit.

A lot had to happen before Tucker even got the chance.

There would have been no record-breaking kick if Lamar Jackson hadn’t hit Sammy Watkins for 36 yards on 4th-and-19.

“We had a chance to get off the field on fourth and a long, long way,” Lions coach Dan Campbell said. “That was our chance to put the game away without ever letting them get a chance at a field goal.”

The Lions only rushed three defenders, allowing Jackson plenty of time to let the play develop. Watkins got away from Detroit safety Will Harris to get across midfield and give Tucker a shot.

“I was just trying to buy time,” said Jackson, who had taken two sacks on the drive. “They went three-down, which gave us a lot of time, and they double-teamed our guys. Sammy was running full speed and he came open. I just tried to give him a playable ball and he came through.”

Campbell thought rushing three was the correct decision — he needed his defenders to make a play.

“I think that was the right defensive call — I’m happy with that,” Campbell said. “It was the way we played the call. We had communication errors too many times today, and that’s something we need to clean up.”

Instead, Tucker got the chance to ruin another night for Lions fans. On Dec. 16, 2013, Tucker hit a 61-yard field goal with 38 seconds left to give the Ravens an 18-16 win on Monday Night Football.

“I knew he hit from 61 the last time we played here, so I wanted to get him a few more yards,” Jackson said. “I knew if he got enough air under it, he’d have a chance, but to hit the longest field goal in NFL history? That’s legendary.”

Tucker now has the two longest field goals in the history of Ford Field — a stadium where the Lions have usually had Jason Hanson or Matt Prater kicking since it opened in 2002.

The Lions have a history of losing on long kicks. In addition to the two by Tucker, Detroit was also on the wrong end of Tom Dempsey’s then-record 63-yarder in 1970 for New Orleans. Buffalo’s Dan Carpenter beat the Lions with a 58-yarder in 2014.

With 7:08 left in the second quarter, Ravens punt returner Devin Duvernay fumbled at his own 23, and Detroit’s Dean Marlowe returned it to the 17.

However, the play was wiped out because Lions gunner Jerry Jacobs had run out of bounds while covering the kick. Duvernay returned the second punt to the Ravens 35, then caught a 19-yard touchdown pass to give Baltimore a 10-0 halftime lead.

“We hurt ourselves in the first half — I never felt like the offense got into a rhythm,” Campbell said. “But I thought Goff was better in the second half — he came to life and gave us a chance to win.”

Goff led three scoring drives in the second half, including the one that ended with Ryan Santoso’s go-ahead field goal with 1:04 to play.