Tyler Huntley ran for a 7-yard touchdown with 6:35 remaining, and the Baltimore Ravens extended their preseason winning streak to 18 games with a 17-14 victory over the New Orleans Saints on Saturday night.
Listen now to WTOP News WTOP.com | Alexa | Google Home | WTOP App | 103.5 FM
(1/5) 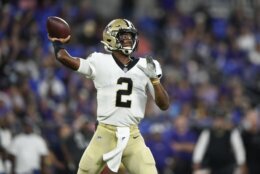 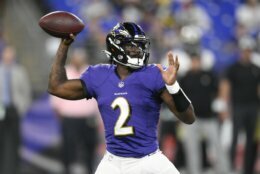 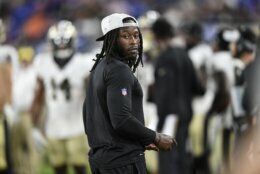 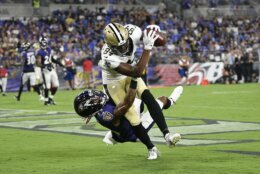 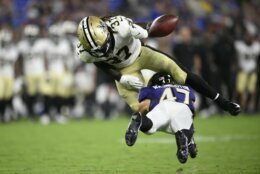 BALTIMORE (AP) — Tyler Huntley ran for a 7-yard touchdown with 6:35 remaining, and the Baltimore Ravens extended their preseason winning streak to 18 games with a 17-14 victory over the New Orleans Saints on Saturday night.

The Ravens haven’t lost in the preseason since 2015. They struggled to move the ball Saturday with quarterback Lamar Jackson held out, but New Orleans couldn’t overcome its six turnovers. Huntley, who took over for Trace McSorley at quarterback in the second half, capped a 12-play, 79-yard drive with the Ravens’ only touchdown of the game.

Jameis Winston threw for 96 yards and a touchdown for New Orleans, but he and Taysom Hill each threw an interception in some immediate growing pains for the Saints in the post-Drew Brees era. New Orleans also lost three fumbles.

“You have six turnovers, 10 penalties, you’re going to struggle,” Saints coach Sean Payton said. “We were fortunate to even be that close, honestly. … Bad job by us as coaches, players. It was ugly to watch.”

Geno Stone had two interceptions for the Ravens. He said it was the first time that had happened since high school.

“But I had three of them that game,” he said. “It felt good getting two.”

Brees’ retirement left the New Orleans quarterback situation in a state of uncertainty. Hill started Saturday and played the first three series. Then Winston played the rest of the first half. Hill went 8 of 12 for 81 yards, and Winston was 7 of 12 for 96 yards.

“I think preseason games, you’re trying to get film out there,” Hill said. “I think there were a lot of really good things that we can all learn from.”

Ian Book came on in the second half, and with the Saints at the Baltimore 35, his deep pass was intercepted by Shaun Wade at the 9 with 1:42 remaining.

Tony Jones scored on an 18-yard run in the second quarter to give the Saints a 7-3 lead. At that point, New Orleans was outgaining Baltimore 157-4 and the Ravens didn’t have a first down. McSorley finally guided Baltimore to a decent drive after that, but the Ravens didn’t reach the end zone until much later.

Jackson had only been practicing for a week after missing the start of training camp after testing positive for COVID-19. McSorley played the first half, and Huntley came on in the second.

The Ravens did manage three field goals in the first half: a 56-yarder by Justin Tucker and kicks of 42 and 53 yards by Jake Verity.

“I thought they both operated really well,” coach John Harbaugh said. “Trace, he was dealing with a little back spasm issue, so I think that limited his ability to move around the pocket and run around, but he made some good throws and stuff. Then Tyler came in and just played tremendous football.”

Winston threw an 8-yard touchdown pass to Lil’Jordan Humphrey in the second quarter to put the Saints up 14-6, but missed opportunities ultimately caught up with them. New Orleans lost two of its fumbles inside the Baltimore 20.

The Ravens also turned over the ball a couple times, including a fumble by Huntley at the New Orleans 15 in the fourth quarter.

Star running back Alvin Kamara did not play for the Saints, and the Ravens did not use newly acquired receiver Sammy Watkins.

Saints receiver Michael Thomas was at the game wearing a boot. Thomas is recovering from surgery in June for a high ankle sprain. Payton said on the eve of the first practice of training camp that it was disappointing to be without Thomas, and that the procedure should have happened earlier.

Ravens OL Bradley Bozeman went down with what Harbaugh called a minor ankle sprain, and LB Kristian Welch had a shoulder stinger later. Saints DE Tanoh Kpassagnon appeared shaken up in the second quarter but was able to walk off the field easily. 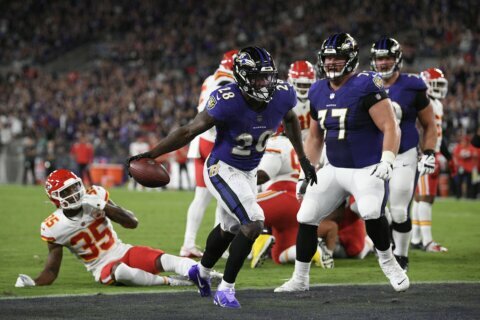