HENDERSON, Nev. (AP) — The Las Vegas Raiders have attended many Vegas Golden Knights games and know how vibrant the local fanbase can be, as the four-year old franchise enjoys one of the most electric atmospheres in the NHL.

Heading into their second season since relocating from Oakland, the Raiders are wired to create their own electricity when they host the Seattle Seahawks in the preseason opener on Aug. 14, and open the regular season at home on “Monday Night Football” against the Baltimore Ravens on Sept. 13.

“The O-line went to a Golden Knights game together and just seeing that energy, seeing how hyped they were just to be in there, just to support the local team, I just can’t wait to see Allegiant Stadium opened up to the public and just hear the crowd,” guard Denzelle Good said Thursday after the second day of training camp. “That was a big factor for me in Oakland. Coming from where I came from when I came to Oakland. That was a big difference. That crowd (was) ridiculous, so I’m ready to see how it is here.”

Several members of the Raiders have been invited to crank the rally siren high atop T-Mobile Arena before the opening puck drop at Golden Knights games, including general manager Mike Mayock, quarterback Derek Carr, wide receiver Henry Ruggs III, tight end Darren Waller, running back Josh Jacobs, and defensive back Johnathan Abram. All have have been witness to a deafening atmosphere.

“It’s gonna be a sold-out game every single game,” Abram said. “On third down, you won’t be able to hear anything.”

“To have a home-crowd advantage for our defense out there, making it more difficult for the opposing teams’ quarterbacks coming in, that’s what we’re most excited about,” Raiders offensive coordinator Greg Olson said. “To see the excitement in the number of players that were at the hockey games and got a chance to ring a horn, they know this is a town that will get behind them when we win.

“The entire team is looking forward to have the stadium full.”

During last year’s disappointing 8-8 campaign that saw the Raiders fizzle down the stretch after a 6-3 record, the team played in front of partially filled stadiums for three road games: at Kansas City (13,311), at Cleveland (10,972), and at Atlanta (9,124).

The Raiders were 2-6 inside an empty 65,000-seat Allegiant Stadium that reverberated with echoes of players shouting from the sidelines, rather than their beloved Raider Nation.

The Golden Knights are 96-38-13 inside T-Mobile Arena and have always credited their fans for the success of making it to three conference finals in four years, and the Stanley Cup Final in their inaugural season.

Now the Raiders are confident it’s their turn.

“We were a couple plays away from being really good in the AFC West,” coach Jon Gruden said. “And we proved we can compete on the road. I’m hoping I can somehow find a way to help our team compete better in our Allegiant Stadium here because it is a spectacular place.

“We need our fans to help us, that’s for sure.”

Lions cut LB Jamie Collins, a week after trying to trade him 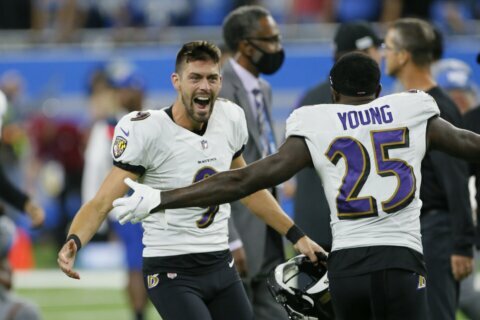