BALTIMORE (AP) — Ravens general manager Eric DeCosta said he could not have hoped for a better scenario in the first round of the NFL draft on Thursday night.

DeCosta confirmed the Ravens did get offers to trade back, However, this was a year where being conservative worked out by getting two players the team had targeted before the draft.

“They say that hope is not a plan,” DeCosta said. “We had a really good plan, but we also had a lot of hope. We had some players that we really wanted to go after. And this is a year that kind of fell the way we wanted it to fall. We were very fortunate to get two players we think are excellent players at their positions. We really feel (they) also fill some really significant needs on our team that we needed to address.”

Baltimore bolstered its beleaguered passing attack with the addition of Bateman. The Ravens ranked last in the NFL last season in yards passing averaging 171.2 per game. Baltimore also attempted the least passes in the league with 406.

The addition of Bateman provides quarterback Lamar Jackson with another downfield threat. Bateman is looking forward to catching passes from Jackson, who was the NFL’s MVP in the 2019 season.

Bateman has solid size — 6-foot-2, 210 pounds — with exceptional hands. He is also a solid route-runner and was ranked was eighth in the country with 20.3 yards per catch in 2019.

He opted out of his junior year due to COVID-19, but decided to return when the Big Ten announced it would have a season. Bateman played five 2020 games and caught 36 passes for 472 yards with two touchdowns.

The Ravens also signed free-agent wide receiver Sammy Watkins this offseason, but Bateman will have a chance to make an immediate impact. Bateman will get the opportunity to line up opposite of fellow wide receiver Marquise Brown, who also has the blazing speed to get behind a secondary.

“I feel like I can play outside or inside,” Bateman said. “I think my work ethic helps me become a better football player each and every day.”

The Ravens turned their attention to defense with their second pick in the first round by selecting Oweh.

The Ravens had a need for a pass rusher after losing three key players to free agency. Matt Judon, who led the team with six sacks last season, signed a new deal with the Patriots as a free agent. Yannick Ngakoue signed with the Raiders after finishing with eight overall, but only three in nine games for Baltimore. Jihad Ward, who signed with the Jaguars, managed three sacks last season.

Oweh is an explosive player that can create matchup problems, Last season, Oweh and Shaka Toney were the first pair of Penn State defensive ends to receive All‐Big Ten first-team honors since Courtney Brown and Brad Scioli in 1998.

However, Oweh did not manage a sack last season. He was not concerned the lack of sacks last season would hurt his draft prospects.

“I knew that people who really understood and watched football understood what I was doing out there,” said Oweh, who did finish with seven sacks over his three-year collegiate career. “I was very disruptive and caused a lot of havoc. I was very stout in the run game. People understood that the zero sacks had no definition of me as a player.”

Oweh is a solid tackler that should fit well with the Ravens defensive system and he’ll have the opportunity to make an impact as a rookie.

“He’s an aggressive player and he runs to the ball very fast,” DeCosta said. “We’re really excited to have him. This player is going to make a difference for us.” 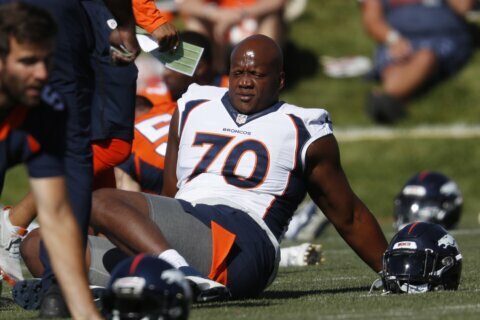