An emotional, uplifting victory on the road against a division rival strongly enhanced the Baltimore Ravens’ chances of reaching the playoffs and provided a positive vibe during a season marred by injuries, a three-game skid and an outbreak of COVID-19.

Now, with a soft schedule in front of them, the Ravens need to get healthy and finish strong.

Baltimore (8-5) used a brilliant finish by quarterback Lamar Jackson and a 55-yard field goal by reliable Justin Tucker to squeeze out a 47-42 victory over the Cleveland Browns on Monday night.

Jackson missed one series and part of another with cramps before emerging from the locker room to lead a pair of scoring drives in the closing minutes after the Ravens’ short-handed defense blew a 14-point lead.

Soon after the epic duel ended, coach John Harbaugh declared, “It’s a game that’s going to go down in history. Our guys had faith and trust and belief, and sometimes, that’s what it takes.”

Baltimore’s defense barely made it to the finish after injuries in the backfield forced special teams standout Anthony Levine to join the fray and cornerback Marcus Peters to limp onto the huddle without consulting with team doctors.

“We had so many guys going down on defense, just trying to get 11 guys on the field was a challenge,” Harbaugh said.

The victory was Baltimore’s second straight following a three-game losing streak perpetuated by a bout with COVID-19 that depleted the roster and caused the rescheduling of matchups with Pittsburgh and Dallas.

Still, the Ravens are not assured a playoff berth, even if they win out against Jacksonville (1-12), the New York Giants (5-8) and Cincinnati (2-10-1). Baltimore is chasing several teams for a wild-card spot, including Miami, also 8-5 but currently with the tiebreaking edge because of winning percentage within the conference.

“All these games coming up are playoff games,” tight end Mark Andrews said.

Baltimore’s strength is its running game, and that was really the key to victory against the Browns in spite of Jackson’s crisp passing in the waning moments. Jackson accounted for 124 of Baltimore’s 231 yards rushing on just nine carries, and the Ravens tallied five touchdowns on the ground. Baltimore has run for at least 100 yards in 36 straight games, seven short of the NFL record.

Pity poor defensive coordinator Don Martindale, who was more concerned with getting healthy bodies on the field than devising a plan to stop Cleveland’s robust attack. The Browns ran for 138 yards and passed for 355. Worse, Cleveland scored three touchdowns in the fourth quarter, the last on a four-play drive that took just 47 seconds from start to finish.

“The offense bailed us out,” cornerback Marlon Humphrey acknowledged.

Gus Edwards ran for 49 yards on only seven carries and had his first two-touchdown game. With Edwards and J.K. Dobbins rambling for big yardage over the past few games, veteran Mark Ingram appears to have been phased out. Ingram didn’t get a carry against the Browns despite being in the starting lineup.

Cornerback Davontae Harris was exposed as the weakest link in the backfield after Jimmy Smith left with a shoulder injury. Claimed off waivers from Denver last month, Harris struggled mightily in coverage before leaving with an injury of his own. His departure paved the way for Levine’s entrance on a night in which defensive backs Tramon Williams and Anthony Averett were inactive.

After Jackson left, Trace McSorley entered as the only backup available at quarterback. McSorley twisted his knee during his second series, leaving wide receiver Willie Snead to start taking practice snaps before Jackson returned. The Ravens placed McSorley on injured reserve on Tuesday, and with Robert Griffin III also on the IR with a hamstring issue, the Ravens will need a backup or two before their next game. … Smith’s shoulder problem came after he already missed three games this year because of an injury. Keeping him healthy has always been an issue, and this year is no exception.

115.6 — That was Jackson’s passer rating versus the Browns, short of a perfect 158.3, but plenty impressive for a quarterback who ran for two scores and was the game’s leading rusher. Jackson went 11 for 17 for 163 yards, a TD and no interceptions, pretty good numbers for someone the critics insist has great legs and a mediocre arm.

The Ravens will be overwhelming favorites Sunday against the visiting Jaguars, whose only real hope to win might be if Baltimore is too overconfident to take them seriously. 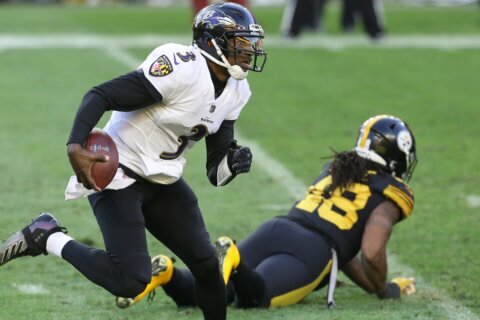