Garrett to call plays for Giants against Ravens on Sunday

EAST RUTHERFORD, N.J. (AP) — Offensive coordinator Jason Garrett will be back calling plays for the New York Giants this weekend after missing a game following a positive test for COVID-19.

Coach Joe Judge said Thursday that Garrett will have finished his mandated isolation by Sunday when the Giants (5-9) face the Ravens (9-5) in Baltimore.

Judge said the only thing not finalized is how Garrett will travel to Baltimore.

Kitchens has been handling the play-calling at practice this week with Garrett working with the team on the online calls.

“It’s kind of crazy having the voice come through a speaker in terms of the install and talking through it when the guys are in the building,” Judge said. “That’s a little bit different. But look, different is really not a challenge for us. We kind of want to thrive in that kind of situation.”

Judge said quarterback Daniel Jones looked good in Wednesday’s workout and he hopes he will be able to return Sunday. He missed the game against Cleveland with ankle and hamstring injuries. He also missed a game against Seattle at the start of the month with a hamstring injury.

Colt McCoy started both of those games.

No matter who plays Sunday, the offense needs some help. The Giants are 31st on offense and they have scored 13 points in the past two losses to fall out of first place in the NFC East.

Kitchens was amused when asked if Santa Claus could bring anything to help the team.

“The first time I’ve ever heard that,” Kitchens said Thursday. “That’s great. But if you know him and you want to get him to send us some, some whatever you were talking about, please feel free. You know, that, elf on shelf, Mrs. Claus, anything you know, just let us know. ” 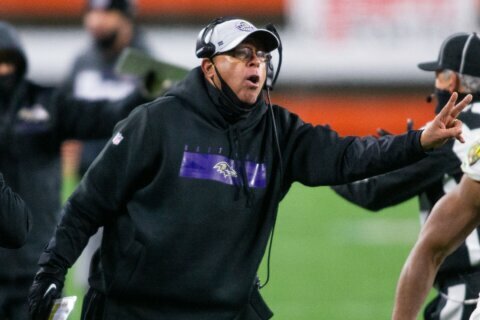