He opened the second half with an up-tempo game plan that got Indianapolis’ defense out of sync. Then, as it wore down, Jackson took full advantage with a series of perfectly timed play calls, including an incredible fake on his 9-yard scoring run to seal a 24-10 victory.

Baltimore surpassed Denver for the most consecutive games with 20 or more points in NFL history. The Ravens have hit the mark 31 straight times, one more than the Broncos from 2012-14.

“We caught the defense off guard,” Jackson said. “The offensive line did a good job and our guys were getting open.“

Jackson’s day didn’t come with the usual gaudy numbers. He was 19 of 23 with 170 yards and no touchdowns and carried 13 times for 58 yards. Most importantly, he had no turnovers.

But the league’s reigning MVP helped the Ravens (6-2) keep pace with the Steelers in the AFC North by making some key adjustments.

After punting on their first five possessions and watching the defense score the Ravens’ only points of the first half, Jackson switched it up. The No. 1 ranked rushing offense transformed into a no-huddle, controlled passing team that quickly seized control and never gave Indy (5-3) a second chance once Gus Edwards gave them a 14-10 lead on a 1-yard TD plunge midway through the third quarter.

Jackson followed with the historic scoring run on the next drive to make it 21-10 with 11:08 remaining.

“Everybody has an assignment and guys have just got to play hard and win their individual battles,” Colts defensive tackle DeForest Buckner said. “I think for the most part we did that, we just had to convert on third downs and get the ball back to the offense.”

How lopsided was the second half? At one point, Baltimore had a 32-4 advantage in plays.

The defense, as usual, also did its part.

Jonathan Taylor gave Indy a 7-0 lead with an early scoring leap then gave it right back when Marcus Peters ripped the ball out of Taylor’s hands. Chuck Clark scooped up the loose ball and sprinted 65 yards, hurdling Philip Rivers, to tie it at 7. The Ravens have now had a takeaway in 21 straight games

Indy snuffed out one Baltimore scoring chance by recovering a fumble near the goal line, but Rivers gave it back on the very next play, courtesy of coach John Harbaugh’s challenge which turned an incompletion into an interception by Peters. That play set up Edwards’ go-ahead score.

Baltimore’s first win in Indianapolis helped extend their league-high road winning streak to 10 and ended a stretch of 20 consecutive losses when trailing at halftime.

“I’m glad we did,” Harbaugh said when asked about going fast in the second half. “I thought it was a good move. That made a big difference in the game.”

Ravens: They came in already down three key players — left tackle Ronnie Stanley, cornerback Marlon Humphrey and linebacker L.J. Fort. Defensive end Calais Campbell hobbled off the field with a strained left calf injury on the third play of the game. He did not return, though Harbaugh said it wasn’t a serious injury. Cornerback Khalil Dorsey also injured his shoulder in the first half.

Colts: Four-time Pro Bowl receiver T.Y. Hilton was inactive because of a groin injury he suffered in last week’s win at Detroit. Pro Bowl tight end Jack Doyle left late in the first half with a concussion. Linebackers Darius Leonard and Anthony Walker also were injured in the second half. Leonard later returned.

Ravens: Baltimore ran 38 times for 110 yards as a team, posting its 31st consecutive 100-yard game. It breaks a tie with Carolina for the league’s third-longest streak since the 1970 merger. … Jackson improved to 25-5, tying Hall of Famer Dan Marino for the best 30-game start in league history. … Baltimore leads the league with 12 defensive touchdowns since 2018. … Harbaugh’s brother, Jim, also was on the sideline in Indiana this weekend for Michigan’s game at Indiana.

Colts: Rivers was 25 of 43 with 227 yards and one interception, falling 4 yards short of passing Marino for fifth on the NFL’s career passing list. … Jordan Wilkins carried 11 times for 39 yards, helping the Colts churn out 112 yards on the ground. … Indy fell to 3-1 at home this season and lost for the first time in three games.

Colts: Will play for the AFC South lead Thursday night at Tennessee. 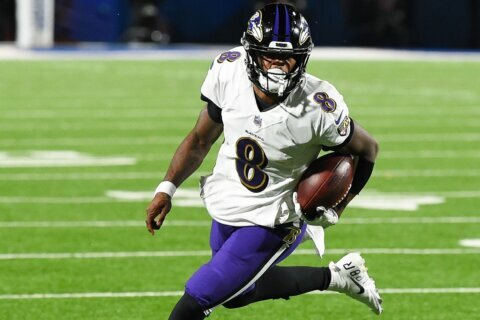 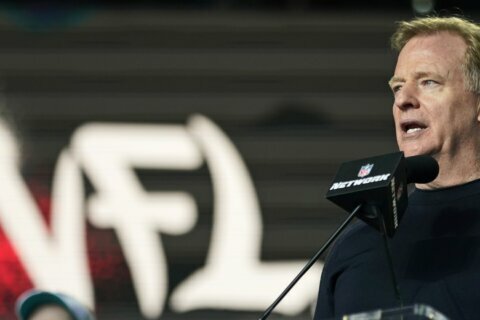