The Baltimore Ravens took a little time to savor their 14th consecutive regular-season victory, a rout of defending AFC South champion Houston on the road. Then they turned their attention to an even bigger challenge: a Monday night matchup at home against star quarterback Patrick Mahomes and the Super Bowl champion Kansas City Chiefs.

Baltimore (2-0) never trailed Sunday against the Texans, bolting to a 10-0 lead and amassing 407 yards — along with a defensive touchdown — in a 33-16 win. Mark Ingram accounted for 55 of the Ravens’ 230 yards rushing, including a 30-yard TD with a direct snap on a fourth-and-1 to clinch it.

Ingram intended to review footage of the game on his laptop during the flight back to Baltimore, but he knew after that it was time to start thinking about Kansas City (2-0).

“We’ll enjoy this on our plane ride home, and then we’ll be focused on the Chiefs,” Ingram said. “They’re the defending champs, and we know we’re going to have to play our best football, put our best foot forward in order to get a W.”

Coach John Harbaugh and his staff spent the better part of Monday looking over film of the Houston game, but he acknowledged that the Chiefs were on his mind.

“You can’t help it,” Harbaugh said.

Ravens quarterback Lamar Jackson is 21-3 as a starter during the regular season. Two of those defeats have come against the Chiefs, 27-24 in overtime in 2018 and 33-28 last year.

Jackson, the reigning NFL MVP, threw for 204 yards and ran for 54 against Houston. He even lined up as a wide receiver on Ingram’s score, a testament to his willingness to do whatever it takes to win.

Asked afterward how soon he planned to start turning his attention to the Chiefs, Jackson replied: “Tomorrow I’ll be right on it.”

The Ravens’ rushing game continues to punish opponents, and it’s not just Ingram and Jackson.

Gus Edwards rambled for 73 yards and rookie J.K. Dobbins tallied 48, including 44 on a fourth-quarter jaunt — part of Baltimore’s 186 yards on the ground after halftime.

“Offensive line was doing a great job getting that push, getting the defensive line on their toes,” Jackson said. “And our backs are just explosive and they’re good. That’s why we got them here.”

Jackson was sacked four times by an aggressive Houston defense and threw under duress for much of the first half.

“A lot of times as the pocket begins to tighten up a little, Lamar is going to find guys open,” Harbaugh said. “This time, there weren’t always guys open and he had to eat the ball. Sometimes, you’ve got to take the sack. I’m not (feeling) great about four sacks, but that’s a good pass-rush team.

“In the end, you’ve got to keep getting better at everything every single day, and that’s one of those things.”

Linebacker L.J. Fort showed his value and deft ball-carrying ability while running back a fumble 22 yards for a score to make it 20-7. Fort shrugged off a would-be tackler with a stiff arm and dived to hit the right pylon.

“It was huge,” defensive tackle Calais Campbell said. “He had a little bit of running back skills. He got the ball in there and he knew what to do with it. You could tell he played running back in high school.”

TE Mark Andrews, who is usually Jackson’s go-to guy, was limited to only one catch. It wasn’t so much Andrews’ fault as it was Jackson’s inclination to spread the wealth: The quarterback connected with nine different receivers on Sunday.

Defensive back Tavon Young tore his ACL and is lost for the season. The Ravens initially thought the injury was worse, but it’s a tough blow for a player who missed the entire 2019 season with a neck injury.

“It’s only a torn ACL, so that’s a positive,” Harbaugh said. “He’ll have surgery and is going to rehab. He’ll fight his way back, there’s no question about it. Our hearts go out to him on that.”

“We’re just going to have to figure out what we’ll do next during the course of the week and we’ll have a plan for Monday night,” Harbaugh said.

10. Since Don Martindale was named defensive coordinator before the 2018 season, the Ravens have scored 10 defensive TDs, including Fort’s against the Texans.

Baltimore had six defensive touchdowns last year, the most in the NFL.

The game against the Chiefs is a rare Monday nighter in Baltimore, and there won’t be any fans in the stands to share in the fun. 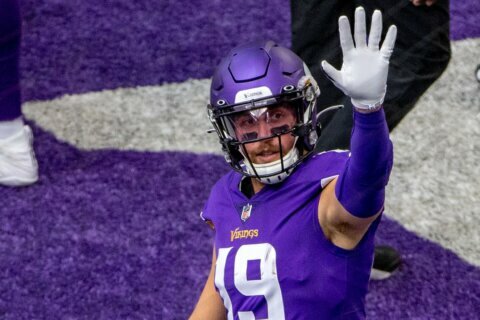 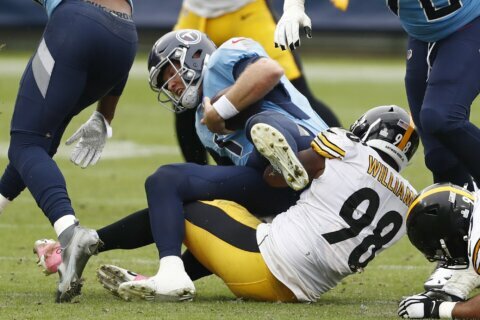 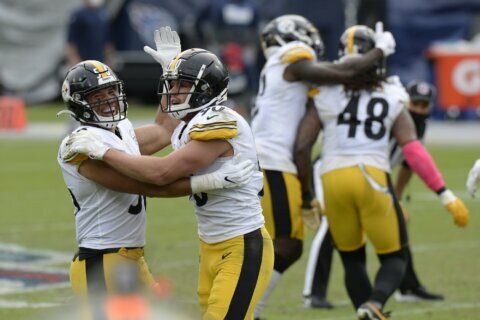