Houston Texans do little right as they lose to Chiefs again

HOUSTON (AP) — The Houston Texans started this season the same way they ended the last one by losing to the Kansas City Chiefs.

The offense had trouble sustaining drives and the defense couldn’t get off the field in the 34-20 loss. Now they’ll have a few extra days to figure out what went wrong and how to fix it before a visit from Lamar Jackson and Ravens on Sept. 20.

In their playoff loss last season, the Texans took a 24-0 lead before the Chiefs scored the next 41 points in the 51-31 victory. Houston took a 7-0 lead on Thursday night, but couldn’t do much right after that as the Super Bowl champs scored the next 31 points to cruise to another win.

The offense struggled to make big plays in its first game without superstar receiver DeAndre Hopkins, often settling for short gains as the Texans had to punt on three of their first five drives. Quarterback Deshaun Watson lamented the lack of opportunities to take shots downfield in his first game since signing a four-year, $160 million contract on Saturday.

“That was the only thing that we didn’t do,” Watson said. “They did a good job of getting back to me.”

Houston’s running game was solid in the first game with David Johnson as the featured back after he was acquired in the trade with Arizona for Hopkins. Johnson had 77 yards rushing and a 19-yard touchdown run to lead the team on a night the Texans finished with 118 yards on the ground. Watson added 27 yards rushing and scored on a 1-yard run in the fourth quarter.

Watson was impressed with Johnson’s work in his debut with the team. Johnson is looking to bounce back after running for just 345 yards last season.

“He’s a hard runner, great vision. Plays until the final whistle,” Watson said. “He’s finding a new rhythm in a new offense. So, he did a good job of making plays and running the ball.”

The Texans signed left tackle Laremy Tunsil to a three-year, $66 million contract this offseason to anchor the offensive line and provide continuity in its effort to better protect Watson. Tunsil and the rest of the line didn’t do a very good job of that in the opener. Watson was sacked four times and hit seven more on a night when he was under near-constant pressure.

Receiver Will Fuller had eight receptions for 112 yards in his first game as Houston’s No. 1 receiver with Hopkins in Arizona. The Texans are counting on Fuller to have a big season in his fifth year in the league after he’s shown flashes of brilliance in his first four seasons but has missed 22 games because of injuries.

Receiver Kenny Stills was supposed to be an important part of the offense in his second season in Houston after a trade from Miami in 2019. He was targeted just twice and finished with zero yards receiving.

RB Duke Johnson left Thursday’s game with a leg injury and did not return. O’Brien said he did not have an update.

1 – The Texans had just one sack of Patrick Mahomes on Thursday night as the 2018 MVP had ample time to throw throughout the game.

The top priorities for the Texans must be to improve their pass protection and pass rush before their date with the Ravens. If they do that Watson should have more time to find receivers downfield to convert the big plays the Texans were lacking against the Chiefs. Improving the pass rush should help them get off the field on third down and have a more balanced time of possession; Kansas City had the ball for almost nine minutes more than they did on Thursday. 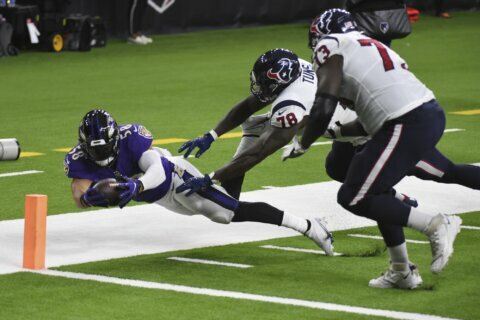 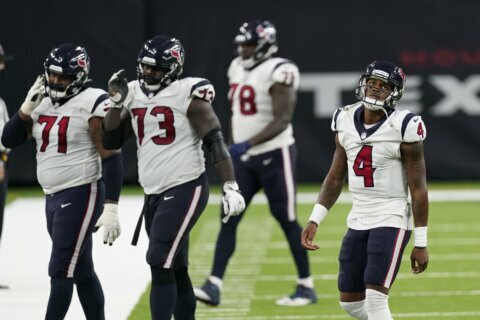