KANSAS CITY, Mo. (AP) — Patrick Mahomes threw a fake jump pass before unloading a real one downfield. He tossed an under-handed shovel throw to his fullback for a touchdown. He found his speedy wide receiver streaking toward the end zone for another score, and he hit his big left tackle for yet another one.

On the biggest stage of the NFL season to date, Mahomes showed why he’s the highest-paid player in the league.

The reigning Super Bowl MVP finished with 385 yards passing and four touchdowns without an interception, and he added another score on the ground.

In doing so, he not only outperformed reigning league MVP Lamar Jackson, but he effortlessly led Kansas City to a 34-20 rout of the Baltimore Ravens in their Monday night showdown.

“I know who we are and what we’re capable of,” Ravens defensive lineman Calais Campbell said, “and he was able to go out there and do some great things against us. So you have to take your hat off to him and give him some respect.”

Along with about a half-billion dollars.

That record-setting contract extension that Mahomes signed in the offseason is looking like a bargain.

Through three weeks, Mahomes has nearly 900 yards passing with nine touchdowns and no picks, and he’s done it against some tough opposition. The Chiefs already have dispatched the Texans at home and Chargers and Ravens on the road.

“He’s elite. He’s an extremely elite quarterback,” Ravens cornerback Jimmy Smith said. “Arm strength is just unbelievable, but I think it’s just his command of their offense, how well that whole team executes for him, and then just his ability alone. He knows how to make the hard throws and he fits the ball in tight pockets.”

When Mahomes is playing at that level, Smith said, he is downright impossible stop.

The defense was overshadowed by Mahomes’ magnificence, but it performed exceptionally well against Jackson and a talented Ravens offense. Jackson was held to 97 yards passing and sacked four times, and while he did escape for 83 yards on the ground, running backs Gus Edwards, Mark Ingram and JK Dobbins combined for just 75.

“They go about everything and anything that you are able to see,” Chiefs coach Andy Reid said, “and they just do it naturally. I don’t know how they learn all of that, but they do, and they do it so well and accurate. They always have a little wrinkle.”

The special teams were hardly special. Harrison Butker missed an extra point and field goal one week after hitting three kicks of 50-plus yards, including a Chiefs record-tying 58-yarder to give them an overtime win in Los Angeles. The Chiefs also gave up a kickoff return for a touchdown when the game was still hanging in the balance.

Clyde Edwards-Helaire continues to show why the Chiefs used a first-round pick on him. The running back out of LSU had 20 carries for 64 yards against a tough Baltimore front, rarely going down on first contact, and he added five catches for 70 yards in the passing game. It was enough to keep the Ravens honest and give Mahomes some openings downfield.

Special teams coach Dave Toub has been in the running for head coaching jobs because of his knowledge and ability in both the kicking and return game. But Toub has some work to do after an ugly performance by most of his units on an otherwise pretty night for Kansas City.

Rookie cornerback L’Jarius Sneed, who nearly picked off his third pass in three games, hurt his collarbone when he landed awkwardly on the play. Defensive tackle Chris Jones was a nightmare for Jackson before leaving with a tweaked groin late in the game. Guard Andrew Wylie made it to the stadium before he was rushed to the hospital for a possible case of appendicitis, though Mike Remmers played fairly well on short notice in his place.

12 — The Chiefs have won that many consecutive games to set the franchise record, a run that includes their comeback-style charge to their first Super Bowl title in 50 years. They also have won nine straight in the regular season.

After back-to-back road games, the Chiefs (3-0) return to Arrowhead Stadium on Sunday to face Cam Newton and the new-look Patriots. New England (2-1) bounced back from a loss to Seattle by beating the Raiders last weekend. 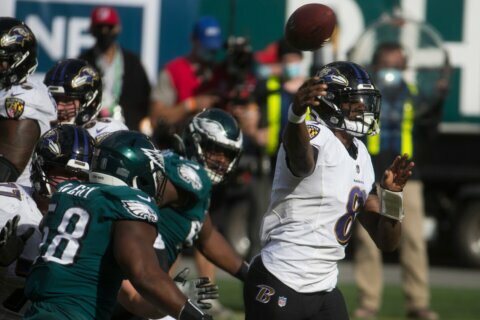