Lamar Jackson directed two scoring drives during a limited appearance, had an impressive touchdown run erased by a penalty and sparked the Baltimore Ravens to a 26-13 victory over the Green Bay Packers, who played Thursday night without quarterback Aaron Rodgers.
(1/5) 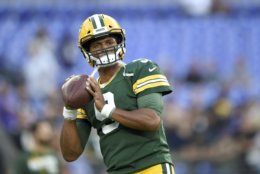 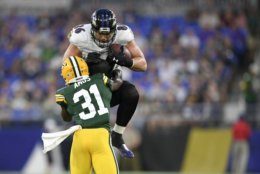 BALTIMORE (AP) — It didn’t matter that it was merely a preseason game, or that the Green Bay Packers were chasing him, or that his health is of the utmost importance to the Baltimore Ravens.

Given the opportunity to run, Lamar Jackson couldn’t resist.

Jackson juked and hopped during an impressive highlight-reel touchdown, and though it was wiped out by a penalty, the second-year quarterback sparked Baltimore to a 26-13 victory Thursday night.

The Packers played without quarterback Aaron Rodgers, who developed back stiffness and was a late scratch . After being held out of Green Bay’s first preseason game against Houston, the seven-time Pro Bowl star was slated to start for the first time under rookie head coach Matt LaFleur.

“No long-term concerns. He was a little tight yesterday,” LaFleur said. “This is all precautionary. You never want to put him at risk, put him out there, if he’s not 100%. It was a game-day decision.”

Jackson, on the other hand, needed the work. Coming off a rookie season in which he didn’t start until mid-November, Jackson is seeking to master a new playbook devised by first-year coordinator Greg Roman.

Jackson started and played three series last week in a 29-0 rout of Jacksonville. This time, the 2016 Heisman Trophy winner stuck around for two possessions, both of which ended with field goals. He completed 6 of 10 passes for 58 yards and ran twice for 14 yards.

His best play displayed both his speed and elusiveness, but ultimately went for naught. On third-and-10 from the Green Bay 18, Jackson thrust forward from the pocket, sidestepped Tramon Williams and jumped over Jaire Alexander at the 5. He then high-stepped through the end zone before handing the ball to a fan.

Instead of being horrified at seeing his standout quarterback frolicking in the middle of the field, coach John Harbaugh loved it.

“It’s not like he’s trying to run, but sometimes, what are you going to do?” Harbaugh said. “You can’t hold him back forever.”

Jackson has no intention of standing in the pocket when there’s a wide-open field in front of him.

“The four-man rush gave me a lane, our receivers were covered and I just did what I do best,” he said.

The play was called back because of an illegal block by Willie Snead, and Baltimore (2-0) settled for the second of Justin Tucker’s four field goals.

Rodgers has played 165 regular-season games since breaking into the league in 2005, so there was really no pressing need to get him into a game three weeks before the Sept. 5 opener against Chicago.

Instead, DeShone Kizer, Tim Boyle and Manny Wilkins struggled against a defense that last year was ranked No. 1 in the NFL.

Maybe Rodgers will get to play next week. If not, the Packers will make do without him this month.

“I think we’d like to see him, but you’re talking about a veteran quarterback that’s played a lot of football,” LaFleur said. “I don’t think it’s a necessity, but it’s certainly something we’d like to see.”

Rodgers exchanged pleasantries after the game with Jackson, but declined to talk with the media.

Green Bay (1-1) got its lone touchdown in the third quarter on a 7-yard pass from Boyle to rookie Darrius Shepherd.

Jackson couldn’t resist talking to Rodgers after the final whistle.

“I was like, ‘What’s up, G.O.A.T?” Jackson said, using an acronym for Greatest Of All Time. “There are a lot of G.O.A.T.s out here, but it is Aaron Rodgers, so I have to show my respect. It was pretty cool seeing him.”

Harbaugh revealed that CB Tavon Young will likely miss the season with a neck injury that happened during practice. … Ravens LB Chris Board sustained a concussion in the second quarter.

Ravens tight end Nick Boyle had every intention of leaping over Adrian Amos after catching a first-quarter pass. Problem is, Amos stayed upright. So Boyle ended up planting a foot in Amos’ chest and was thrown backward.

Packers: A matchup against the Oakland Raiders next Thursday comes with a twist. The game will be held north of the border in Winnipeg.

Ravens: Following two days of joint practices with the Eagles next week, Baltimore plays on Thursday night in Philadelphia.