Trey Mancini played in Baltimore on Thursday night for the first time since the Orioles sent him to the Houston Astros a day before the Aug. 2 trade deadline.
Listen now to WTOP News WTOP.com | Alexa | Google Home | WTOP App | 103.5 FM
(1/3) 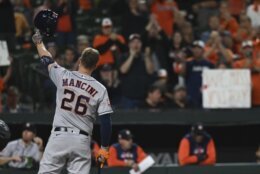 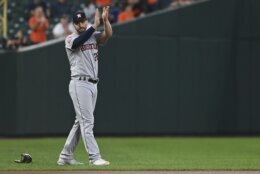 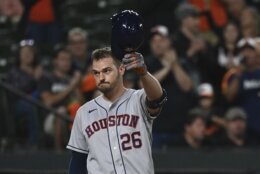 BALTIMORE (AP) — Even before he arrived at Camden Yards as a member of the road team, this visit was already different for Trey Mancini.

“I rode the bus for the first time ever here,” he said. “Got dropped off down here, rather than parking in the parking lot.”

Mancini played in Baltimore on Thursday night for the first time since the Orioles sent him to the Houston Astros a day before the Aug. 2 trade deadline. Mancini received a standing ovation in the second inning when he came to the plate for the first time, then struck out looking.

“The fans and I here have such a good relationship, and they’re always going to be a special part of my baseball experience,” Mancini said before the game. “So I’m definitely looking forward to it.”

The warm reaction from the fans wasn’t a surprise. Mancini played for the Orioles from 2016 until this August. When he missed all of 2020 following a colon cancer diagnosis, then returned and won Comeback Player of the Year honors in 2021, it was one of baseball’s heartwarming stories.

“That was my first time ever dealing with somebody being told they have cancer in my office, with parents there and loved ones, and listening to the doctors talk, and that was a day that I will never forget,” Orioles manager Brandon Hyde said. “I just learned so much from him, honestly, during that time — somebody that’s gone through this insane adversity. A young guy, getting this cancer that’s so rare for somebody his age, and to deal with it the way he did was so inspiring.”

The last time Mancini batted at Camden Yards as an Oriole was July 28. Fans gave him a big ovation, just in case he was traded before the team’s next home game, and he hit an inside-the-park home run.

Baltimore has remained in the postseason race even without Mancini, although the Orioles are running out of time. They entered Thursday four games behind Seattle for the final wild card in the American League.

Mancini and the Astros have already clinched the AL West title, setting him up to play in the postseason for the first time. He made his major league debut in 2016 — the last time Baltimore qualified — but played only five games for the Orioles that year and wasn’t a participant when they lost at Toronto in the wild-card game.

From then on, Mancini hit over 20 homers in every season he played for Baltimore until he was traded this year. On Thursday, he was back, but in the visitors’ clubhouse this time.

“I didn’t really know where anything was in the locker room, where the kitchen was, anything like that,” he said. “So it was a little strange being in such a familiar place but being so unfamiliar with part of it.”

Before the game started, Mancini received a brief tribute on the scoreboard and fans gave him a nice ovation. He doffed his cap and clapped his hands in response. Then came the lengthy reception before his first at-bat. 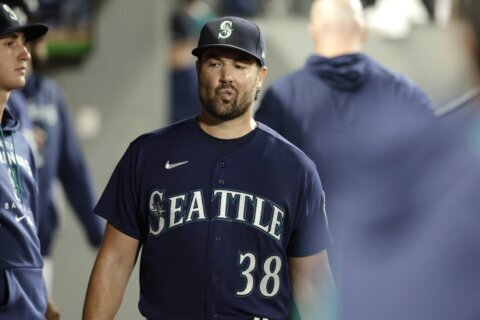 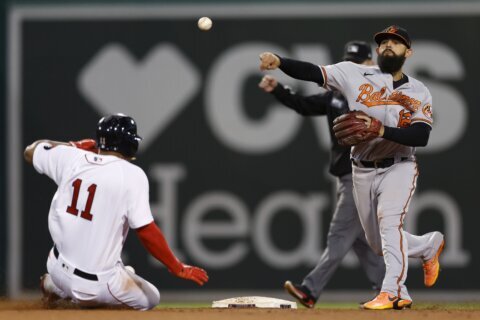