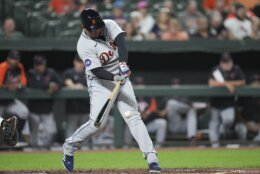 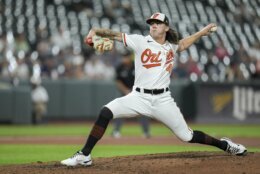 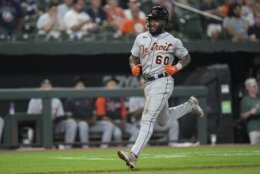 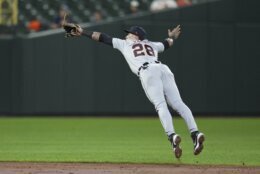 BALTIMORE (AP) — Long after it became apparent Baltimore was going to lose ground in its pursuit of a playoff berth, there still was an aura of mystery surrounding this mismatch between the Orioles and Detroit Tigers.

As Tyler Alexander stacked one hitless inning after another, the tension mounted with every pitch.

“You get in the seventh inning, and you start wondering if we’re seeing something,” Detroit manager A.J. Hinch said.

Alexander’s no-hit bid ended in the seventh, but that might have been the only downer for the Tigers in an 11-0 blowout Monday night.

Baltimore fell five games behind Seattle in the race for the last of three AL wild-card spots. Both teams have 16 games left, and the Mariners own the tiebreaker advantage for winning the season series.

Alexander (4-10) permitted only two baserunners over the first six innings, both on walks, before Ryan Mountcastle led off the seventh by lofting a single in front of Riley Greene in center. Anthony Santander followed with another single, but both runners were stranded.

Prior to that, the closest Baltimore came to a hit was in the sixth, when Ryan Kreidler snagged Adley Rutchman’s two-out grounder down the third-base line and fired the ball to first.

Alexander matched his career high by pitching seven innings. The lefty, who struck out four, was winless in four starts since Aug. 20.

“I had fastball command for the first time in a while, which was good. It opened up a lot of the plate,” Alexander said.

As the game went on he couldn’t help thinking of a no-hitter, but the 28-year-old tried not to get ahead of himself.

“I just kept telling myself, dominate the next inning,” he said.

When his bid for history ended, Alexander took solace in the fact that he was dominant for seven shutout innings.

“I wasn’t too upset when the ball landed. At that point, I just wanted to get through seven clean,” he said. “And then with the hit by the next guy, I’m glad I kept it together and put up another zero.”

Will Vest worked the eighth and José Cisnero completed the two-hitter.

After losing six of their previous seven games, the last-place Tigers took control with a five-run fourth against Tyler Wells (7-7) that made it 6-0. Greene contributed an RBI double, and he doubled in two runs in the sixth for an 8-0 lead.

Detroit’s Miguel Cabrera returned from a stay on the injured list with a left biceps strain to contribute two singles and an RBI. The two hits moved the 39-year-old into a tie with Cap Anson for 24th with 3,081.

After their 10th shutout loss of the season stalled their pursuit of a wild-card berth, the Orioles tried to look ahead.

“Tonight was just nothing went right for us, and hopefully we can rebound tomorrow,” manager Brandon Hyde said. “We’ll turn the page on this.”

Detroit hired 36-year-old Scott Harris to be president of baseball operations following his successful three-year stint as general manager of the San Francisco Giants. Harris takes over for Tigers GM Al Avila, who was fired on Aug. 10.

Hinch said Cabrera will be given Tuesday off and return to the lineup for the series finale Wednesday night. Hinch outlined the schedule because when the Tigers were in town last year, he rested Cabrera so the slugger could seek his 500th career homer at home. “I don’t want get booed again by the fans when I sat him at 499,” Hinch said. “I had a fan tell me I owed him 50 bucks for the ticket he bought.”

Orioles: Still nursing a sore elbow after being hit by a pitch on Saturday, Mountcastle served as the designated hitter instead of playing first base.

The Orioles attempt to make up ground in the wild card race on Tuesday night, sending Austin Voth (5-2, 4.36 ERA) to the mound against the Tigers and rookie left-hander Joey Wentz (1-2, 4.15). 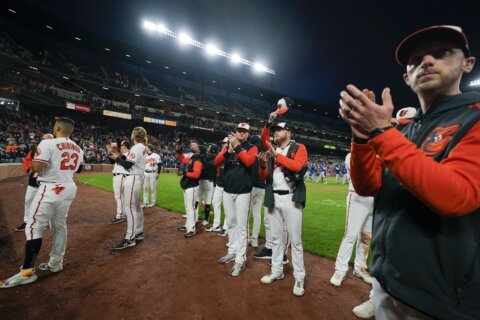 Ahead of schedule, Orioles returned to contention in 2022 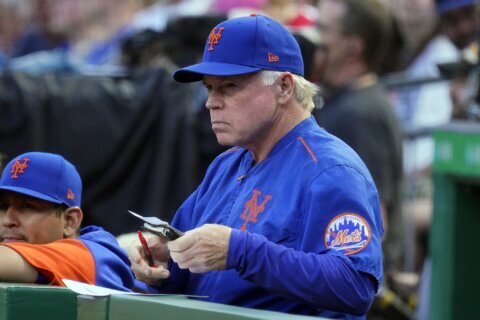