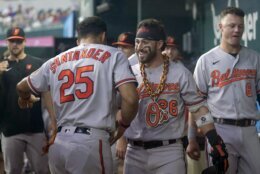 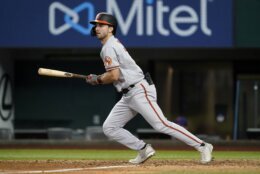 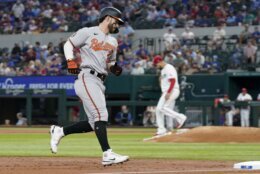 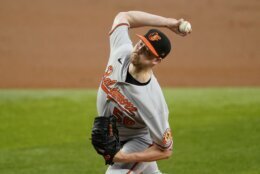 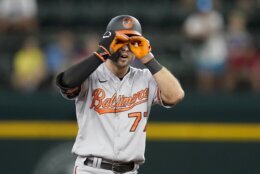 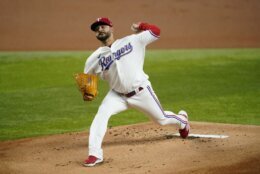 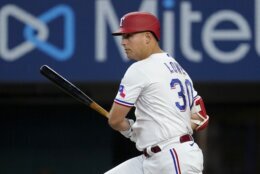 ARLINGTON, Texas (AP) — The Baltimore Orioles are still winning games after trading slugger Trey Mancini and closer Jorge López, and still hope to have plenty to play for this season.

“I think our guys did a great job of of understanding what’s still ahead of us,” manager Brandon Hyde said after the O’s completed their first season series sweep over Texas with a 6-3 win on Wednesday. “We’re gonna miss those guys, no doubt. Those are friends and great teammates and they’re hard to replace. But also we still have a season to play, and our guys are playing to win.”

Pinch-hitter Terrin Vavra lined a tiebreaking RBI double right after a disputed stolen base with two outs in the eighth inning. The Rangers challenged when Jorge Mateo was ruled safe with his 26th stolen base, and the call stood after a replay review of the bang-bang play. Vavra then doubled into left-center for his first career RBI and a 3-2 lead, and Robinson Chirinos, who homered in the seventh, singled him home with his third hit.

“It says a lot about these guys,” Chirinos said of the sweep during an emotional week. “Brandon in the meeting a couple days ago said the guys we have here is what we have. So we just have to go out, compete and keep playing good baseball. And that’s what we did here in Texas.”

Ryan McKenna also went deep for the Orioles (54-51), who swept all three games in Texas like they did at home a month ago. Baltimore already has two wins more than all of last season, and is only 1 1/2 games behind in the race for the American League’s last wild-card spot.

General manager Mike Elias joined the team on the road the day after the trade deadline. He met with several core players individually and said he was excited that he was going to be signing players this winter.

“Anything’s possible when your team is young and talented, and I knew that something like this, this team coming together the way it has this season, was possible,” Elias said. “But it definitely wasn’t something that we were banking on happening. And now that we’re here, it makes it so much easier to plan going forward to supplement this group.”

Jonah Heim and Marcus Semien homered for Texas, which lost its seventh consecutive home game and dropped a season-worst 12 games under .500 at 46-58 overall.

Texas was swept in a series of at least three games for the fourth time this season. All of those games have come since the since the start of July.

“Things aren’t great right now, but that doesn’t mean it has to end that way,” Rangers manager Chris Woodward said. “The games are going to keep coming and as I say that a lot. … We cannot give in right now, and we have to come out fighting and scratching and clawing.”

Rangers starter Martín Pérez matched his career high with nine strikeouts over six innings. The All-Star lefty, who exited with the game tied 1-1, matched a franchise record by making his 19th consecutive start without a loss.

Pérez twice struck out the side, including with the bases loaded to end the fifth when he slammed his hand in his glove after getting out slugger Anthony Santander.

While Pérez was seen as a potential trade target for contending teams, the Rangers held on to their homegrown starter who returned this season after three years away. He is 9-2 since losing his first two starts, and has expressed a desire to remain in Texas. The other Rangers pitcher to make 19 starts in a row without a loss was Cole Hamels, with 12 wins in a row from 2015-16.

Santander’s RBI double in the ninth extended his hitting streak to 14 games. … Rangers 1B Nathaniel Lowe has a career-best 10-game hitting streak.

Rangers: Corey Seager was the designated hitter for the third game in a row after missing three in a row with a lower right leg contusion after fouling a ball of his leg. Woodward said Seager should be back at shortstop Thursday.

Orioles: A day off before opening an interleague series at home against Pittsburgh on Friday night.

Rangers: Left-hander Cole Ragans, their first-round draft pick in 2016, makes his big league debut when the Rangers host the Chicago White Sox on Thursday night. The 24-year-old Ragans had Tommy John surgery twice in 14 months (March 2018 and May 2019). He was 8-5 with a 3.04 ERA and 118 strikeouts in 94 2/3 innings in 18 starts combined for Triple-A Round Rock and Double-A Frisco. 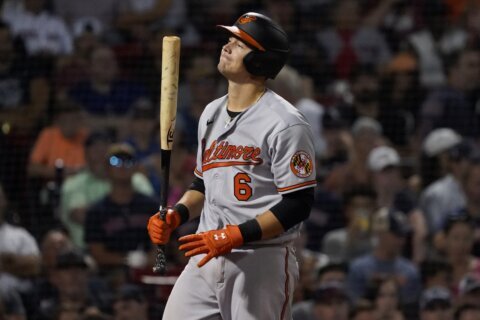