Dean Kremer pitched impressively into the seventh inning and Félix Bautista held on through a dicey ninth to lift the Baltimore Orioles to a 1-0 win over the Pittsburgh Pirates on Friday night.
Listen now to WTOP News WTOP.com | Alexa | Google Home | WTOP App | 103.5 FM

BALTIMORE (AP) — Dean Kremer took a shutout into the seventh inning before eventually giving way to the Baltimore bullpen.

This season, that must be a pretty comfortable feeling.

“It’s been fun to watch them all season,” Kremer said. “They’ve got a little bit of everything. Anything you can think of, they got it. Except we don’t have any submarine guys. That’s about it.”

Kremer pitched impressively into the seventh and Félix Bautista held on through a dicey ninth to lift the Orioles to a 1-0 win over the Pittsburgh Pirates on Friday night.

Ramón Urias singled home the game’s only run in the sixth after the Orioles squandered several chances earlier in the game. That was enough for a Baltimore team that has emerged as a surprising postseason contender recently.

Kremer (4-3) allowed four hits and struck out two. He escaped a first-and-third, one-out jam in the second when Cal Mitchell bounced into a double play. Then Kremer didn’t allow a baserunner for the next four innings.

After Ke’Bryan Hayes hit a one-out double in the seventh, Kremer turned the game over to the bullpen, which again came through for the Orioles. Cionel Pérez got five outs and Bautista pitched the ninth for his fourth save.

The Orioles traded closer Jorge López to Minnesota shortly before the deadline, but Bautista has been excellent this season and seems capable of filling the role. He allowed a one-out single by Ben Gamel and a nine-pitch walk by Hayes. Then rookie Oneil Cruz struck out swinging and Kevin Newman went down looking.

Baltimore went 2 for 15 with men in scoring position. The Orioles put the leadoff man on in each of the first four innings, and in three of them had a runner on second with nobody out.

Ryan Mountcastle lined into a double play with men on second and third to end the first. Another double play in the fourth derailed a rally after the first two batters reached base.

“Usually when you squander that many early, you’re expecting something not good to happen,” Baltimore manager Brandon Hyde said. “Fortunately for us, Dean Kremer — I mean, that was his best outing of the year.”

Anthony Santander opened the bottom of the sixth with a double, and after Mountcastle failed to advance him with a groundout, rookie Terrin Vavra hit a comebacker off Keller for an infield single. Then Urias hit a chopper that snuck into left field to put the Orioles ahead 1-0.

The game was delayed for 109 minutes at the start, and the rain lingered after play began, but the crowd of 25,613 was spirited, perhaps energized by a Baltimore team that’s now won 31 of its last 47 games.

Umpire Carlos Torres came down with a non-COVID illness before the game, so a three-man crew was in charge. This became an issue when batters attempted to check their swings and there was no ump positioned near third to make the call.

The Pittsburgh dugout erupted when Baltimore’s Brett Phillips — batting with the bases loaded and two out in the eighth — was ruled to have held up on a pitch by Yohan Ramirez. Pirates manager Derek Shelton was ejected and said afterward he didn’t agree that the play could be appealed to an umpire not far from second.

“I know it’s very challenging, but I don’t understand how we can go to a guy in the middle of the field for that call. I don’t think that’s right,” Shelton said. “I think when you have a three-umpire crew, it should be the home plate umpire’s call.”

Phillips ended up popping out.

Both teams were coming off impressive three-game sweeps — Baltimore against Texas and Pittsburgh against Milwaukee.

Vavra had three hits and is now 6 for 13 in his short time in the big leagues. His second-inning single made him the first Baltimore rookie to reach safely in seven straight plate appearances since Jerry Hairston Jr. in 1999, according to information from the Elias Sports Bureau provided by the Orioles.

That streak ended when he reached on an error in the fourth, but then he added two more singles.

“His at-bats have been so good,” Hyde said. “I’m so impressed with the ability to take pitches off the plate. I really like the short swing.”

Orioles: OF Austin Hays (side) did not play.

Baltimore sends Austin Voth (1-1) to the mound Saturday against Pittsburgh’s JT Brubaker (2-9). The Orioles will have a pregame ceremony celebrating the 30th anniversary of Camden Yards. 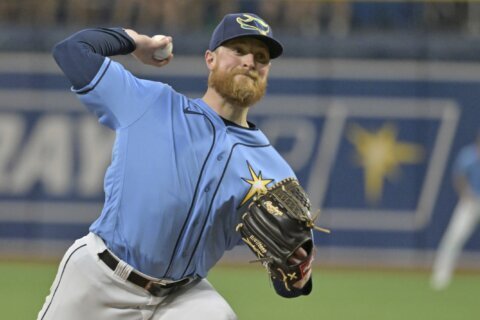 Orioles 1B Ryan Mountcastle out of lineup due to sore hand