Eric Hosmer hit a go-ahead RBI double in the sixth inning just after Baltimore rallied to tie it, and the Boston Red Sox held on for a 4-3 victory over the Orioles on Thursday night to snap a four-game losing streak.
Listen now to WTOP News WTOP.com | Alexa | Google Home | WTOP App | 103.5 FM
(1/5) 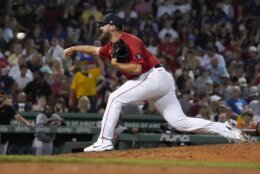 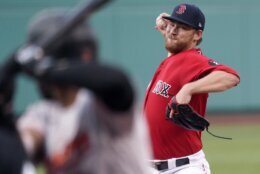 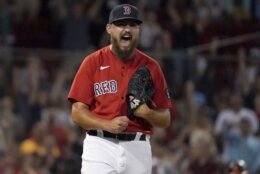 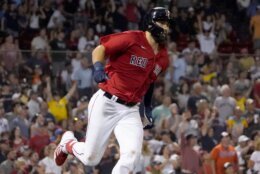 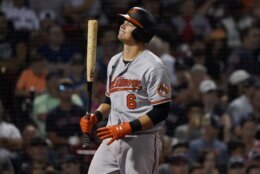 BOSTON (AP) — Eric Hosmer hit a go-ahead RBI double in the sixth inning just after Baltimore rallied to tie it, and the Boston Red Sox held on for a 4-3 victory over the Orioles on Thursday night to snap a four-game losing streak.

Tommy Pham and Alex Verdugo also had RBI doubles for Boston, which had lost six of seven and was in danger of carrying a five-game skid into a weekend series with the AL East-leading New York Yankees.

“It was a tough one but a good one,” Boston manager Alex Cora said.

Reliever Austin Davis (2-1) got the win by closing out the sixth after the Orioles scored three to tie it. John Schreiber pitched a scoreless ninth for his fourth save.

Terrin Vavra hit a two-run triple for the Orioles, who were off to a 7-1 start in August.

Vavra’s triple to right with two men on in the sixth pulled Baltimore within 3-2, then the Orioles were able to tack on another run when they challenged a call at first base that would have ended the inning. After a video review, which showed Austin Hays beating the throw, the call was reversed and Vavra’s run counted, tying it up briefly.

“We had a really nice rally to come back,” Orioles manager Brandon Hyde said. “Vavra with a huge hit for us there but we didn’t score after that.”

J.D. Martinez drew a two-out walk from Dean Kremer (4-4) and Hosmer followed with a double to right off of reliever Nick Vespi. The run was charged to Kremer, who pitched 5 2/3 innings and allowed four runs on six hits. He walked one and struck out six.

“I thought Winckowski was good. I thought he gave us a lot of trouble,” Hyde said.

After a leadoff single by Jarren Duran in the second, Pham lined a double down the left-field line and Duran came all the way around from first. It was the fourth double for Pham in nine games with Boston, which picked him up at the trade deadline in a deal with the Cincinnati Reds. Pham scored on a sacrifice fly by Xander Bogaerts to put Boston up 3-0.

Matt Barnes pitched a scoreless seventh and has allowed just two hits over 3 1/3 innings since coming off the injured list with inflammation in his right shoulder. Barnes credited Winckowski, a rookie who just made his big league debut on July 31, with giving Boston’s bullpen some much-needed rest.

“Winck threw the ball great today,” Barnes said. “I thought he commanded the strike zone incredibly well and was able to go deep into the game and put us in position to win a ballgame.”

Red Sox: INF-OF Kiké Hernández will continue his rehabilitation assignment at Double-A Portland on Friday, Cora said. Hernández has been on the injured list since early June with a strained right hip flexor. 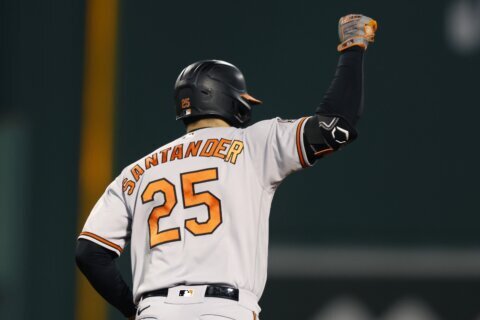 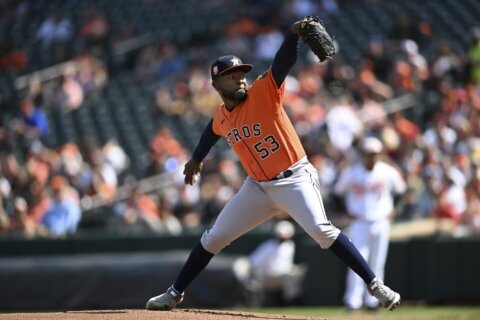