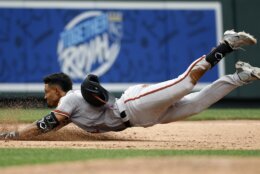 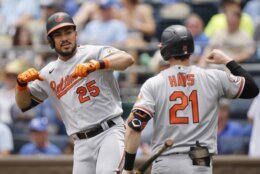 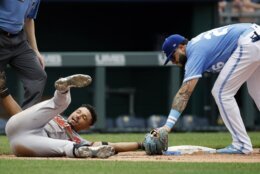 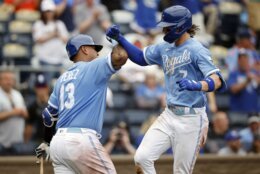 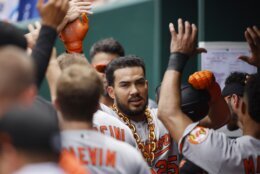 Hunter Dozier, Michael A. Taylor and Bobby Witt Jr. homered for the Royals.

Baltimore jumped on Brad Keller (1-8) with three homers in the first two innings.

Santander hit a 455-foot drive into the right-field fountains in the first.

“We swung the bat well all day,” Baltimore manager Brandon Hyde said. “We had really good at-bats and it started early, which is great to see, we haven’t done that a ton. Putting five runs up in the first couple of innings and hitting a few homers, that was nice.”

Cedric Mullins had four hits and drove in two runs for Baltimore. Richie Martin and Austin Hays each had three hits and two RBIs.

Dean Kremer (1-1) tossed five innings and allowed one earned run and four hits. He won his first game since his major league debut in September 2020, snapping an 0-9 stretch in 17 starts and claiming his first career win on the road.

“You can’t complain about getting some early run support,” Kremer said. “It is a lot more relaxing pitching with a good lead.”

Cionel Pérez notched his first career save with a scoreless ninth.

Keller gave up five runs on seven hits in 1 2/3 innings. The three home runs he allowed tied a career-high set in 2019 and it was his shortest outing of the season.

“I just felt like I didn’t have much command of anything out there,” Keller said. “It was tough and I felt like they all kept flying out of my hand and not going anywhere I wanted it to go. We had a good gameplan going in but didn’t execute the pitches.”

“Brad just didn’t have a feel for anything,” Matheny said. “When you can’t control the fastball it’s going to be a long one. He never got in a groove.”

Royals: LHP Amir Garrett was reinstated from the injured list. LHP Angel Zerpa was optioned to Double-A Northwest Arkansas in a corresponding move.