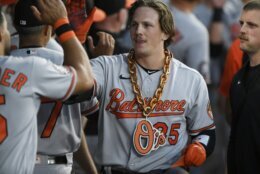 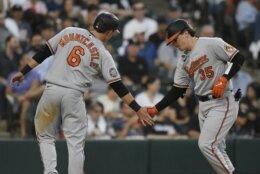 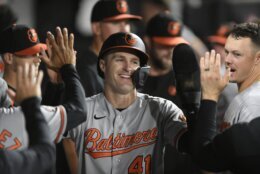 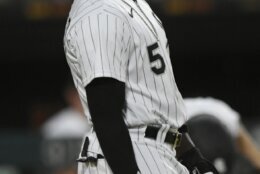 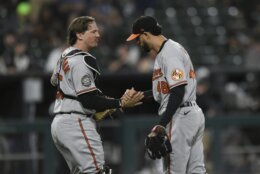 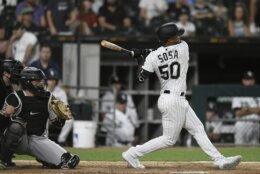 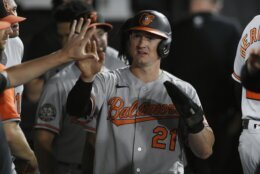 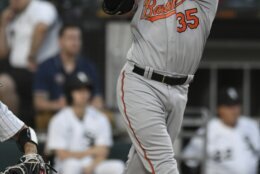 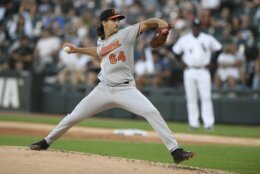 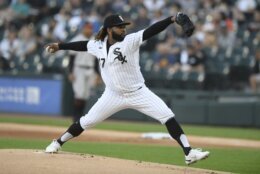 Ryan Mountcastle had two doubles among his three hits as the Orioles won their second in a row and third in four. Dean Kremer tossed 5 2/3 scoreless innings before three relievers finished off a nine-hit shutout backed by several nifty catches from Baltimore outfielders.

“He’s really talented and there’s always an adjustment period in the big leagues,” Baltimore manager Brandon Hyde said. “But he’s got big-time tools and a ton of ability and you saw the power tonight.”

Rutschman, the No. 1 overall pick in 2019 out of Oregon State, said he’s taking a “process-oriented” approach as hitter and behind the plate. Kremer has bolder predictions for his battery mate.

“I mean, he’s the type of talent that can change the dynamic of a clubhouse when he gets hot, which he definitely will pretty soon,” Kremer said. “He’s definitely a game-changer both behind the dish and at the plate as a hitter.”

Kremer (2-1) worked around seven hits and several well-struck drives that Baltimore outfielders caught at the wall. The right-hander struck out four and walked one in his second straight scoreless outing and fourth start since returning from a strained right oblique on June 5.

Kremer praised outfielders Anthony Santander, Cedric Mullins and especially Austin Hays in right for keeping Chicago off the board.

“I mean, every single guy out there, all three of them … went out and got it today,” Kremer said. “I was very impressed.”

Jorge Lopez entered with one out in the ninth and runners at first and second. The Orioles closer fanned Tim Anderson and Andrew Vaughn for his 12th save.

Johnny Cueto (1-4) allowed three runs and seven hits in 5 1/3 innings, striking out seven and walking one in the loss.

“I would say we should win the game when you get nine hits and lot of hard outs,” Chicago manager Tony La Russa said. “So we hit a lot of balls hard and couldn’t break through.”

The White Sox lost their second in a row — and their injury woes deepened.

Utilityman Danny Mendick will miss the rest of the season with a torn ACL in his right knee. Outfielder Adam Engel is headed to the 10-day injured list with a strained right hamstring.

Center fielder Luis Robert was held out the starting lineup to rest an unspecified injury. La Russa said he hoped Robert would be available Friday.

First baseman José Abreu had two hits, but was again relegated to designated hitter because of a hip issue.

Rutschman lined Cueto’s 2-2 cutter into the right-field bullpen for a 2-0 Baltimore lead — and the second homer of his career — in the fourth. Mountcastle was aboard after doubling to the wall in right-center.

Rutschman greeted reliever Reynaldo Lopez with a double down the right-field line in the sixth to drive in Hays and increase the Orioles’ lead to 3-0.

Mullins’ second hit of the game drove in a run in the ninth.

A day after becoming the sixth player in Orioles history (since 1954) to hit for the cycle, Austin Hays settled for a double and run scored in four at-bats.

Hays made a terrific nose-first diving catch on Jake Burger’s fly down the right-field line in the eighth to prevent an extra-base hit with a runner on.

To fill the roster spots of Mendick and Engel, the White Sox recalled INF/OF Gavin Sheets from Triple-A Charlotte and INF Lenyn Sosa from Double-A Birmingham

Sheets started in right field and batted sixth. He was thrown out by Hays trying to score in the fourth.

Sosa entered at second-base in the sixth for his major league debut. Josh Harrison, who started at second, left after being hit by a pitch in the shoulder in the fifth.

White Sox: Mendick needs surgery, although a date has not been scheduled, and expects to be ready for spring training in February. He batted .289 with three homers and 15 RBIs in 31 games. Mendick was playing shortstop when he collided with left fielder Adam Haseley on a foul popup in Wednesday’s 9-5 loss to Toronto. … Engel had a similar hamstring injury before and said that this one didn’t seem particularly severe. … Chicago transferred OF Eloy Jimenez to the 60-day injured list. Jimenez, out since April 24 with a right hamstring tendon tear, has been rehabbing at Charlotte.