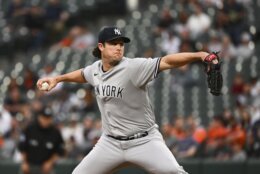 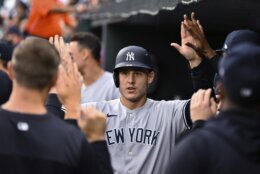 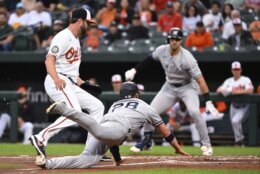 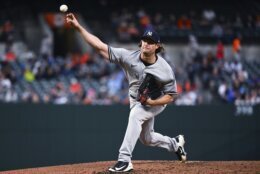 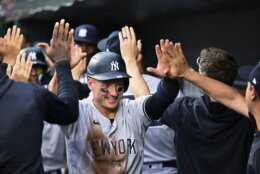 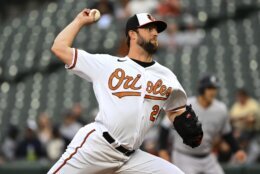 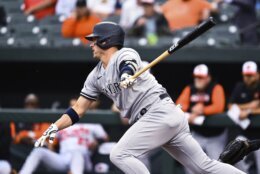 BALTIMORE (AP) — On a night when their bats were held in check, the New York Yankees found another way to win.

New York managed only six hits, but a three-run first inning that featured a sprint from second to home on a wild pitch proved enough to squeeze out a victory.

And that, to a large degree, explains why New York is off to an amazing 28-9 start.

“Tonight we won on baserunning and defense,” Cole noted, “and we’re the Bronx Bombers.”

No home runs required. The Yankees could muster only a pair of doubles, but they still secured their 21st win in 24 games.

“It’s been a great start, no question,” manager Aaron Boone said. “Just really pleased with how they’re doing it — in a lot of different ways. Tonight we leaned on the pitching and great baserunning.”

New York broke on top in the first when Gleyber Torres followed two-out singles by Rizzo and Donaldson with an RBI double. Then, on a wild pitch by Jordan Lyles, Donaldson scored and Torres came home on catcher Anthony Bemboom’s errant throw to the plate.

That was enough to propel the Yankees to their ninth win in the last 10 games. New York’s 28-9 start is tied for second-best in the majors since 1948, trailing only the 1984 Detroit Tigers at 32-5.

The Yankees will attempt to complete a four-game sweep of last-place Baltimore on Thursday afternoon. The Orioles, who have lost six straight, are the only team to take a series from the Yankees this season, winning two of three in mid-April.

After Cole’s impressive outing was done, Clay Holmes worked the final two innings for the third save of his career, all this season and all against the Orioles.

Baltimore closed to 3-2 sixth when Austin Hays hit an RBI double and scored on an infield grounder.

“We’re just a hit or two from breaking out a little bit,” Orioles manager Brandon Hyde said. “I thought we took really good at-bats off (Cole) the first time in the order, and like an ace does, he settled in and got better as the game went on.”

Boone filled out a starting lineup without stars Giancarlo Stanton and DJ LeMahieu, who were healthy but rested for a team in the midst of playing 23 games in 22 days.

Orioles: LHP John Means spoke to the media for the first time since undergoing Tommy John surgery late last month. Wearing a large brace on his left arm, the 2019 AL All-Star said, “Honestly, it’s going better than it’s supposed to be and my (arm) range is way ahead of schedule.” Means, who threw a no-hitter in Seattle last year, hopes to pitch again in 2023. … SS Jorge Mateo was back in the lineup for the first time since Sunday, when he bruised his shoulder and chest in a collision with Detroit’s Spencer Torkelson.

Annoyed that he lost a potential home run because the left-field wall at Camden Yards was moved back 26 1/2 feet since last year, New York’s Aaron Judge called the new dimensions “a travesty.” But Hyde, noting that routine fly balls used to be homers, countered Wednesday by saying, “It’s more fair than before.”

Baltimore acquired RHP Luis Osorio from the Arizona Diamondbacks for LHP Paul Fry, who was designated for assignment on Saturday.

Yankees: LHP Jordan Montgomery (0-1, 3.06 ERA) will start the series finale. He’s allowed two runs or fewer in each of his last six starts.

Orioles: LHP Bruce Zimmermann (2-2, 2.72) makes his eighth start of the season and second against the Yankees. In two career starts against New York, he’s got a 2.89 ERA over 9 1/3 innings.