Luis Severino allowed one hit in six innings, and Jose Trevino became the first New York catcher with a home run this year when he hit a three-run drive in the fourth to lift the surging Yankees over the Baltimore Orioles 6-2 Monday night.
Listen now to WTOP News WTOP.com | Alexa | Google Home | WTOP App | 103.5 FM
(1/8) 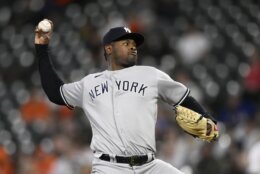 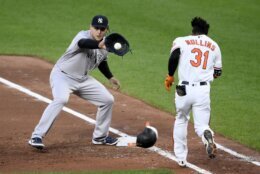 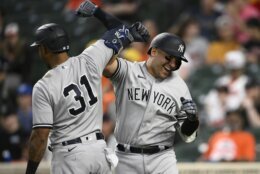 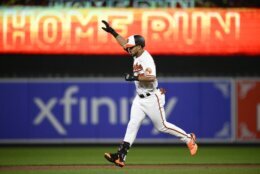 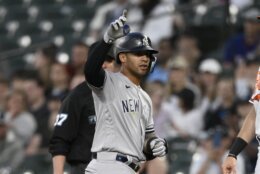 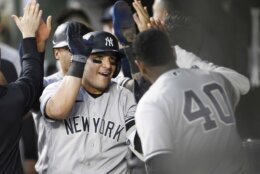 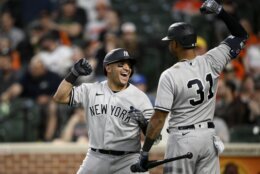 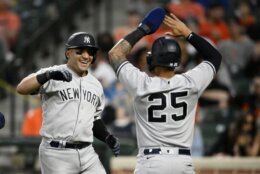 BALTIMORE (AP) — Jose Trevino gave the New York Yankees one of the few things they’ve been lacking lately — some power from the catcher position.

Trevino became the first New York catcher with a home run this year when he hit a three-run drive in the fourth to lift the surging Yankees over the Baltimore Orioles 6-2 Monday night.

The Yankees traded power-hitting catcher Gary Sánchez to Minnesota in the offseason, and both Trevino and Kyle Higashioka have improved the defense but are slugging under .300. Trevino had a couple hits Monday, though, including his big home run.

“That was awesome. It was a big spot for us right there,” teammate Josh Donaldson said. “He’s been having some good at-bats. Obviously, he does a great job behind the plate and he did that again today.”

Anthony Santander homered twice for Baltimore’s only runs, but the Orioles managed only one other hit in the game.

Kyle Bradish (1-2) allowed four runs and eight hits in 4 1/3 innings in his fourth career start. He walked three and struck out six.

“Maybe he was overamped early,” Orioles manager Brandon Hyde said. “I didn’t think his command was as good as it had been.”

The Yankees left the bases loaded in the first, then Baltimore squandered a chance to take the lead after Joey Gallo misplayed Cedric Mullins’ flyball in left field for a three-base error. After a walk to Trey Mancini, the Orioles had men on first and third with nobody out, but Mancini was doubled off first when second baseman Gleyber Torres made a diving catch on Santander’s soft liner.

“Play of the game early,” manager Aaron Boone said. “I just saw the ball getting blooped into what I thought was over Rizzo’s head into right field on the 18th pitch of the inning with no outs, and I’m going, ‘Oh, no.’ Out of nowhere, Gleyber comes in and turns it into a double play.”

New York took a 1-0 lead in the third on Giancarlo Stanton’s RBI double. With two on in the fourth, Trevino’s fly to right hit the pole.

Donaldson had three hits and a walk to extend his on-base streak to 22 games.

New York’s starting pitchers have allowed three runs or fewer in 33 of 35 starts this season.

Santander homered from the left side of the plate off Severino (3-0) in the fourth, then from the right side off Aroldis Chapman in the ninth.

Rizzo, Stanton and Aaron Judge — who had the night off — are the first trio of Yankees hitters to reach double digits in home runs by the team’s 35th game. New York hit back-to-back homers for the fourth time, all involving Rizzo.

The Yankees extended their advantage atop the AL East to 5 1/2 games over Tampa Bay. That matches the crosstown Mets for baseball’s largest division lead.

NOT A BIG FAN

Boone said the new wall in left field at Camden Yards — which is higher and farther back — takes away at least some of the ballpark’s charm. The previous wall put fans a little closer to the action.

“I don’t think it’s any secret or in my opinion that it’s one of the most beautiful parks in the league, and it still is,” Boone said. “To me, that makes it a little less.”

Jameson Taillon (3-1) takes the mound for New York on Tuesday night against Spenser Watkins (0-1) of the Orioles. Both pitchers will be on five days’ rest. 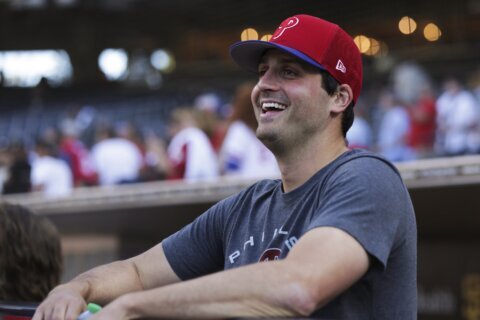 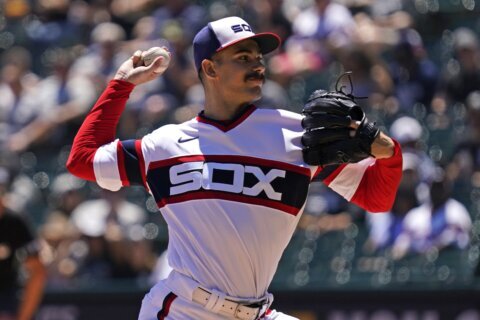