Cedric Mullins and Ramón Urías each hit a two-run homer during Baltimore's six-run third inning, and the Orioles went on to a 9-4 victory over the Minnesota Twins on Wednesday night.
Listen now to WTOP News WTOP.com | Alexa | Google Home | WTOP App | 103.5 FM
(1/4) 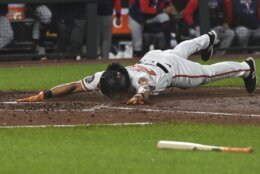 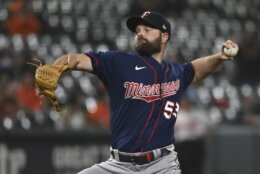 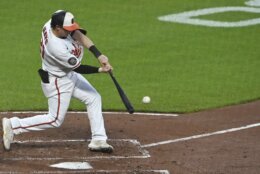 BALTIMORE (AP) — Trey Mancini reached base four times without hitting the ball out of the infield.

It was that kind of night for the Baltimore Orioles, who took advantage of several big breaks to slow down surging Minnesota.

Cedric Mullins and Ramón Urías each hit a two-run homer during Baltimore’s six-run third inning, and Mancini had three infield hits in a 9-4 victory over the Twins on Wednesday night.

“We’ve been talking a lot about some of the bad breaks we’ve gotten. Some things went our way tonight,” Mancini said. “Sometimes, that’s the name of the game.”

The first-place Twins lost for just the second time in 13 games. Dylan Bundy (3-2) allowed nine runs and 11 hits in 3 2/3 innings against his former team.

Kyle Bradish — traded to the Orioles by the Los Angeles Angels for Bundy in 2019 — gave up four runs and six hits in four innings, but the Baltimore bullpen was solid the rest of the way. Cionel Pérez (1-0) went two innings to earn the win.

On two of Mancini’s infield singles, he ended up on second because of throwing errors when Twins infielders rushed to try to get him at first.

“He kind of nubbed it in the right area for them to have to backhand and make a cross-body throw. I’m sure the speed intimidated,” Orioles manager Brandon Hyde deadpanned.

Mancini, who also drew a walk, has two stolen bases in his career.

While Minnesota was having a shoddy night defensively, Baltimore’s infield turned five double plays in the first seven innings — four on grounders up the middle, and one on a shallow fly.

Mullins homered to give the Orioles a 2-0 lead, and after consecutive walks, Austin Hays hit an RBI single. With two outs, Rougned Odor hit a hard line drive at rookie Jose Miranda, the first baseman. The ball went off Miranda’s glove for an RBI single that made it 4-0. Urías followed with his home run.

The Twins struck back quickly with four runs in the fourth. Correa hit a two-run homer, and Nick Gordon added an RBI single.

With the score 6-3, the Twins still had the bases loaded with one out when Gio Urshela hit a sacrifice fly. Gary Sánchez, the runner on first, looked as though he had to dodge the throw coming in from right field. Had the ball bounced off him accidentally, another run might have scored.

The next batter, Gilberto Celestino, hit a sharp liner toward right that appeared certain to be a run-scoring single. But that ball did hit Sánchez between first and second for the third out.

The Orioles then scored three more runs in the bottom of the inning. Mullins hit a single, and on Mancini’s infield hit, Miranda threw the ball away, leaving runners on second and third. Anthony Santander followed with an RBI single and Hays hit a sacrifice fly. Ryan Mountcastle then doubled home a run, finally chasing Bundy.

“He threw a ton of strikes early in this game,” Twins manager Rocco Baldelli said. “That’s normally a pretty good thing, but it could also be part of it. Guys at the plate maybe get a little bit into swing mode, because everything is right there and in the zone. But truthfully, we should have played better behind him as well.”

The Orioles warmed up wearing Washington Capitals shirts. The Capitals opened their first-round NHL playoff series with a win at Florida on Tuesday night.

Twins: OF Max Kepler (stomach bug) did not play.

Minnesota sends Chris Archer (0-0) to the mound Thursday night against Spenser Watkins (0-0) in the series finale. 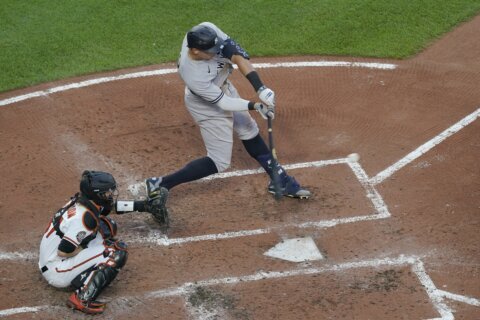 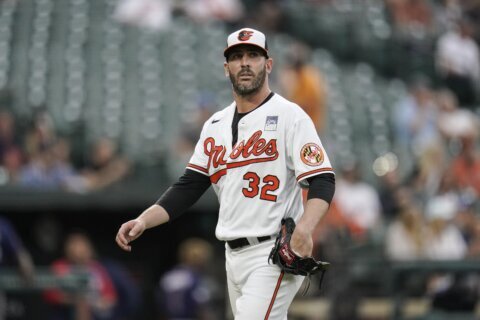