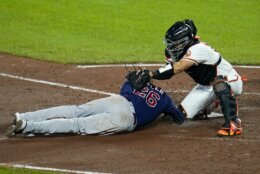 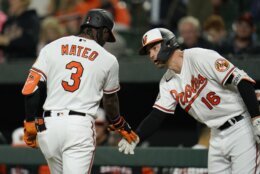 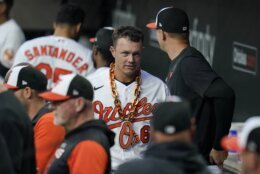 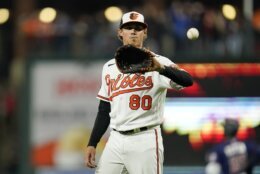 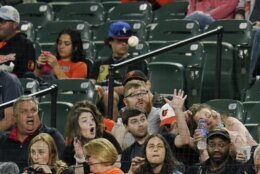 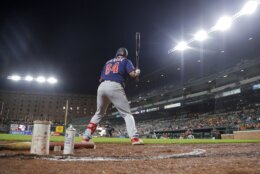 BALTIMORE (AP) — Austin Hays hit a tiebreaking home run in the eighth inning that sailed over the big new wall in left field at Camden Yards — an impressive swing under any circumstances.

It wasn’t even his favorite play of the night.

That honor was reserved for Hays’ fourth-inning throw from down the line in left that arrived at home just in time to catch Max Kepler trying to score. Thanks largely to Hays’ bat and his arm, the Baltimore Orioles beat the Minnesota Twins 5-3 on Thursday night.

Hays made it clear afterward which highlight meant more to him.

“Definitely the throw,” he said. “You hit more home runs than you get assists in the outfield.”

Ryan Mountcastle homered twice for the Orioles, including a drive immediately after Hays hit his homer with one out in the eighth off Jhoan Duran (0-1). Cedric Mullins and Jorge Mateo went deep as well for Baltimore.

Byron Buxton hit a home run for Minnesota, which was without manager Rocco Baldelli, second baseman Luis Arraez and pitcher Dylan Bundy because they tested positive for COVID-19 before the game. Twins star Carlos Correa also left after he appeared to be hit on the hand by a pitch — the team said he might have a broken finger and will have another test Friday.

Jorge López (3-1) got the final four outs for Baltimore to earn the win.

Mountcastle put the Orioles up 1-0 in the second, and the drive by Mullins made it 2-1 in the third. Buxton hit a two-run shot in the fifth, but Mateo tied it in the bottom half.

In the fourth, Hays uncorked a throw all the way to the plate from deep down the line in left, cutting down Kepler at home on Gary Sánchez’s double.

The Twins had another runner thrown out at the plate on an odd play in the third. With the bases loaded and nobody out, Buxton hit a grounder to third, and the Orioles tried to turn a double play up the middle. One run scored easily on the play, and when second baseman Rougned Odor’s throw got past first, rookie Jose Miranda tried to come home too.

Miranda was initially called safe on a close play after the throw by first baseman Mountcastle, but he was ruled out after a replay review.

The wall at Camden Yards is higher and further back than it was last season, but that didn’t matter much on a night when the Orioles hit five home runs and Buxton’s shot for the Twins went 452 feet, according to Statcast.

Mountcastle’s homers went to center and right-center, two parts of the park that are unchanged.

“Some of these guys are at their best when they’re using the big part of the field and staying into right-center anyways,” Orioles manager Brandon Hyde said.

Catcher Adley Rutschman, baseball’s No. 2 prospect according to MLB Pipeline, was assigned to Triple-A Norfolk from Double-A Bowie. Rutschman reached Triple-A last year but had a triceps injury before this season.

Twins: Correa was hit by a pitch in the fifth. The ball appeared to deflect off his wrist or forearm and catch him around the right shoulder. He stayed in the game. But next time up, a pitch appeared hit at least one of his hands while they were on the handle of the bat and he was in the middle of a half-swing. The ball went into fair territory and Correa was easily retired. … Bench coach Jayce Tingler managed in Baldelli’s place.

Orioles: Hyde said OF Tyler Nevin (groin) was probably available off the bench, but he didn’t play.