A look at what’s happening around the majors today: ___ ALL OVER AGAIN The Chicago White Sox likely will have…
Listen now to WTOP News WTOP.com | Alexa | Google Home | WTOP App | 103.5 FM

The Chicago White Sox likely will have an update on Eloy Jiménez after the slugging outfielder hurt his right hamstring during Saturday’s 9-2 loss at Minnesota. But he is expected to be out for a while after he also missed much of last year with a ruptured left pectoral tendon.

This time, Jiménez was injured when he stretched for first base while running out a grounder to third. He stumbled after the play and his right knee appeared to lock up. Jiménez fell face-first to the ground in shallow right field and immediately grabbed at his right leg.

Jiménez was sent for an MRI, but manager Tony La Russa said the team doesn’t feel the injury is season-ending. The hope is the recovery won’t be as long as it took him to come back last season.

Gerrit Cole and the New York Yankees go for a three-game sweep of Cleveland — one day after some fans in the notoriously rowdy right-field bleachers at Yankee Stadium pelted Guardians outfielders with bottles, cans and debris in a chaotic scene moments after New York rallied for a 5-4 win.

Yankees stars Aaron Judge, Giancarlo Stanton and other New York players rushed toward the wall in right-center field, trying to calm the crowd. Security personnel joined the effort to quell the disturbance.

Cole (0-0, 6.35 ERA) pitched a career-low 1 2/3 innings last time out in Detroit. He matched his career high of five walks and allowed two runs and one hit, throwing just 37 of 68 pitches for strikes.

The Cincinnati Reds have lost 11 straight for the first time since 2016, and next up is St. Louis right-hander Adam Wainwright (2-1, 2.81 ERA) in the finale of their weekend series against the visiting Cardinals. Wainwright is 10-15 with a 5.29 ERA in 36 career appearances against the Reds. It’s his only losing record versus a major league team he has more than one decision against.

After splitting its opening four-game series at Atlanta, Cincinnati has been swept by the Guardians, Dodgers and Padres and has lost the first two games of the series with St. Louis. Nick Lodolo (0-2, 8.00 ERA) tries for his first big league win.

A WIN OUT WEST

San Diego won 3-2 in 10 innings Saturday night to snap a 10-game losing streak to the rival Dodgers, who had outscored the Padres 57-23 during a streak that dated to Aug. 24.

“Last year was last year and this year’s this year, so we’re 1-1 against them. Not bad,” said Padres infielder Jake Cronenworth, who ended an 0-for-23 slump and later homered.

Bryce Harper and the Phillies host Milwaukee at night in the finale of a three-game series. Philadelphia sends Aaron Nola (1-2, 5.52 ERA) to the mound against Brewers lefty Eric Lauer (1-3, 3.48). Milwaukee’s pitching staff has a 2.32 ERA and 66 strikeouts in 62 innings over the past seven games. Harper, last year’s NL MVP, is batting .345 with six RBIs during a seven-game hitting streak.

One day after Detroit slugger Miguel Cabrera surpassed 3,000 career hits, the Tigers hope to have star shortstop Javier Báez back from a sore right thumb. Báez took batting practice Saturday and could be activated from the 10-day injured list against Colorado.

“After multiple MRI’s it’s confirmed that I need Tommy John surgery,” he posted on Twitter. “I’m obviously disappointed, but more motivated than ever. In the meantime, I’m looking forward to watching what this team can do this year.”

Last May, Means pitched a no-hitter against Seattle. He finished 6-9 with a 3.62 ERA last season, leading a staff that had the worst ERA in the majors. 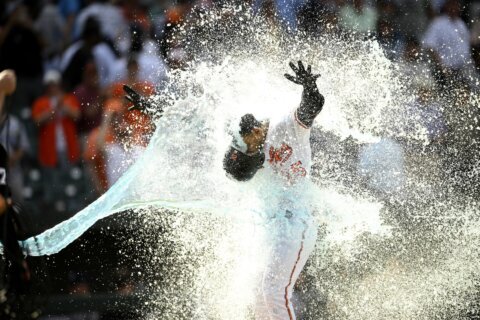