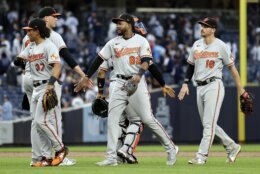 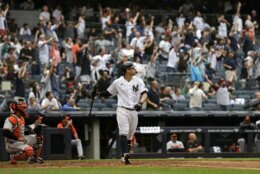 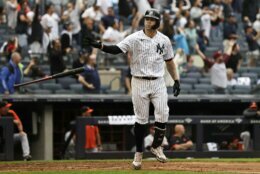 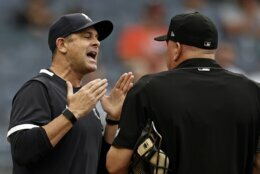 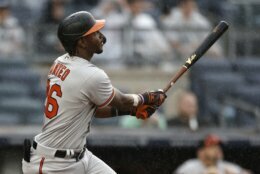 NEW YORK (AP) — Gary Sánchez hit a grand slam and a two-run homer, but the New York Yankees blew a late lead and lost to the last-place Baltimore Orioles 8-7 Sunday.

The wild card-contending Yankees dropped to 9-7 against the Orioles this year. Baltimore is 1-18 against AL East-leading Tampa Bay.

New York wasted leads of 4-1, 5-2 and 7-4 and lost for the sixth time in eight games following its first 13-game winning streak since 1961. The Yankees remained a half-game ahead of Boston for the first wild-card spot heading into a four-game series with the Toronto Blue Jays.

“Incredibly frustrating,” said Yankees manager Aaron Boone, who was ejected in the fifth. “We didn’t put our best foot forward the last couple of days and now we’ve got obviously a very good, hot team coming into play us and we’ve got to do better.”

“We get to write the story still and we’ve responded from tough days, tough moments, tough stretches and we have to do it again,” he said.

Sánchez hit a slam in the second inning, and his homer in the sixth off Marcos Diplan (1-0) gave the Yankees a 7-4 lead and earned the catcher a brief curtain call. But the reception from the crowd changed when Andrew Heaney (8-9) allowed four runs in the seventh.

Jorge Mateo hit a single to cap a 12-pitch at-bat for a 7-all tie and Kelvin Gutierrez followed with a go-ahead single.

After getting the lead, the Orioles hung on for their fifth win in 30 games since Aug. 2 when a cat raced on the field in the eighth inning at Yankee Stadium.

Diplan kept the game at 7-4 after Sánchez homered and exited after walking Giancarlo Stanton with one out in the seventh. Tanner Scott stranded two in the seventh and fanned Joey Gallo to end the eighth.

Tyler Wells needed 12 pitches to retire Aaron Judge, Giancarlo Stanton and Anthony Rizzo in a 1-2-3 ninth for his first career save.

The Orioles also won for the fifth time in 11 games following their 19-game skid.

“It’s definitely up there,” Mullins said. “Any team win is big. We had moments (where) we fell behind where our offense stuck with it and continued to chip away.”

Rizzo hit an RBI single for the Yankees, who have four one-run losses to the Orioles this year.

Corey Kluber allowed two runs and four hits in 3 2/3 innings in his second start since missing three months with a strained right shoulder. He struck out five, walked three and threw 78 pitches before the Yankees attempted to piece together the final 16 outs.

Sánchez gave the Yankees a 4-1 lead by capping a nine-pitch at-bat against Keegan Akin.

Sánchez fouled off four straight pitches, took a close pitch to reach a full count and then hit a fastball about halfway up in the second deck in left. The 430-foot blast was his third grand slam and came in his second career start as a ninth-place hitter.

“I just really wanted to attack pitches in the strike zone,” Sánchez said through a translator after becoming the fourth Yankee to get at least six RBIs as a ninth-place hitter since 1920.

New York took a 5-2 lead in the fifth on Rizzo’s single. Mullins’ 25th homer made it a one-run game before Sánchez went deep again.

Boone was ejected after making a pitching change in the fifth. He was upset at ball four to DJ Stewart that replays showed at the top of the strike zone. A YES Network mic picked him up saying: “That’s not even close.”

After lifting Joely Rodríguez for Albert Abreu, Boone walked over to plate umpire Jeff Nelson, gestured a few times and was tossed for the sixth time this year.

Before Mullins homered, Torres was slow to get a routine groundball and it resulted in an infield single for Gutierrez off Abreu

“We got to make that play,” said Boone, who reviewed it and thought Torres moved his feet properly.

Torres, who has had defensive issues at times at shortstop, said he hesitated in trying to avoid making a bad throw to first base and that he normally makes the play.

“I feel if I make that play Abreu finishes that inning clean,” Torres said. “After my mistake Mullins hit a homer. I feel as if everything is on me that inning.”

Orioles: OF Ryan Mountcastle (right foot) was held out of the lineup after fouling a ball off his foot Saturday. …. IF Ramón Urías exited with soreness in his upper right leg and is day-to-day.

Yankees: 3B Gio Urshela (left hand) did not start a fourth straight game and is expected to play Monday. He batted as a pinch-hitter in the eighth.