KANSAS CITY, Mo. (AP) — In retrospect, the Chicago White Sox probably should have walked Salvador Perez with first base open in the first inning of a scoreless game Sunday, even if it would have gone against just about every traditional baseball strategy.

Instead of loading the bags, though, they watched the Royals’ sweet-swinging catcher empty them.

On the second pitch he saw from Dylan Cease, a 99 mph fastball well off the plate, Perez made the kind of contact that sounds as if a rocket has exploded. The ball soared into the early afternoon sun, splashing down after what seemed like an eternity in the upper fountains in right field — an opposite-field blast estimated at 448 feet.

“Most of us couldn’t stand in right field with a fungo and hit it up there,” Royals manager Mike Matheny said with a shake of his head. “When it came off the bat, it just looked different. I don’t know what to say.”

Hard to find words to put in perspective the season Perez is having.

Even with the Royals again well out of contention — 17 games back of the AL Central-leading White Sox entering Tuesday night’s game in Baltimore — their 31-year-old catcher is turning their stretch run into must-see viewing.

That homer against the White Sox on Sunday was his 41st, second only to Angels star Shohei Ohtani for the big league lead, and four back of Johnny Bench’s record set in 1970 for a player who caught at least 75% of his team’s games.

He is seven behind Jorge Soler’s franchise record set just a couple of years ago.

Even when Perez doesn’t manage a home run, he’s still coming through in the clutch. His tying RBI single in the eighth inning Monday, which helped the Royals to a 3-2 win over the Orioles, was his career-best 103rd of the season. It was the 34th RBI this season that tied the game or gave Kansas City the lead, tied with Seattle’s Kyle Seager for the major league lead, and his total tied Jose Abreu of the White Sox for the best in the majors.

“It’s just a huge number,” said Matheny, who caught for 13 seasons but hit just 67 homers in his career. “To be able to do that while taking such a beating behind the plate, and the kind of player he’s been all season long, offensively and defensively — we’re witnessing something very special.”

Even more special when you consider the road Perez has taken to get here.

He had long ago made his mark as one of baseball’s best catchers, making six consecutive appearances in the All-Star Game and failing to add a Gold Glove to his mantel just once over that stretch. He had four straight seasons of at least 20 homers and back-to-back seasons of 80 RBIs in 2017 and ’18, numbers that are almost unheard of for a catcher.

Then the unthinkable happened: Perez was diagnosed with torn ligaments in his throwing elbow in spring training the next year, causing him to miss an entire season. It’s an injury that is common among pitchers — the repair known as Tommy John surgery — but rarely happens to position players and almost never to a catcher.

Perez was ready to go for the pandemic-shortened 2020 season, hitting a career-best .333 with 11 home runs and 32 RBIs, to win his third Silver Slugger Award, and perhaps that should have foreshadowed this season.

Or if not that 37-game sprint, then the work he put in during the offseason.

Always fastidious about his craft, Perez put an emphasis on getting in better shape last offseason. He improved his diet, did more stretching and flexibility work, and made sure he would be able to handle the rigors of another full season.

“This means a lot,” Perez said over the weekend, “because I know the hard work I put in last offseason, from October to the day before I flew to Arizona for spring training. If you work hard, good things are going to happen. Be consistent. I did my best in the offseason, took care of my body and put myself in the right position to play the game.”

Not only has Perez appeared in 136 of 137 games this season, 108 of them have been behind the plate, where the heat and the gear and the long days and nights of squatting take an incredible physical toll on a player.

But that’s also where Perez is most valuable. The Royals have one of the youngest rotations in baseball, and any success they have in the future will depend heavily on how pitchers such as Brady Singer and Daniel Lynch continue to develop.

Having a seven-time All-Star putting down the signals for them makes everything that much easier.

“Nothing he does surprises me at this point,” Lynch said. “I think we all know how much we need him, and he probably felt that way, too, and I think he’s obviously tough. He gets beaten up back there every game it feels like. Every game it’s something, and you still seem back there every night, and then you see him do it at the plate. It’s pretty amazing, the way he just goes out there and does it for us every night.”

Many players regress after signing a new contract, but that’s another reason Perez is special. He signed an $82 million, four-year deal with a $13.5 million club option this past spring, which not only keeps him from hitting free agency after this monster season but also keep him in Kansas City through at least 2025.

By that point, the Royals hope all those young arms give fans a reason to tune in for some September baseball.

And not just to watch Perez hit, either.

“I’m just going to do my best every day,” Perez said, “and whatever happens, happens. Play until the last out of the season and see where I’m going to be. If there’s a pitch around the plate, I’m going to try to hit a homer and see what happens.” 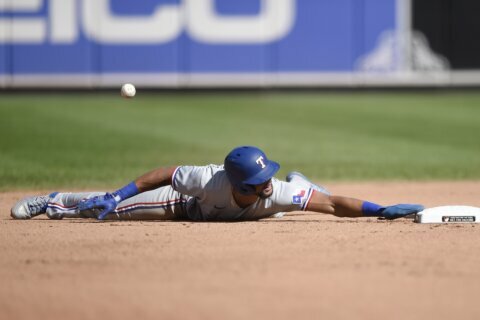 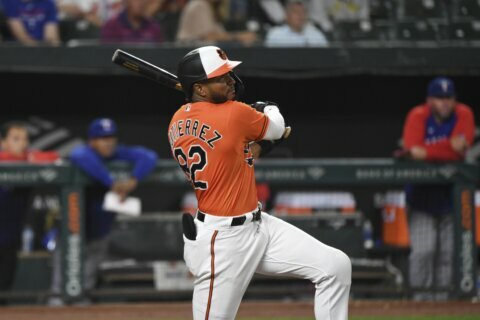