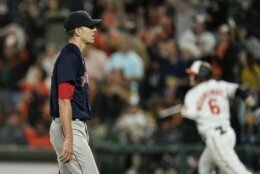 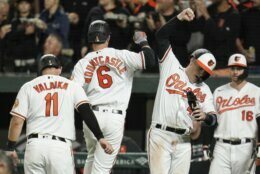 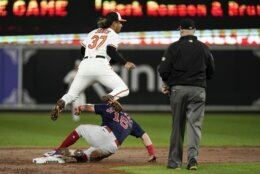 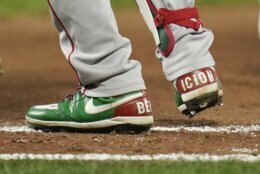 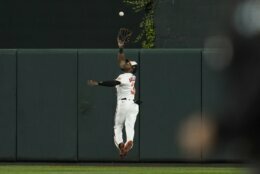 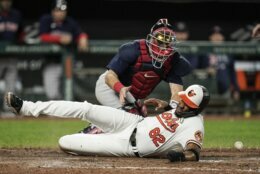 The last-place Orioles dealt the Boston Red Sox another blow in their postseason push, with Ryan Mountcastle hitting a three-run homer in the third inning of Baltimore’s 6-2 win Thursday night.

Baltimore has lost 107 games this year but took two of three in this series against Boston — welcome news for the Mariners, Blue Jays and Yankees. The Red Sox fell into a tie with Seattle for the American League’s second wild card. Boston trails New York by two games for the first wild card and leads Toronto by one.

Kiké Hernandez homered on the first pitch of the game for the Red Sox, but not much went right for them after that. Mountcastle put Baltimore up 3-1 with his 33rd home run of the season, and the Orioles added three more runs in the sixth.

Boston’s Nick Pivetta (9-8) struck out the side in the first, but he ultimately allowed three runs and four hits in 4 2/3 innings. He struck out eight with two walks.

Alexander Wells (2-3) allowed a run and three hits in six innings after entering the game with a 7.61 ERA.

This wasn’t as bad as 2011, when the Red Sox allowed two runs in the ninth inning at Baltimore and were eliminated on the final night of the regular season. That collapse ended manager Terry Francona’s tenure in Boston.

A decade later, the Orioles were a thorn in Boston’s side again, but the Red Sox still have time to recover when they finish the regular season with a series at Washington.

Boston pitchers threw four wild pitches in this game. Two of them came in the sixth, when the Red Sox also made an error. Tyler Nevin gave the Orioles a 5-1 lead with a two-run single, and Pat Valaika followed with a sacrifice fly.

“It was great to be able to come through in that moment,” said Nevin, who was playing his third major league game. “It’s just fun when the games really matter this much to somebody. We’re out of it, but we can still have an effect on how the season goes.”

Nevin is the son of former major leaguer Phil Nevin, who is the Yankees third base coach.

“We kind of joked about it,” he said. “I told him I got called up again, and he said, ‘Alright hey, why don’t you try to help us out a little bit?’”

The Red Sox have lost five of six against the Yankees and Orioles, scoring only 19 runs in the process.

“I have three more games to get going and try to help this team turn this around,” said Xander Bogaerts, who went 0 for 3 on Thursday and is 2 for 23 over the past six games. “It’s not a good time to be playing bad baseball, but sometimes it happens.”

Baltimore finished the season with a 27-54 record at Camden Yards, the worst home record in baseball. The Orioles drew fewer than 800,000 fans this season, which was impacted by the coronavirus pandemic.

Red Sox: Boston is in an odd spot at second base. Christian Arroyo was reinstated from the COVID-19 injured list over a week ago, but José Iglesias has hit .339 in 20 games for Boston and continues to play. The Red Sox signed Iglesias in early September, so he can’t play for them in the postseason if they make it. Cora said Arroyo, who has played only twice since his return, is doing what he can to stay sharp. “Hopefully we have to make that decision, let’s put it that way, right? Who’s going to play second in the playoffs?” Cora said.

Red Sox: Eduardo Rodriguez (11-8) starts Friday night in the opener of the series at Washington. Josh Rogers (2-1) takes the mound for the Nationals.

Orioles: Baltimore finishes against another playoff contender at Toronto. The Orioles hadn’t announced a starter yet for Friday night’s game against Steven Matz (13-7) of the Blue Jays.