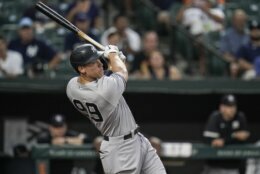 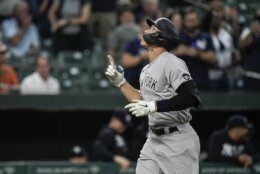 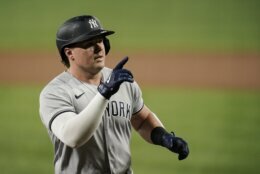 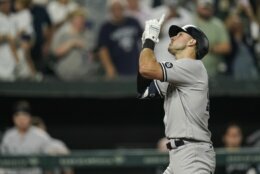 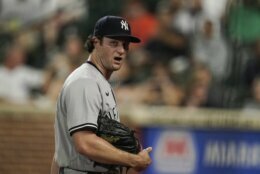 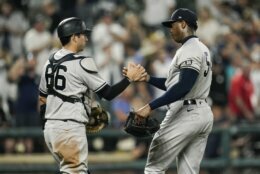 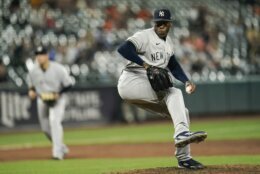 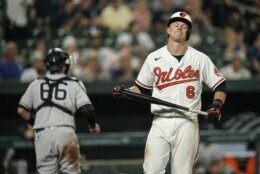 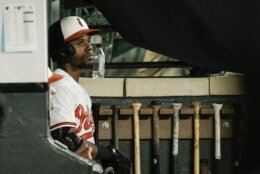 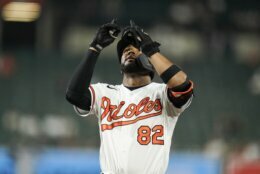 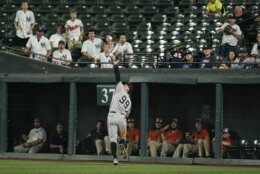 “Every win is big, obviously,” Yankees manager Aaron Boone said. “This is the fun time of the year. This is where you want to be, chasing October baseball. It’s good to get this first one here, especially after they took two out of three from us at our place.”

Cole (15-7), the AL leader in wins. returned from left hamstring tightness that cut short his Sept. 7 start against Toronto. He stranded the bases loaded in a 29-pitch first inning when he struck out Ramón Uris.

Cole allowed one run and four hits in five innings with seven strikeouts and three walks. He threw 108 pitches.

“It felt pretty good,” Cole said of the hamstring. “It was a little tough to move around with the wrap on there, but the leg responded very well.”

Judge and Gallo became just the fourth pair of teammates to hit their 34th home runs in the same game, joining Boston’s Ted Williams and Vern Stephens in 1949, Arizona’s Jay Bell and Matt Williams in 1999 and Colorado’s Carlos González and Nolan Arenado in 2015.

Judge homered hit a two-run homer in the first off a changeup from Alexander Wells (1-3). Judge is 20 for 58 with three doubles, nine homers and 15 RBIs against Baltimore this year.

Stanton hit a two-run homer in the third and Voit followed for back-to-back homers and a 5-0 lead.

“Jumping up top early is always good,” Stanton said. “A little relief even though you have to keep your foot on the gas the whole game. It’s much better playing with a lead than trying to catch up.”

New York won for the third time in 11 games and tied Toronto for the AL-wild card lead with 17 games left. Boston is percentage points back after beating Seattle 8-4.

The Yankees are 2-0 at the start of a stretch of 10 games against teams with losing records.

In his second game since being moved from shortstop to second base, Gleyber Torres allowed Urias’ potential double-play grounder in the sixth to bounce off a glove for an error, his 19th this season and fifth since Sept. 5. Torres followed by making a tough pickup on Pedro Severino’s grounder, stepping on second and throwing to first for a double play.

“It was good to see him bounce back from a tailor-made double-play ball there,” Boone said. “The next play he makes a really good play on a bullet.”

Torres was removed for a defensive replacement in the eighth.

New York grounded into three double plays and has hit into 137, second to Washington’s 140.

“One through nine, they’re a quality lineup,” Wells said. “You’ve got to be on your game from pitch one and tonight I made a couple mistakes out over the plate and they capitalized.”

Ryan Mountcastle had an RBI double in the fifth for the Orioles, who at a major league-worst 46-98 are headed to 100 losses for the third straight full season.

Orioles: RHP Marcos Diplán was recalled from Triple-A Norfolk and INF Pat Valaika had his contract selected from the Tides.

Yankees RHP Sal Romano injured a finger on his pitching hand trying to grab a comebacker by Kevin Gutierrez in the ninth. Romano was put back on the roster before the game when RHP Brooks Kriske was designated for assignment. Aroldis Chapman came in to finish. … RHP Domingo Germán threw two scoreless innings with two hits and four strikeouts for Triple-A Scranton/Wilkes-Barre and could be with the Yankees late this week. He hadn’t pitched since July 31 due to right shoulder inflammation.,

Orioles: LHP Tanner Scott (left knee sprain) was placed on the 10-day IL. He had a 2.78 ERA and 1.374 WHIP in the first half and a 9.82 ERA and 1.964 WHIP after the All-Star break. … INF Jorge Mateo (right lumbar inflammation)was placed on the 60-day injured list, ending his season. “Very disappointing because this guy was getting a chance to play in the big leagues … and playing well,” manager Brandon Hyde said. … DH Trey Mancini left in the fourth with abdominal soreness. “We’re hoping it’s not very serious,” Hyde said.

Orioles: LHP John Means (5-7, 3.42 ERA) has allowed nine runs over his last 24.1 innings, but he has two losses and two no-decisions in those four starts.