Bryce Harper threw out the tying run at the plate in the eighth inning and Andrew McCutchen hit a two-run home run to keep the Philadelphia Phillies pushing in the NL East race with a 4-3 win over the Baltimore Orioles on Wednesday night.
Listen now to WTOP News WTOP.com | Alexa | Google Home | WTOP App | 103.5 FM
(1/6) 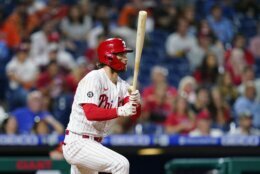 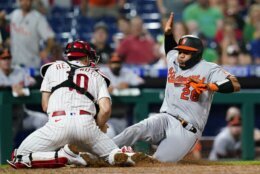 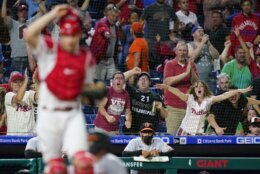 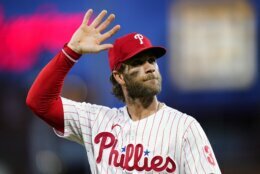 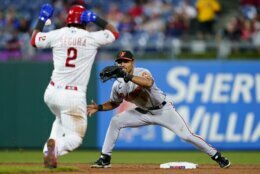 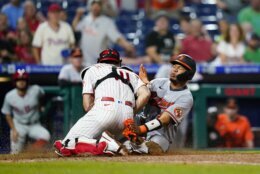 PHILADELPHIA (AP) — Bryce Harper won games for the Phillies this year with one swing, one slide, one daring dash around the bases.

Now add this save to the highlight reel: Harper fired a heater on the fly from right field that nailed a runner at home — and gave the Phillies one win to remember in a September stuffed with big games from their MVP contender.

Harper threw out the tying run at the plate in the eighth inning and Andrew McCutchen hit a two-run homer to keep Philadelphia pushing in the NL East race with a 4-3 win over the Baltimore Orioles on Wednesday night.

“We win by one run and he throws a guy out. That’s a big run,” manager Joe Girardi said.

The Phillies took two of three against the 104-loss Orioles and now finish the seven-game homestand with four against the 94-loss Pirates.

Philadelphia entered three games behind Atlanta for first in the division.

The Braves played Arizona on Wednesday night and finish a four-game series with the Diamondbacks on Thursday. The NL East could be decided when the Phillies play at Atlanta next week in a three-game set.

The Phillies can thank Harper’s arm for saving the win.

The Orioles trimmed the lead to 4-3 with two outs in the eighth and had a runner on second when Pat Valaika singled to right field. Pedro Severino was waved home and Harper fired a strike in the air to catcher J.T. Realmuto to end the inning.

Harper jogged off the field to his increasing chants from Phillies fans of “MVP!”

Jose Alvarado (7-1) got the win. Ian Kennedy walked two in the ninth before he retired Ryan Mountcastle for his 25th save.

Yes, the Phillies won the series, but the offense was punchless in large stretches against a staff that entered with the worst ERA (5.87) in baseball. John Means pitched like an All-Star in a 2-0 win Monday and the Orioles had the first road shutout thrown by a 100-loss team since 2016. The Phillies had to score two runs in the 10th inning to win 3-2 on Tuesday.

Orioles manager Brandon Hyde gave his team credit for playing a postseason “toe-to-toe” over three games considering “how beat up” they’ve been of late.

“They’re a big team with a big payroll and we’re kind of limping,” he said.

Jean Segura hit the tiebreaking sacrifice fly in the seventh off Conner Greene (1-2) and Realmuto, who won Tuesday’s game with a two-run triple in the 10th, followed with an RBI single for a 4-2 lead.

McCutchen delivered in the clutch in the sixth with a two-run, two-out shot off Eric Hanhold for his 25th of the year and a 2-1 lead. Keegan Akin retired nine straight until he allowed Harper’s single in the sixth. That was it for the 10-loss lefty.

Zack Wheeler, a 14-game winner, won his last four starts and allowed Austin Hays’ RBI double in the sixth that made it 1-0. Wheeler was lifted after the NL strikeout leader added nine to his total (240) over six innings.

He was lifted after 97 pitches as the Phillies try and keep their ace fresh over the final weeks of the playoff run.

“I want to keep pitching the rest of the season and hopefully in the playoffs,” he said. “I think we’re helping the cause by doing what we’re doing.”

Trey Mancini’s RBI groundout off Sam Coonrod tied it 2-all in the seventh.

Harper, one of the top NL MVP contenders, walked twice. It’s about the only way the Orioles could slow down the MLB leader in OPS (1.050) with a career-high 39 doubles and 33 home runs.

Who knew his biggest play at the plate instead would come from right field?

The Athletic cited sources that Hyde had his contract extended last offseason and will return in 2022.

“I can’t comment on my contract status but I am very excited to come back,” he said.

Hays was on third in the sixth when he was drilled by a foul ball hit by Severino. Hays grabbed the ball and tossed it into the dugout.

The Orioles designated RHP César Valdez for assignment for the second time this season. He had eight saves for the Orioles.