Andrew Benintendi hit a go-ahead single in the eighth inning, then reached above the left field wall to take away a potential tying home run in the ninth, sending the Kansas City Royals over the Baltimore Orioles 3-2 Monday.
Listen now to WTOP News WTOP.com | Alexa | Google Home | WTOP App | 103.5 FM
(1/7) 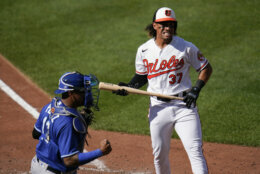 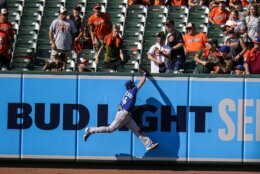 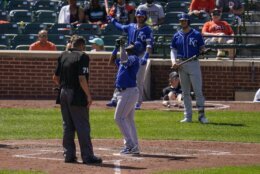 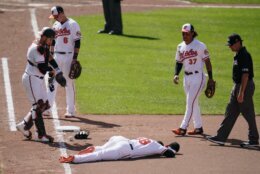 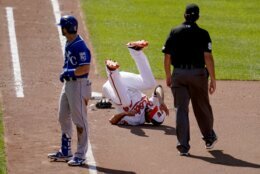 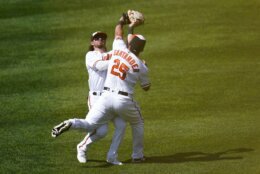 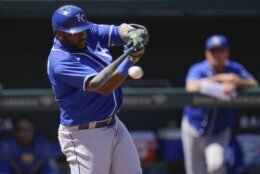 BALTIMORE (AP) — Andrew Benintendi hit a go-ahead single in the eighth inning, then reached above the left-field wall to take away a potential tying home run in the ninth, sending the Kansas City Royals over the Baltimore Orioles 3-2 Monday.

Anthony Santander led off the Orioles ninth with a fly that Benintendi caught, plucking the ball just above the fence.

“He hit it pretty high so it gave me a lot of time to get back there and kind of gauge it,” Benintendi said. “The wind started pushing it to right-center. So I just adjusted and tried to time it up. I’m glad I came down with it.”

Benintendi jogged several steps on the warning track with his head down and his glove against his chest before flipping the ball to center fielder Michael A. Taylor.

“He has to start showing us sooner that he has it in his glove,” Royals manager Mike Matheny said. “I know that delay is great for the opposition and the fans, but for me, I like to know what I thought I saw. Great play.”

Hanser Alberto homered against his former team to help the Royals win in their first visit to Camden Yards since August 2019.

Salvador Perez tied it at 2 with a bloop single in the eighth for the Royals. Benintendi provided the lead with an RBI hit off Cole Sulser (4-4).

Scott Barlow gave up a two-out single to pinch-hitter DJ Stewart in the ninth before striking out Jahmai Jones to earn his 11th save.

Cedric Mullins homered for the second consecutive day and has a team-high 26 for the Orioles, who fell to 1-79 when trailing after eight innings.

Jorge Lopez relieved in the seventh for Baltimore and had to leave the game after facing just one batter when he injured his right ankle trying to cover first base on a soft grounder. He was awaiting further testing to assess the extent of the injury.

The Orioles took a 1-0 lead in the first on an RBI single by Austin Hays off Royals starter ​​Kris Bubic, the team’s first-round pick in 2018 out of Stanford University. Hays extended his hitting streak to a career-high 13 games and he has nine RBIs over that stretch.

“I think my luck has increased a little bit,” Hays said. “I’m getting some balls to fall.”

Alberto, who played for Baltimore the past two seasons, made it 1-all in the fifth with a towering home run into the Kansas City bullpen off Zac Lowther. Recalled from Triple-A Norfolk earlier in the day.

“We needed that,” Matheny said. “He’s had a lot of success in this ballpark and we needed that little bit of a jolt. He did not disappoint.”

Lowther allowed one run and three hits with two strikeouts and two walks over six innings in his second major league start.

“He threw the ball really well,” Orioles manager Brandon Hyde said. “I was really happy with the strikes. He worked ahead of hitters. I liked the tempo on the mound.”

Mullins responded with a two-out solo shot in the bottom half that gave the Orioles the lead.

Orioles: SS Ramón Urías was held out of the lineup and is day-to-day with recurring soreness in his upper right leg. Urías came out of Sunday’s game against the Yankees. Urias is batting .273 with seven homers and 36 RBIs over 77 games.

Rays: Jackson Kowar (0-2, 9.82 ERA) will make his second start since being recalled when rosters expanded from 26 to 28 players. The rookie did not get a decision on Sept. 1 in a 5-3 loss to Cleveland after allowing two runs and five hits with six strikeouts over six innings.