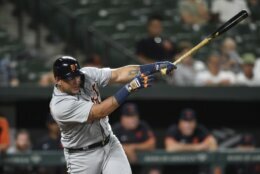 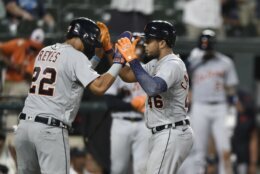 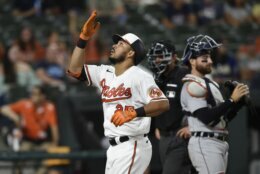 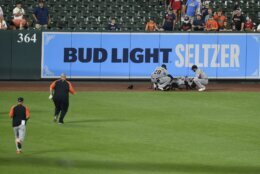 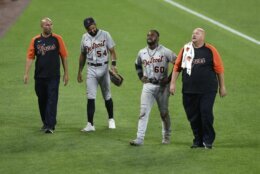 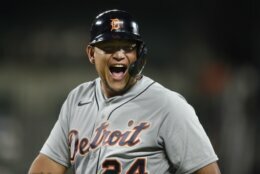 BALTIMORE (AP) — Derek Hill and Akil Baddoo took off after Anthony Santander’s drive to left-center field. Each player reached for the ball — and then they collided, sending Baddoo’s cap flying.

“It was a nasty collision. It was a ball hit probably in the perfect spot for both guys to be going full speed, and both with a chance to catch it,” Detroit manager A.J. Hinch said. “You don’t see it a lot at this level. When you see them, they’re nasty.”

That frightening moment in the eighth inning came on an otherwise successful night for the Tigers, who beat the Baltimore Orioles 9-4 on Tuesday. Willi Castro doubled, tripled and drove in three runs in a game delayed 1 hour, 54 minutes at the start due to rain.

Miguel Cabrera singled and walked, and remained two home runs shy of 500 with two games remaining on Detroit’s road trip. Casey Mize allowed three home runs and didn’t make it out of the fifth inning, but the Tigers held on after building a big early lead.

Hill did make the catch when he and Baddoo ran into each other on Santander’s flyball. Both outfielders left the game, although they were able to walk off the field after a bit of a delay.

“Obviously not good,” Santander said through a translator. “I’m an outfielder, and I can definitely relate to that. You really don’t want to see something like that.”

Hinch said Baddoo was being checked for a concussion and a shoulder injury and might need a few days off. Hill was having his ribs checked.

“When I got out there, obviously a couple trainers out there with me, both guys were pretty beat up and in a lot of pain,” Hinch said. “Very scary incident.”

The Orioles have lost six straight games, and they’ve allowed at least nine runs in all of them. The last team to allow nine runs in six consecutive games was the Kansas City Royals from Sept. 4-10, 2002.

Santander hit two solo homers for the Orioles, and DJ Stewart added a solo shot. Jeimer Candelario hit a two-run homer in the eighth for Detroit. Baltimore has allowed 24 eighth-inning runs in the last six games.

Keegan Akin (0-6) allowed six runs and seven hits in three innings. Castro opened the scoring for the Tigers in the second with an RBI double, then scored on Baddoo’s triple.

After Santander’s homer in the second, Jonathan Schoop answered with an RBI double and scored on Niko Goodrum’s single. Castro’s two-run triple made it 6-1 and capped Detroit’s four-run third.

Santander and Stewart went deep in the fourth, and the following inning, Cedric Mullins doubled. He then scored when Mize threw wildly to first for an error on Ramón Urias’ comebacker.

Marcos Diplán gave the Orioles some much-needed effectiveness in relief, throwing two perfect innings. He was called up from the minors last week and has not allowed a hit in his first two big league appearances.

“I just liked the way he’s come in and thrown strikes, and shown good stuff,” manager Brandon Hyde said. “Attacked hitters and went right after them with a good firm fastball.”