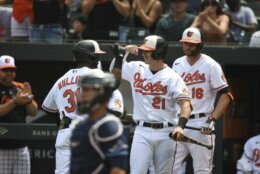 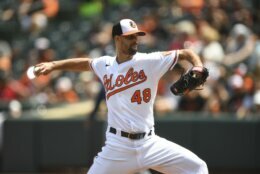 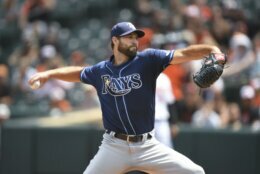 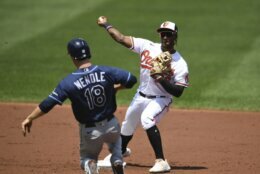 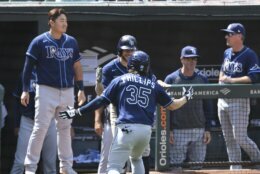 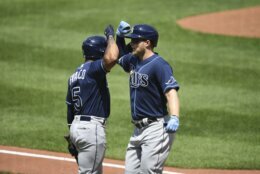 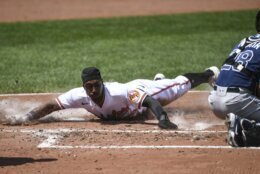 BALTIMORE (AP) — Brett Phillips capped his first career two-homer game with a tiebreaking grand slam in the eighth inning, and the Tampa Bay Rays rallied to beat the Baltimore Orioles 9-6 Sunday for a three-game sweep.

“All good teams find a way to put together got ABs and come back,” Phillips said. “That’s what we’ve been doing all year. It’s a testament to the guys in the clubhouse and their mentality. We want to win. Luckily, I was the hero today but anyone on this team can be the hero on any given day.”

Phillips launched the turnaround with a solo homer off Cole Sulser in the seventh, and Tampa Bay punished two more Orioles relievers in the eighth. Paul Fry (4-5) gave up a leadoff single and three straight walks to force in a run before Dillon Tate entered and allowed a sacrifice fly to pinch-hitter Yandy Díaz.

Tate then walked Manuel Margot to load the bases for Phillips, who sent a 1-2 pitch deep into the seats in left-center to make it 9-5. As he circled third base, his teammates in the nearby dugout cheered him on.

“We were all pumped,” manager Kevin Cash said.

“That was more exciting than the home run itself, seeing everyone fired up for me,” Phillips said.

JT Chargois (2-0) got the win with 1 1/3 innings of relief after starter Michael Wacha yielded five runs and 10 hits in five innings.

Cedric Mullins homered on the first pitch from Wacha and Anthony Santander connected in the third inning to make it 4-1.

But that was not enough offense to overcome another ineffective performance by the Baltimore bullpen.

“The whole room there is just disappointed, discouraged just cause we are so inconsistent in our bullpen,” manager Brandon Hyde said. “Sometimes our guys are pretty good out there and sometimes they aren’t. You can’t be afraid of the strike zone You have to have attack hitters.”

The Orioles did, however, end this embarrassing streak: They had allowed at least 10 runs in their previous four games, the longest run since the team moved to Baltimore from St. Louis in 1954.

Mullins became the seventh Oriole to have 20 homers and 20 steals in a single season. The others: Paul Blair, Don Baylor, Reggie Jackson, Manny Machado, Jonathan Villar and Brady Anderson, who did it three times,

Rays: RH DJ Johnson dropped to the ground after throwing a pitch in the sixth inning and promptly left the game. The Rays called the injury “right shoulder discomfort” and Cash conceded that the reliever is almost certainly heading to the IL. … OF Kevin Kiermaier wasn’t in the starting lineup after leaving Saturday night’s game with right knee discomfort. He was available off the bench.

Rays: Following a day off Monday, Tampa Bay opens a three-game series at Fenway Park against the second-place Boston Red Sox. When the teams last met July 30-Aug. 1, the Rays won all three games to move atop the AL East.

Orioles: After taking Monday off, the Orioles begin a three-game series against the visiting Detroit Tigers.