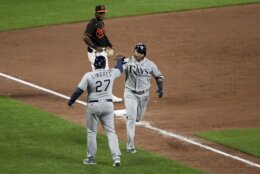 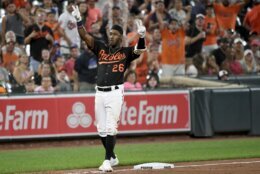 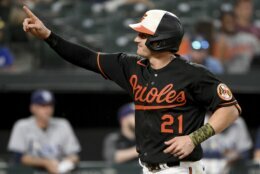 Manuel Margot had three hits and an RBI for Tampa Bay. The Rays have won six of eight.

Cruz, who was acquired from the Twins at the trade deadline, tied it at 5 in the sixth with a three-run homer off reliever Conner Greene. With 439th career homers, Cruz tied Paul Konerko for 44th place.

“That’s why I was brought here,” Cruz said. “It definitely feels good to drive those runs in, especially in those situations.”

The Rays loaded the bases off Paul Fry (4-4) with no outs in the eighth. Dillon Tate entered and allowed a two-run double to Cruz down the left-field line. Wander Franco drove in two more runs and Margot hit another single to extend the lead to 10-5.

“This team, this group, this offense is performed really, really well,” Rays manager Kevin Cash said. “On the whole, we’re really pleased with all of (the players) top to bottom.”

Drew Rasmussen (1-0) picked up the win with two scoreless innings.

Pedro Severino and Austin Hays homered for the Orioles. They are 1-9 against the Rays this season.

Cedric Mullins went 1 for 5, extending his hitting streak to 14 games, and stole his 21st base. Trey Mancini had a pair of doubles, snapping an 0-for-17 skid.

The Rays took a 2-1 lead in the second on an infield single by Kevin Kiermaier that allowed two runs to score when Orioles starter John Means was late covering first and charged with an error.

Ryan Yarbrough struggled in his last start against the Orioles, allowing six runs over 5 2/3 innings in a 6-1 loss July 19. Yarbrough ran into the same problems against Baltimore’s young lineup.

Severino hit a solo homer and Richie Martin later provided a run-scoring double that provided a 3-2 lead in the second. Hays hit another solo shot in the third.

Jorge Mateo, claimed off waivers from the Padres on Thursday, delivered a standup, run-scoring triple off Yarbrough in the fifth to extend the lead to 5-2.

Cruz, however, responded for the Rays.

“That’s why you get an impact bat like that,” Kiermaier said about Cruz. “That’s what he has done his whole career and that’s what we acquired him to do. Boy, the timing on that was absolutely perfect.”

Rays: OF Randy Arozarena was placed on the COVID-19 Related IL. He has no COVID-19 symptoms, according to Cash. “We’re just going with an abundance of caution and we’ll take it day-by-day,” Cash said. Arozarena is 17 for 37 with seven homers and 16 RBIs against Baltimore this season. OF Jordan Luplow was recalled from Triple-A Durham.

Orioles: RHP Tyler Wells (right wrist soreness) could throw a bullpen session over the next couple of days. … LHP Tanner Scott (left knee sprain) could be back mid-to-late next week. … 1B Ryan Mountcastle had to leave the game in the third after getting hit in the head with a tag trying to steal second.

Rays: LHP Shane McClanahan (5-4, 3.74 ERA) earned a victory in his first start against the Orioles on July 20. The hard-throwing rookie allowed one run and four hits with seven strikeouts over five innings in the 9-3 win.

Orioles: RHP Spenser Watkins (2-2, 3.81 ERA) suffered his second consecutive loss Aug. 1 against the Tigers. He allowed four runs and three hits over 5 2/3 innings but retired 14 in a row.