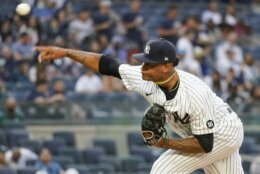 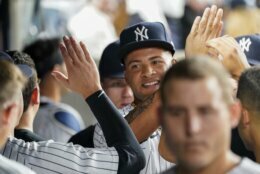 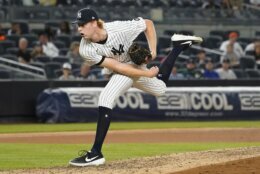 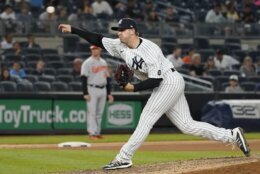 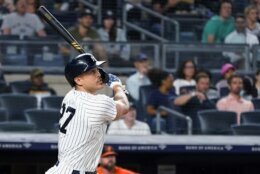 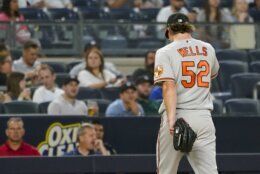 Gil (1-0) started in place of All-Star ace Gerrit Cole, who was put on the COVID-19 injured list before the game after testing positive for the virus Monday.

The 23-year-old right-hander shook off the anxiety after a sleepless night that came after he got the call that he was being promoted, and did a good impression of the Yankees ace, allowing just four singles. He struck out six and walked only one.

“The first thing was that I asked God to give me a lot of strength to be able to pitch there because I knew I was going to get nervous,” Gil said. “‘Thank God he heard my voice and gave me the blessing not to get nervous. I was totally relaxed and confident in myself.”

After allowing a pair of two-out hits in the fourth inning, Gil got DJ Stewart to fly out. Gil, who went 4-1 in 15 combined starts in Double-A and Triple-A, retired the side in the fifth and then froze Austin Hays with a slider on the outside corner to end the sixth inning with two runners aboard.

“I thought he worked quick, efficient,” New York manager Aaron Boone said. “I though Gary (catcher Sánchez) did a great job back there with him, kind of guiding him along. The willingness to entrust in some secondary pitches in some certain counts was big.”

Promoted for this one start, Gil was sent back to Triple-A after the game.

After Gil exited, Yankees relievers Stephen Ridings and Brody Koerner also made their big league debuts. Ridings’ first pitch was clocked at 100.9 mph and he struck out three while allowing a hit in the seventh. Koerner went two innings, giving up a run and two hits.

Gil, Ridings and Koerner became just the second trio of Yankees pitchers to make their major league debuts in the same game, after Lew Burdette, Dave Madison and Ernie Nevel against Washington on Sept. 26, 1950.

Gleyber Torres hit an RBI double in the second off Alexander Wells (1-2).

The Yankees scored five times in the third. Anthony Rizzo kept up his surge since joining the team last week with a single, and a run scored on the play when the throw back in from center fielder Cedric Mullins ricocheted off the second base bag and caromed toward first.

“Second time through the order, they made some adjustments against him,” Orioles manager Brandon Hyde said. “A little bit predictable for me.”

Stanton’s three-run homer, his 17th of the season, made it 9-0 in the fourth.

Aaron Judge added his 22nd homer in the eighth.

A day after an elusive cat scooted around the outfield for almost four minutes and delayed the game in the eighth inning before darting through a gate, there was no sign of the tabby. The Yankees said before the game that the cat hadn’t been seen since it left the field and ran away.

Orioles: SS Richie Martin made his season debut for Baltimore as a defensive replacement in the sixth inning. It was Martin’s first game since 2019 due to fractures in both wrists. … Wells was optioned to Triple-A Norfolk following his start.

Yankees: INF Gio Urshela (left hamstring strain) was placed on the 10-day injury list. The move is retroactive to Aug. 1. … Cole and LHP Jordan Montgomery were added to the COVID-19 injured lists. …New York purchased the contract of Koerner from Triple-A Scranton/Wilkes-Barre. … Ridings had his contract purchased from Triple-A and was added as a replacement player. … Gil was added as a replacement place from Triple-A Scranton/Wilkes-Barre. … OF Jonathan Davis was claimed off waivers from Toronto. He hit .143 (10 for 70) in 52 games with the Blue Jays this season.

Judge and Stanton homered together for the fourth time this season. The Yankees are 11-0 since 2018, including the postseason, when they both go deep.

Matt Harvey (6-10, 6.20) looks to extend his 18 1/3 scoreless inning streak when he starts the series finale for the Orioles on Wednesday. Harvey has won his last three starts. Taillon (7-4, 4.11) will start for Yankees. 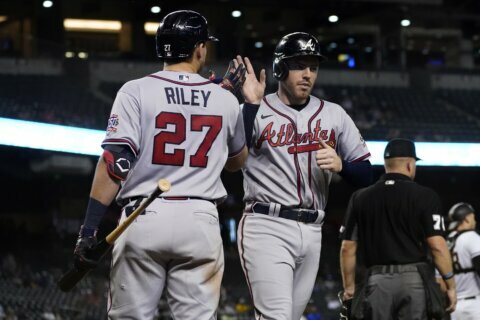