Renato Núñez homered in his return to Baltimore and the Detroit Tigers beat the Orioles 6-4 on Thursday as Miguel Cabrera sat out while one homer shy of 500.
Listen now to WTOP News WTOP.com | Alexa | Google Home | WTOP App | 103.5 FM
(1/4) 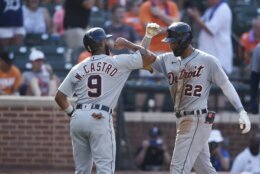 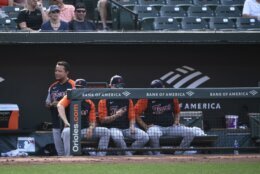 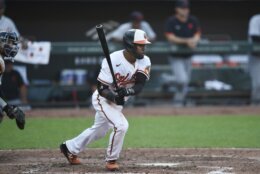 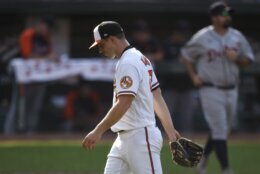 BALTIMORE (AP) — Miguel Cabrera is heading back to Detroit for what should be the Tigers’ most anticipated homestand in a while.

One homer shy of 500, Cabrera sat out the last game of Detroit’s trip Thursday, and the Tigers did fine without him, beating Baltimore 6-4 to complete a three-game sweep.

“I’m hoping he proves us right — to hit it at home in front of our fans, and hit it in a win,” manager A.J. Hinch said before the game.

Cabrera hit homer No. 499 on Wednesday night, and afterward Hinch said the 38-year-old slugger would play Thursday as well. But Hinch changed course and left Cabrera out of the lineup, citing the heat and the fact that rain delays had made for some long nights at the ballpark earlier in the series.

The temperature at game time Thursday was 97 degrees.

Detroit begins a three-game series at home against Cleveland on Friday night, then hosts the Angels for three games next week.

Renato Núñez homered in his return to Baltimore, and Victor Reyes and Robbie Grossman also went deep for Detroit. The Orioles have lost eight in a row.

“It feels amazing,” Núñez said. “It was such a great game.”

The Tigers, who started 9-24, are now percentage points ahead of Cleveland for second place in the AL Central.

Matt Manning (3-5) allowed three runs and eight hits in six innings for Detroit, equaling the longest start of his debut season. Kyle Funkhouser followed in relief, and Michael Fulmer pitched two scoreless innings for his seventh save in nine chances.

Baltimore put men on first and second with one out in the ninth, but Cedric Mullins, who had three hits on the day, hit into a force play. Austin Hays then did the same to end it.

DJ Stewart hit solo homers in the fourth and sixth innings for the Orioles, but John Means (5-4) allowed six runs and eight hits in 4 1-3 innings. Means wasn’t about to blame his performance on the heat.

Núñez hit 50 homers for the Orioles from 2018-20, but he was released after last season. He hasn’t played much for Detroit, but Cabrera’s absence left an opening in the lineup, and Núñez hit the first of two two-run homers for the Tigers in the fourth. Reyes had the other to make it 5-1.

Grossman hit his 18th homer of the year in the fifth.

Mullins extended his hitting streak to 19 games with a first-inning single, and he eventually opened the scoring by coming home on a double steal. With men on first and third, Anthony Santander broke early for second, and as the Tigers tried to chase him down, Mullins broke for the plate and made it.

Jeimer Candelario tied it with an RBI double in the fourth.

Tigers: C Grayson Greiner experienced cramping and left the game early. OF Jacob Robson pinch-hit for him in the sixth and made his major league debut, going 0 for 2. … Detroit put utilityman Niko Goodrum (left groin strain) on the 10-day injured list and transferred LHP Matthew Boyd (left arm discomfort) to the 60-day IL.

Tyler Alexander (2-1) takes the mound for the Tigers against Cleveland’s Zach Plesac (6-4).

The Orioles open a series at Boston on Friday night. Spenser Watkins (2-3) starts for Baltimore against Nick Pivetta (8-5).