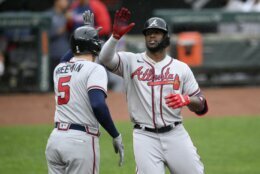 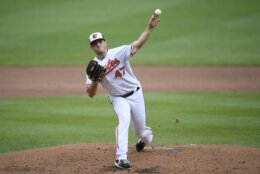 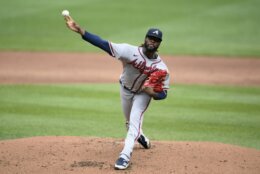 BALTIMORE (AP) — The Atlanta Braves haven’t lost in nine games and the Baltimore Orioles haven’t won in twice that many.

That doesn’t mean their latest matchup was a foregone conclusion.

“We just take every win for what it is, and then on to the next one,” Braves right-hander Touki Toussaint said. “We know how hard this game is.”

Jorge Soler homered, Toussaint pitched effectively into the sixth inning, and the surging Braves beat Baltimore 3-1 on Sunday, extending the Orioles’ losing streak to 18 games. Atlanta has won nine in a row and 16 of its last 18.

Baltimore’s skid is the longest in the major leagues since Kansas City dropped 19 straight in 2005. This was only the third time during this streak that the Orioles lost by two runs or fewer.

But the Braves didn’t seem to take Baltimore lightly.

“These teams, they’re in a tough situation sometimes,” Atlanta manager Brian Snitker said. “It’s real easy to go into that situation and get swept before you know what the heck happened.”

Adam Duvall added a two-run double for the Braves, who came into the day with a five-game lead over Philadelphia atop the NL East. Atlanta wrapped up a 9-0 trip and has won a franchise-record 13 consecutive road games.

Toussaint (3-2) allowed a run and five hits in 5 1/3 innings. He walked three and struck out five.

Atlanta used five relievers. Luke Jackson struck out the side in the eighth and Will Smith finished for his 28th save in 32 chances.

“I thought today was going to be the day,” Means said. “Felt good, felt like things were going in our favor, and it just didn’t happen.”

Soler opened the scoring with one out in the fourth when his drive cleared the wall in left field for a solo homer. Duvall’s two-out double made it 3-0.

Ramón Urías hit an RBI double with two outs in the bottom of the inning for the only Baltimore run. The Orioles went 1 for 9 with men in scoring position.

“I have no problem with effort,” Baltimore manager Brandon Hyde said. “We’re not winning games. We’re not executing. We’re very inexperienced. We got beat this series by good pitching.”

A light rain fell through much of the game, but there were no delays.

All three Atlanta runs were driven in by players the Braves acquired in trade-deadline deals this year. Soler and Duvall are helping Atlanta withstand the absence of injured outfielder Ronald Acuña Jr.

Orioles: 2B Jorge Mateo was shaken up after beating out an infield single in the seventh, but remained in the game. … OF DJ Stewart (knee) returned after missing four games. He went 0 for 2 and was removed for a pinch-hitter in the sixth.

Major League Baseball announced the Orioles and Boston Red Sox will play in next year’s Little League Classic at Historic Bowman Field in Williamsport, Pennsylvania, on Aug. 21, 2022. The event will serve as a home game for Baltimore.

Those teams were scheduled to play in the 2020 Little League Classic, but it was canceled due to the coronavirus pandemic.

Atlanta took advantage of some weaker opponents on this road trip, when it faced Washington and Miami in addition to the Orioles. Now the Braves get the Yankees, Giants and Dodgers in their next eight games.

Baltimore has Monday off before hosting a three-game series against the Los Angeles Angels. The Orioles send RHP Spenser Watkins (2-5) to the mound Tuesday night against RHP Dylan Bundy (2-9), a first-round draft pick by Baltimore in 2011. He last pitched for the Orioles in 2019.