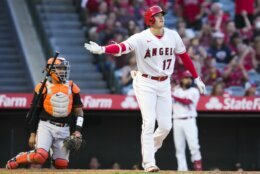 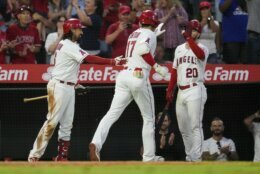 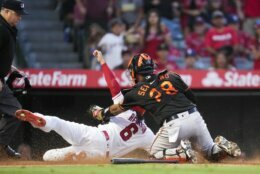 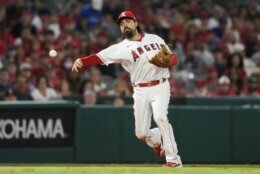 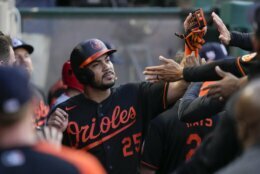 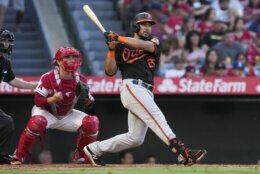 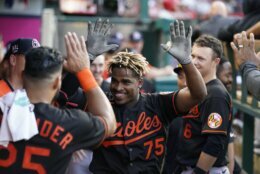 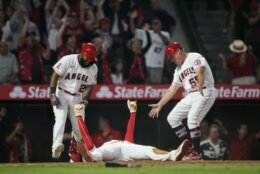 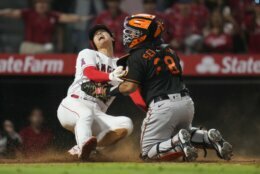 ANAHEIM, Calif. (AP) — Angels fans have seen plenty of Sho-time during the first half of the season. On Friday night, they might have witnessed The Greatest Sho.

One day after being named to the All-Star Game for the first time, Shohei Ohtani went deep twice to reach 30 home runs on the season and then scored the winning run on Jared Walsh’s two-out single in the ninth inning, giving Los Angeles Angels an 8-7 victory over the Baltimore Orioles.

It is the third time in Ohtani’s four-year career in the majors that he has homered twice and also had a stolen base.

Ohtani’s transcendent play over the past month has even caused manager Joe Maddon searching the dictionary for new ways to describe his play.

“Maybe supercalifragilisticexpialidocious,” said Maddon, which is appropriate considering Disneyland is a stone’s throw from Angel Stadium.”Everytime he swings the bat it looks like it could be a home run. He has the patience to draw a walk and then is a really aggressive and astute base runner. And then he pitches. He’s always prepared and under control. It’s an All-Star performance above and beyond.”

Ohtani drew a walk off Paul Fry (2-3) with one out in the ninth. After Anthony Rendon was caught looking for the second out, Ohtani stole second with Walsh up for his 12th stolen base of the season. Ohtani then scored on Walsh’s single to right, sliding home and beating the tag of Pedro Severino at home.

“I knew I was going to be waved home but watching Walsh, that was a hard hit so I wasn’t 100% sure. I had no doubts though that I was going to try and score at full speed,” Ohtani said.

The Japanese two-way sensation is the first player in AL history to reach 30 homers and at least 10 stolen bases in the team’s first 81 games of the season according to Stats. The only NL players to have accomplished it are Chicago Cubs slugger Sammy Sosa (1998) and Albert Pujols (2009 with St. Louis).

It is also the 22nd time a player has reached the 30 homer mark at the 81-game mark in a team’s season. Pujols was the last to do it in 2009. The last time it happened in the AL was Jose Canseco with Tampa Bay in 1999.

Ohtani, who was named the AL Player of the Month for June earlier Friday, shows no signs of slowing down. He has 13 homers in the past 15 games.

Ohtani’s solo shot to right on the first pitch of the third inning was No. 29 and set an Angels record for most homers by the All-Star break. When he hit a two-run drive on a 2-1 sinker by Dillon Tate in the fourth inning to put Los Angeles up 7-6, he surpassed Babe Ruth’s 1919 mark of most round trippers by a batter with at least 10 games pitched in a season.

“He pretty much single handedly beat us. He’s the hottest hitter on the planet right now,” Baltimore manager Brandon Hyde said. “It’s deep home runs. You walk him and he’s going to steal second on you. It’s plus plus speed and plus plus power and he’s locked in.”

Rendon had three hits while José Iglesias homered and drove in a pair of runs for the Angels, who have won two straight and four of their last five. Raisel Iglesias (5-3) pitched 1 2/3 innings and helped anchor a Los Angeles bullpen that allowed only one run in 6 1/3 innings after starter Griffin Canning struggled.

Trey Mancini and Domingo Leyba homered while Anthony Santander drove in three runs for the Orioles, who had a three-game winning streak snapped.

Baltimore jumped out to a 2-0 lead on two-out solo shots in the first and second innings by Mancini and Leyba before the Angels evened it in the second when Iglesias had a two-run drive to left field.

The Orioles put up four in the third to chase Canning and go up 6-2. Austin Hays and Mancini reached on singles before Ryan Mountcastle drew a walk to load the bases. Santander followed with a three-run double to the right-field wall and scored on Severino’s double to left.

Los Angeles drew within 6-4 in the third on Ohtani’s solo shot and Max Stassi’s RBI single before taking the lead in the fourth. David Fletcher’s RBI base hit got the Angels within a run before Ohtani gave them the lead with a two-run drive to left.

Hayes’ double to left-center in the sixth scored Cedric Mullins to even it at 7.

Baltimore’s Keegan Akin and Canning were long gone by the time this game was decided.

Akin went three innings, marking the first time in seven starts the left-hander hasn’t made it to the fourth inning. Akin allowed four runs on seven hits, struck out three and walked one.

Canning is the second straight Angels starter who went less than three innings. The right-hander went only 2 2/3 innings and was charged with six runs on six hits and two walks.

Orioles: RHP Hunter Harvey was placed on the injured list after suffering a right lat strain on June 30. Hyde said he the best case scenario is that Harvey misses a month. … 3B Maikel Franco (right ankle sprain) was out of the lineup but did some rehab work before the game.

Angels: OF Justin Upton (right low back strain) is continuing to improve. He will be evaluated again on Saturday, and if everything checks out could be activated before Sunday’s series finale.

Angels RHP Alex Cobb (5-3, 5.09 ERA) faces his former team. Cobb pitched for the Orioles from 2018-20 before Los Angeles acquired him in a trade before the start of spring training. He will be opposed by Baltimore RHP Jorge López (2-10, 5.92 ERA), who has lost four of his last five starts. 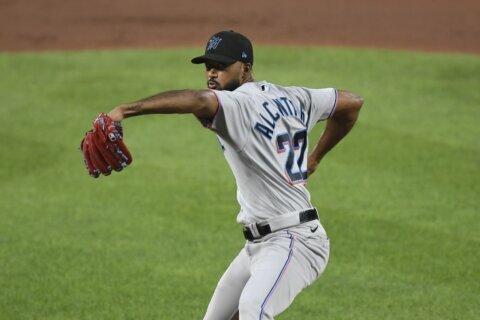