The irony is that neither Arizona nor Baltimore has the worst road record in its league. That’s of little consolation…
Listen now to WTOP News WTOP.com | Alexa | Google Home | WTOP App | 103.5 FM

The irony is that neither Arizona nor Baltimore has the worst road record in its league.

The Diamondbacks have dropped 23 straight away games, setting a major league record. The Orioles aren’t far behind with their 19-game skid. Both streaks are still active, so there’s no telling how much longer this will go on. Baltimore has a home series with Houston before leaving on a 10-game road trip. Arizona’s next road series starts Friday against a talented San Diego team.

The Orioles actually had some success on the road early in the season, so their 11-25 mark away from home is not at bad as Texas’ 10-27 record. And in terms of winning percentage, the Diamondbacks (9-31) don’t even have the worst road mark in their own division. That belongs to Colorado, which is a woeful 5-27.

But the attention right now is on Arizona, which went all of May and now over half of June without a road win. The Diamondbacks nearly got one Tuesday night in San Francisco, when they took a 7-0 lead in the second inning. The Giants, however, chipped away, and they eventually won 9-8 after Mike Yastrzemski hit a grand slam in the eighth.

That was road loss No. 21 in a row. The major league record was 22, by the 1963 New York Mets and the 1943 Philadelphia Athletics. Now Arizona has surpassed that total as well.

At least the Orioles have won some home games recently. The Diamondbacks are also on a 17-game losing streak overall.

Kyle Schwarber hit three home runs in Washington’s 5-2 victory over the New York Mets on Sunday. The Nationals are back within three games of .500 after winning eight of their last 10.

The Orioles were back home by Saturday, but their fortunes weren’t much better when they hosted Toronto. They led 7-4 with two outs in the top of the ninth before Marcus Semien drew a bases-loaded walk and Bo Bichette hit a two-run single to tie it. The Blue Jays weren’t done. Vladimir Guerrero Jr. added a two-run double and Randal Grichuk brought Guerrero home with a double to cap a six-run inning.

Baltimore’s win probability had peaked in the bottom of the eighth at 98.4%, according to Statcast. The Orioles had men on first and second with nobody out but didn’t score, and they ended up losing 10-7 after Toronto’s big rally.

Cleveland trailed Pittsburgh 11-1 before scoring six runs in the seventh and three in the eighth. The Indians actually had men on first and second with one out in the ninth — their win probability was back up to 27.5% at that point — but Richard Rodríguez retired the final two batters to preserve an 11-10 win for the Pirates.

The New York Yankees have pulled off a record-tying three triple plays this season, and two of them came in a span of four days. The most recent one helped closer Aroldis Chapman out of a ninth-inning jam against Oakland on Sunday. Chapman walked two batters before Sean Murphy hit a grounder to third, and the Yankees whipped the ball around the horn for a 5-4-3 triple play, wrapping up their 2-1 win.

Both Baltimore and Arizona held the opposition hitless in their most recent road victories. John Means threw a no-hitter for the Orioles in a 6-0 win over Seattle, and Madison Bumgarner held the Braves without a hit in Arizona’s 7-0 victory in a seven-inning game. 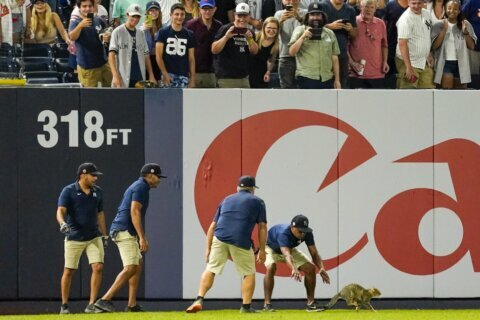 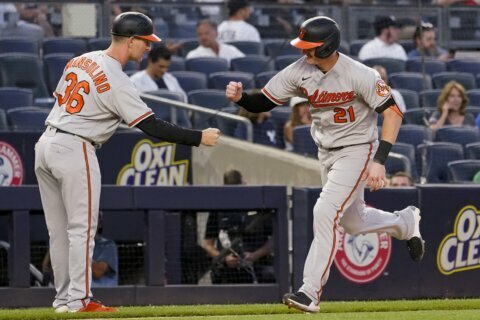