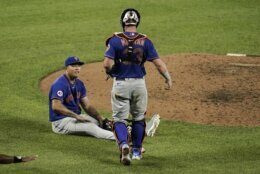 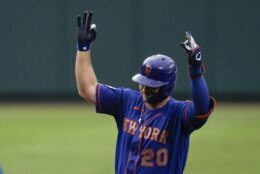 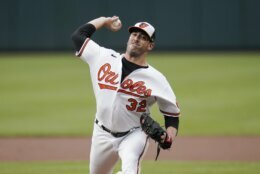 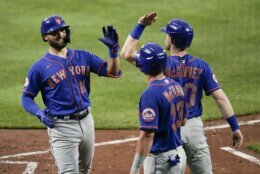 “You couldn’t be any more proud,” he said. “Every single guy that’s put on the Mets’ uni has just helped us along the way.”

Kevin Pillar and Billy McKinney each homered twice, and the Mets beat Matt Harvey decisively for the second time this season, routing the Baltimore Orioles 14-1 on Wednesday night. New York has been beset by injuries — and newly acquired star Francisco Lindor has had his struggles — but the Mets extended their lead in the NL East to 3 1/2 games over second-place Atlanta.

Harvey, who helped New York win the National League pennant in 2015, has faced the Mets twice this year, on May 12 and on Wednesday. New York won the May matchup at Citi Field 7-1.

Harvey (3-7) allowed seven runs and eight hits in both games. He lasted 4 1/3 innings the first time and three innings Wednesday — when the crowd in Baltimore included plenty of Mets fans making their presence felt as their team poured it on.

“I play for the Orioles. I’m not here for Mets fans or anything like that. I appreciate the Orioles fans that were here,” Harvey said. “I have to be better in front of my home crowd, and I guess I just have to work harder.”

Pete Alonso and Mason Williams also homered for New York. Taijuan Walker (5-2) allowed a run and five hits in seven innings, with a walk and nine strikeouts. He lowered his ERA to 2.07.

Pillar had three hits, including his first two home runs since he was hit in the face by a fastball May 17 and missed about two weeks.

“When I started coming back, when I was able to hit in the cage, there were just some things — I feel like it’s hard to kind of recreate your stance and your setup and your feel, when you miss that much time,” Pillar said. “I just got in the box, or in the cage, kind of opened my stance up a little bit, just felt like I gave myself a little bit better visual, kind of tinkered with my hand positioning, and it just felt good.”

Alonso also had a three-hit night, bookending it with a first-inning home run and an RBI double in the ninth. McKinney had three hits as well.

For the second straight night, Alonso started the scoring with a two-run homer in the first. Baltimore answered with an RBI single in the bottom of the inning by Ryan Mountcastle, but the Mets broke the game open by scoring five times with two outs in the third. James McCann and McKinney hit consecutive RBI singles, and Pillar followed with a three-run shot to left that made it 7-1.

McKinney added a solo homer in the fifth, and Pillar and Williams hit back-to-back solo shots in the eighth. McKinney closed out the scoring with a three-run homer in the ninth.

Baltimore’s Cedric Mullins struck out twice, ending a run of 37 plate appearances without a strikeout. Mountcastle, however, has driven in a run in eight straight games.

The Mets have won nine of Walker’s 11 starts this season.

“He’s having a great year, so give him credit,” Orioles manager Brandon Hyde said. “I’m really impressed how far he has come, in seeing him over the years.”

Mets: Rojas said RHP Carlos Carrasco (right hamstring strain) is playing catch but not throwing side sessions. The manager said there’s been no reinjury, but the team doesn’t want to rush him. … Rojas was noncommittal about whether backup INF Luis Guillorme (right oblique strain) would be back for Friday’s game against San Diego, but his return seems imminent.

The Mets and Orioles are both off Thursday. New York sends ace Jacob deGrom (5-2) to the mound Friday night for the start of a home series against the Padres. Baltimore is at Tampa Bay, with Keegan Akin (0-0) getting the start.