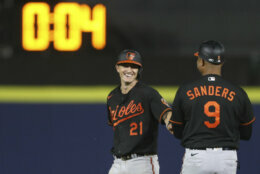 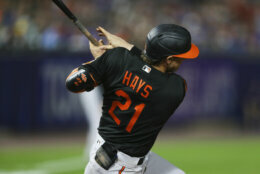 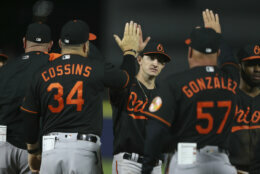 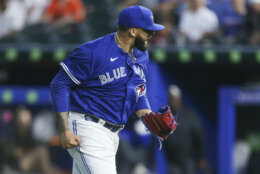 Baltimore’s road skid was tied for the second-longest in AL history, trailing only the 22 losses in a row by the 1943 Philadelphia Athletics. The last-place Orioles won for the second time in 16 games and improved to 24-52, including 12-26 away from home.

“We’re partying like we won a wild-card game here right now,” Orioles manager Brandon Hyde said over music blaring in the visiting clubhouse. “And rightfully so. We haven’t had much to celebrate here lately.”

Paul Fry (1-2) retired the side in the ninth inning, and Cole Sulser pitched a scoreless 10th for his second save.

The Orioles took their first lead in the 10th inning after Toronto’s Trent Thornton (1-3) walked three batters and forced in Trey Mancini, who started the inning as the automatic runner under pandemic rules.

Marcus Semien hit a two-run double for the Blue Jays, who had won five straight.

Baltimore tied the game in the eighth inning by scored four runs — one more than the Orioles produced over the past four losses. Ryan Mountcastle and pinch-hitter Anthony Santander each drove in runners who were walked by reliever Tyler Chatwood before scoring on Hays’ double off Tayler Saucedo.

“The bullpen didn’t do their job.” Blue Jays manager Charlie Montoyo said. “When you walk that many people in the eighth and (10th) inning, you’re probably not going to win those games.”

“It was a great team win, great comeback,” said Mullins, who contributed two hits, a walk and a run. “It’s important for us to try to keep our morale up during times like this. We know we have a talented group of guys. It’s just a matter of putting it together. We were able to do a little bit of everything today and come out with a win.”

The Blue Jays’ bullpen squandered a solid outing from rookie starter Alek Manoah, who pitched while appealing a five-game suspension for hitting the Orioles’ Maikel Franco with a pitch last weekend. Manoah allowed four hits, two walks and an unearned run while striking out six batters in six innings.

“It’s an emotional deal when he’s facing the same team that he had problems a week ago,” said Montoyo, who served a one-game suspension following Manoah’s ejection. “He did a great job. He passed the test.”

Guerrero energized the crowd on his bobblehead night and put the Blue Jays ahead with his home run in the third inning. He lined a first-pitch fastball to center field to move one ahead of the Los Angeles Angels’ Shohei Ohtani, who homered earlier Friday.

Randal Grichuk made it 3-1 when he tripled off the right-field wall and scored on a two-out infield single by Lourdes Gurriel Jr., who had three hits.

George Springer gave the Blue Jays an early lead when he homered on a slider in the second inning. Springer’s third homer was his first hit in three games since returning from the injured list.

The Orioles snapped a scoreless streak spanning 26 2/3 innings with a tying run in the third.

Matt Harvey gave up three runs and six hits in 5 2/3 innings and is 0-8 in his last 10 starts. Harvey returned to the Buffalo ballpark where he was a Triple-A All-Star in 2012 while in the Mets farm system.

“Winning Major League games are a lot of fun,” Harvey said. “Especially where we’ve been at on the road the last couple months. It’s been frustrating. So we’ll definitely remember what winning is like again and get back out there and try to keep the streak going.”

Guerrero bobblehead dolls with a home run counter were give to the first 7,000 fans, leading to longer-than-usual lines outside the gates in Buffalo.

Baltimore recalled LHP Alexander Wells from Triple-A Norfolk on Friday and selected the contract of RHP Konner Wade. In corresponding moves, RHP Mickey Jannis was designated for assignment and RHP Dean Kremer was optioned to Norfolk. Kremer will have an extended stay in the minors, Hyde said, following a rough start Thursday in the Blue Jays’ 9-0 win. The 25-year-old rookie gave up six runs, two hits and five walks while getting just one out, raising his season ERA to 7.25. The Australian-born Wells, 24, was available out of the bullpen Friday and could take Kremer’s spot in the starting rotation Tuesday in Houston.

Blue Jays: LHP Ryan Borucki (forearm) threw a bullpen session Friday for the first time since going in the injured list May 14. … Montoyo said he preferred to avoid using RHP Joel Payamps (back), but he was prepared to pitch the 11th inning if needed.