NEW YORK (AP) — The New York Mets have hired Tony Tarasco to be their first base coach, bringing the former outfielder back to the franchise where he ended his playing career.

The Mets announced the hiring Wednesday. The 50-year-old Tarasco will take over for Tony DeFrancesco, who is moving to a new role as senior advisor for player development and scouting.

Tarasco was born in Manhattan and is one of 139 players to play for the Yankees and Mets, but he’s best known in New York for a play in the 1996 AL Championship Series when he was with the Baltimore Orioles. Tarasco was chasing Derek Jeter’s long fly in right field when 12-year-old Jeffrey Maier reached over the wall and deflected the ball into the seats. Umpires ruled it a home run, and the Yankees went on to win the series.

Tarasco played in 60 games for the Mets in 2002, his final season as a big leaguer.

Tarasco has worked in the San Diego Padres farm system the past five years, including as a manager with Class A Lake Elsinore and a coordinator for outfield and baserunning. Prior to that, he was a minor league coach in the Washington Nationals organization for 10 seasons. 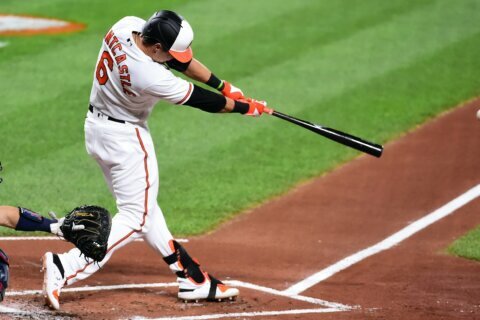