NEW YORK (AP) — Pete Alonso hit his second dramatic homer in a week Wednesday night, when his shot to center field leading off the eighth inning lifted the New York Mets to a 7-6 win over the Baltimore Orioles.

Alonso hit a walk-off, two-run homer to give the Mets a 9-7, 10-inning win over the New York Yankees last Thursday in the first game the Mets played following the death of franchise icon Tom Seaver.

That homer capped a pair of three-run comebacks for the Mets, who preceded Alonso’s tiebreaking drive Wednesday by coming back from deficits of 5-1 and 6-3 thanks to all-around contributions from outfielders Jeff McNeil and Michael Conforto.

“Every single win just matters so much, especially at this point of the year,” Alonso said. “And the way that we won today — there’s so many incredible instances where the game changed and it was just from a tremendous group effort.”

McNeil made a running catch of Jose Iglesias’ fly ball to deep left for the second out of the sixth before the Orioles loaded the bases against Jared Hughes via a walk and two hit batters.

Rio Ruiz followed with a shot to right, but Conforto robbed Ruiz of a likely three-RBI hit by racing back and making a lunging, snow-cone catch just before hitting the wall. Conforto juggled the ball in his glove as he staggered to a stop at the fence.

“Definitely the kind of a play (where) you almost surprise yourself,” Conforto said. “I had a good line on it. I was able to find the wall before I made my jump. The bullpen was yelling that I had room, and that situation, you’ve just got to go up for it. Luckily, my glove was just long enough.”

While Ruiz put his hands on his helmet in disbelief, Mets pitcher Justin Wilson raised his arms and first baseman Dominic Smith sported a wide smile as a grinning Conforto jogged off the field and players in the Mets’ dugout hooted and hollered in appreciation.

“Everyone was super excited. Everyone just couldn’t believe it,” manager Luis Rojas said.

It was the second defensive gem of the night for Conforto, who threw out Chance Sisco trying to stretch a leadoff single in the second.

“They really played great defense,” Orioles manager Brandon Hyde said. “Hats off to them for winning that game. They really won it defensively.”

Andres Gimenez homered in the bottom of the sixth to tie the score before Alonso, who had two singles in his first three at-bats, homered off Hunter Harvey (0-1).

The Mets came back from a six-run deficit Monday before falling to the Philadelphia Phillies 9-8 in 10 innings.

“The group is always thinking that we’re going to come back,” Rojas said.

Jeurys Familia (2-0) threw the eighth inning and Edwin Diaz worked around a leadoff single to earn his third save.

Run-scoring singles by Renato Nunez, Ryan Mountcastle and Hanser Alberto and a two-run double by Ruiz staked the Orioles to their four-run lead. But Baltimore stranded nine runners in the final four innings.

“Wish we could have punched a couple more across, but give credit to the Mets and the defense they played,” Hyde said. “There was an outstanding defensive effort that stopped a lot of rallies and saved a bunch of runs.”

Mountcastle went 4 for 4 while Stewart was 3 for 3.

Seven players and staff members — four Orioles and three Mets — wore No. 21 in honor of Roberto Clemente Day, which was observed throughout Major League Baseball.

Alberto and Mets pitcher Steven Matz are their team’s nominees for the Roberto Clemente Award, which is given annually in honor of the Pirates legend, who died while flying to Nicaragua on a humanitarian mission on New Year’s Eve 1972.

Stewart and McNeil weren’t the only players to extend streaks. Ruiz’s two-run double in the third gave him a 10-game hitting streak. However, Jose Iglesias went 0 for 5 as his hitting streak was snapped at 13 games.

Orioles: CF Austin Hays (rib) had a live batting practice session in Maryland postponed by rain. … Hyde said he hoped RHPs Shawn Armstrong (back) and Alex Cobb (undisclosed) could return by the end of the week.

Mets: RHP Robert Gsellman was placed on the 10-day injured list and is out for the season with a broken rib suffered while delivering his final pitch Tuesday night. RHP Drew Smith was recalled from the alternate site. … Rojas said he expected both RHP Dellin Betances (lat) and Matz (shoulder) to return before the end of the season.

Orioles: LHP Keegan Akin (0-0, 2.08 ERA) faces the Yankees for the second straight time as the Orioles continue their tour of New York. Baltimore is in the middle of 16 straight games against the Yankees, Mets and Blue Jays, who are based in Buffalo this season. 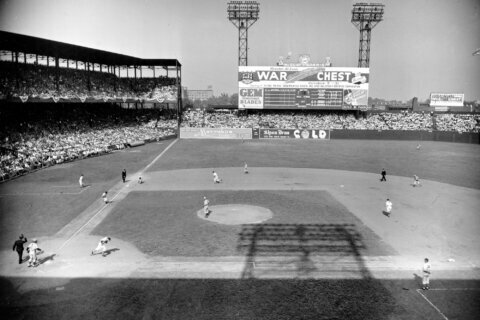 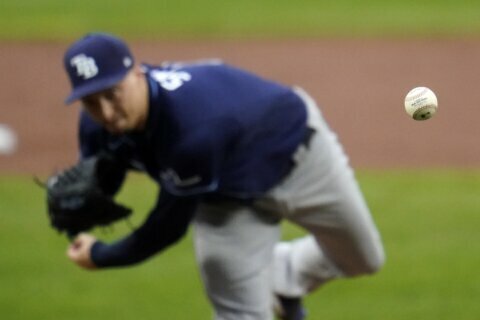 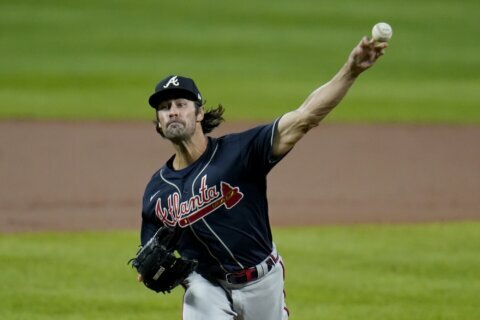