BALTIMORE (AP) — In early March, Don Mattingly figured the rebuild of the Miami Marlins just might begin to show results this season.

The world, and the Marlins, are vastly different since then. Yet, somehow, this baseball team has found a way to overcome a team-wide coronavirus outbreak, an unwanted eight-day layoff and a whole lot of youth to fashion the best record in baseball.

Jonathan Villar hit a first-pitch leadoff homer to spark a robust offensive performance by the Marlins, who beat the Baltimore Orioles 8-7 Thursday night to complete a startling four-game sweep and make Mattingly the winningest manager in franchise history.

Villar had three hits and Brian Anderson drove in three runs for the upstart Marlins, many of whom spent last week holed up in a Philadelphia hotel after 18 players tested positive for COVID-19.

“The whole organization is making that move forward. We felt it in spring training,” Mattingly said. “We felt it coming with our young players, and they’re not even all here yet. It feels good right now.”

The Marlins are in first place in the NL East despite coming to town Tuesday with a whole lot of rookies and free agents. According to @StatsBySTATS, Miami is the first big league to start 6-1 or better through seven games after losing at least 105 the previous season since the St. Louis Perfectos began 7-0 in 1899.

“We’re coming out ready to play. We have young guys who have a lot of energy,” Villar said.

Perhaps the feeling is infectious, because Villar drove the first offering from Wade LeBlanc into the left-field seats.

“Villar is an ambusher. (LeBlanc) should have known that,” Orioles manager Brandon Hyde lamented.

The Marlins were the “home” team because this was a makeup of a July 28 game that was to be held in Miami but postponed in the wake of the Marlins’ COVID-19 outbreak.

Batting in the bottom of the seventh, the Marlins broke a 6-6 tie with a sacrifice fly by Jesús Aguilar off Evan Phillips (1-1) and an RBI triple by Anderson.

That was enough to earn Mattingly his 282nd win with Miami, passing Jack McKeon on the team’s career list. He was given a bottle of bubbly to mark the occasion.

In their first three wins in the series, Miami relied on exceptional pitching in victories by scores of 4-0, 1-0 and 2-1. In this one, the Marlins won with their bats.

Villar’s homer sparked an 11-hit attack, and Miami needed almost every one of them because starter Jordan Yamamoto gave up three one-run leads and Jorge Guzman, in his major league debut, yielded successive solo homers to Dwight Smith and Renato Núñez to create a sixth-inning tie.

But Mike Morin (1-0) pitched two shutout innings and Brandon Kintzler worked the ninth for his third save.

It was Miami’s first four-game sweep since April 2016, against the Dodgers.

Baltimore wasted four home runs, including two by Núñez and Chance Sisco’s first of the year. The drives were offset by two errors and several other miscues that didn’t show up in the box score.

“We had a bad night defensively, doing things that we hadn’t been doing,” Hyde said.

Although the Marlins haven’t immediately suffered for their time off, the schedule revision released Thursday does Miami no favors. The Marlins will finish the regular season with 27 games over the final 23 days, which includes no off days and four double headers in a 10-day span.

Chris Davis had a solid spring training, batting .409 with three homers and nine RBIs in 12 games. That gave the Orioles hope that he might be ready to provide some return on a $161 million, 7-year contract he signed in 2016.

Alas, spring training was halted by the coronavirus outbreak and Davis has reverted to the form he displayed during the last seasons, when he batted . 168 and .179.

The former two-time home run champ batted eighth Thursday and went 1 for 4. He’s got two hits this season and is hitting .087.

Kintzler found an alternate use for the ironing board in his hotel room while being quarantined in Philadelphia.

“I needed to figure out how I could simulate a workout, so I got the ironing board out and started taking the tops off the coffee tables,” Kintzler revealed Thursday. “They were heavy stones, so I would add them to the ironing board and carry it around like a front rack. I was doing step-ups on the bed and lunges.”

Marlins: Rookie CF Monte Harrison crashed into the wall chasing a triple by Anthony Santander in the third inning, but stayed in the game after being examined by the team trainer.

Orioles: INF Rio Ruiz missed a fourth straight game with a sore right shoulder. Manager Brandon Hyde hopes to have him back Friday or Saturday. … SS José Iglesias played the field for the first time since July 29 after being hampered by a sore left quad.

Marlins: Still waiting to play their first real home game of the season, the Marlins head north to face the New York Mets on Friday night in the opener of a three-game set. 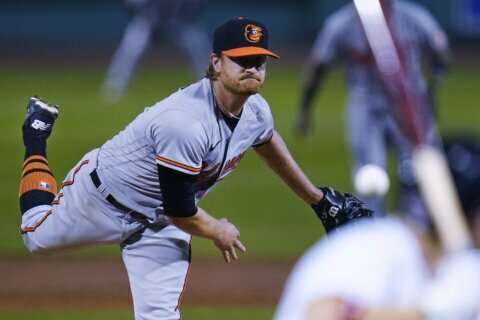