In the first meeting in 50 years of major league teams both 50 or more games under .500, DJ Stewart and Trey Mancini homered to lead the Baltimore Orioles over the Detroit Tigers 6-2 on Friday night.
Listen now to WTOP News WTOP.com | Alexa | Google Home | WTOP App | 103.5 FM
(1/5) 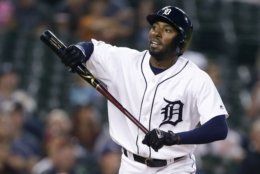 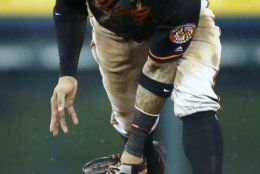 DETROIT (AP) — Baltimore beat Detroit in the opener of the battle of the bad.

In the first meeting in 50 years of major league teams both 50 or more games under .500, DJ Stewart and Trey Mancini homered to lead the Orioles over the Tigers 6-2 on Friday night.

“I think we can all look in the mirror at night and be proud of ourselves in the effort that we give,” Mancini said. “It doesn’t always translate into wins, but we all have so much to play for still, and we want to go out and win every game.”

In a match impacting primarily which team will pick first in next June’s amateur draft, Detroit dropped to a big league-worst 43-103, its most losses since setting a team mark at 43-119 in 2003.

Baltimore, last in the AL East at 48-99, avoided for a night ensuring its second straight 100-loss season after going 47-115 last year.

Baltimore and Detroit set a record for combined losses entering an AL series at 201.

“Not a lot happened offensively for us,” Tigers manager Ron Gardenhire said. “We had some chances early, but we made some mistakes and got down 4-0. Then when we cut it in half, they came right back and got two more. By that point, they were bringing some really good arms out of the pen.”Aaron Brooks (5-8) allowed two runs and seven hits in 5 1/3 innings to win for the third win time in four decisions. Shawn Armstrong, Paul Fry, Hunter Harvey and Mychal Givens combined for one-hit relief to drop the Orioles’ bullpen ERA to 2.73 since Aug. 20.

“Coming in as a starter, you want to throw early zeroes, but late zeroes are just as important, if not more important,” Brooks said. “It’s good to see them rolling, and I’m pretty sure they’ll keep it going.”

Jordan Zimmermann (1-11) dropped to 0-2 in seven starts since beating the Los Angeles Angels on July 29. He allowed four runs and eight hits in five innings.

Zimmermann’s night got off to a bad start when leadoff man Jonathan Villa rolled a slow dribbler that started foul but rolled back fair and hit the bag as first baseman Jeimer Candelario waited it out.

Mancini hit an RBI single in the first.

After throwing out Jordy Mercer at home plate from second base to end the fourth, Stevie Wilkerson doubled leading off the fifth to end a streak of eight straight outs by Zimmermann. Stewart homered off the right-field foul pole for a 3-0 lead and, three batters later, Chance Sisco scored on Mason Williams’ groundout.

Mancini hit a two-run homer in the seventh against José Cisnero.

Mercer and Willi Castro had RBI singles in the sixth.

Detroit entered with a big league-leading 1,459 strikeouts but Brooks did not fan any of his 16 batters. Baltimore’s bullpen struck out six.

“It’s been a lot better,” Orioles manager Brandon Hyde said of the bullpen. “When we’re aggressive and working ahead in the count, we do a nice job. It’s when we fall behind and center-cut things in bad spots when we run into trouble.”

At the park for the annual team photo, Tigers controlling owner Christopher Ilitch said he was satisfied with the organization’s progress this season.

“I believe we’re on the path,” Ilitch said. “How much longer is it going to take? How much further do we have to progress? I can’t answer that.”

Detroit dropped to 19-53 at Comerica Park. The Tigers are trying to avoid breaking the 1939 St. Louis Browns’ record of 59 home losses and Detroit’s franchise record of 58 in 2003.

The Michigan baseball team was honored before the game and Jimmy Kerr, a 33rd round draft pick and third baseman in the Tigers farm system, threw out a wild ceremonial first pitch that nearly hit his teammates behind home plate. Michigan lost to Vanderbilt in the College World Series championship. 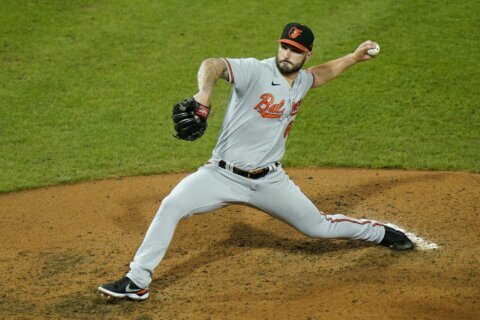