It took some big ninth-inning hits for the Tampa Bay Rays to put together a five-game win streak that pushed them to the top of the AL wild-card chase.
Listen now to WTOP News WTOP.com | Alexa | Google Home | WTOP App | 103.5 FM
(1/6) 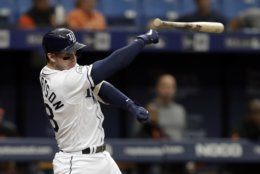 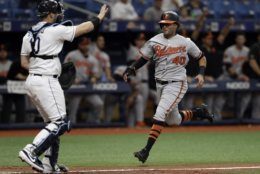 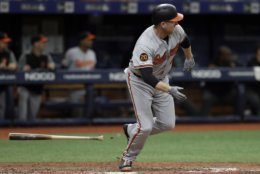 “We were frustrated after game one without a doubt but they didn’t sulk,” Cash said. “They came back out quickly and they were ready to play.”

The Rays, who had their five-game winning streak stopped with a 4-2 loss in the opener, hold a one-game lead for the first AL wild card over Cleveland, which lost 6-5 to the Chicago White Sox.

The first game of the twinbill was originally scheduled for Wednesday night, but was moved up in advance as a precaution for Hurricane Dorian. The announced crowd was 6,844.

Diego Castillo (3-8), the third pitcher in a bullpen day, allowed one hit over two scoreless innings.

Meadows hit his 26th homer, a solo shot in the fourth. The Rays went up 2-0 in the seventh when Ji-Man Choi’s hit to right bounced over Anthony Santander’s head for a triple.

On his slide, Choi was hit in the face by third baseman Rio Ruiz’s glove. Choi left the game but was seen high-flying teammates in the dugout.

“I can’t really explain what happened,” Choi said through a translator. “I just felt like I got knocked out with the glove.”

Choi is not expected to miss any time.

Avisail Garcia added an RBI single off Gabriel Ynoa (1-8), who gave up two runs and six hits in 6 1/3 innings.

Baserunning mistakes cost the Orioles in the third inning.

Chris Davis started the inning with a single and wound up at second when Meadows in left field misplayed the ball.

Richie Martin then put down a bunt that third baseman Joey Wendle fielded and made an off-the-mark throw to first that ended up in the right-field bullpen that allowed Davis to score. But Martin was called out for interference for running inside the baseline and Davis was sent back to second.

“I was just not pleased with the judgment on the bunt,” Baltimore manager Brandon Hyde said. “Looking back at it, Richie was in the line a little bit, but almost every single batter-runner is inside the line. I just thought we could use better judgment when the throw is that far off-line. But they didn’t see it that way.”

“I didn’t know what was going on, to be honest,” Martin said.

Jonathan Villar followed with a double to deep center but was tagged out in a rundown between second and third after Davis was given a stop by third base coach Jose David Flores after rounding the base.

In the opener, Ruiz and Anthony Santander homered and Mark Trumbo drove in a run with a pinch-hit double.

Ruiz’s ninth home run came in the fifth off Rays starter Trevor Richards, driving in Baltimore’s first two runs and tying it at 2.

Rays infielder Eric Sogard had his helmet and glasses knocked off by Paul Fry’s pitch in the eighth. Sogard was able off walk off the field after a brief examination by trainers and said the ball struck his shoulder first, then his helmet and nose.

“It busted my nose a little bit,” Sogard said. “I feel like that was a best-case scenario. The way it turned out, I feel very, very lucky.”

Hyde was ejected by plate umpire Lance Barrett for arguing in the eighth inning of Game 2 after pinch-hitter Trey Mancini struck out. The first-year skipper put on an old school performance, throwing his notes to the ground near the on-deck circle and then proceeding to kick dirt on the plate.

Cash and Hyde both agreed Tuesday that there was no intent in reliever Dillon Tate’s up-and-in pitch to Tommy Pham in the 10th inning Monday.

Pham took issue postgame, especially with the Orioles dugout, saying “it was kind of like they were cheering him on.”

“This is one of the quietest groups in the world and we’re in a place that’s kind of like in the Florida State League where you can hear the lights buzz,” Hyde said. “I didn’t hear anything. Even that it’s a story is pretty ridiculous.”

Both managers both expressed appreciation for a guy not feeling good about a ball being up and in.

Rays: Injured starters Tyler Glasnow (right forearm strain) and LHP Blake Snell (elbow bone chip surgery) are making progress in their rehab programs. Glasnow may be back and able to throw a few innings this weekend, while Snell could have a batting practice session or start a minor league rehab game Saturday.