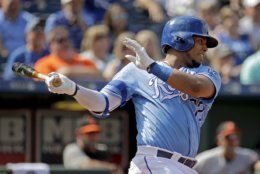 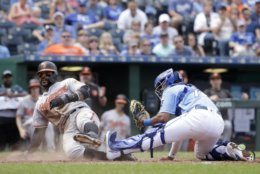 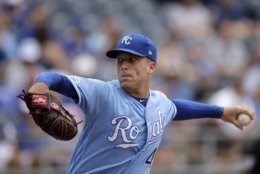 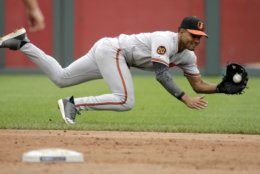 KANSAS CITY, Mo. (AP) — Adalberto Mondesi looked anything but rusty in his return to the lineup.

The speedy shortstop matched career highs with four hits and three stolen bases after coming off the injured list Sunday, leading the Kansas City Royals to a 6-4 victory over the Baltimore Orioles.

“He was right in the middle of all of our offensive scenarios,” Royals manager Ned Yost said. “He just looked great. He looked great at shortstop. I’m glad to have him back.”

That sentiment was shared by teammates.

“Mondi being back is huge for us,” pitcher Danny Duffy said. “Mondi is a very important part of our team.

“It was really nice to have him back out there doing what he does best, playing the game like it’s a game. It’s fun. It’s supposed to be fun. It hasn’t gone our way most of the time, but we have to treat every game like it’s a one-game series. That’s the mentality the rest of the year.”

Meibrys Viloria drove in the go-ahead run for the Royals with a two-out single in the seventh inning. Kansas City took two of three in a series between struggling teams.

Mondesi, who spent 41 games on the IL, led off the seventh with his third hit and stole second. With two outs, Alex Gordon drove him in with a tying double, and Gordon scored on Viloria’s single to make it 5-4.

“It was a process,” Mondesi said. “Everything went OK. I’m here and I’ll just keep playing hard. My plan was stay short, not try to do too much in the first game back. I wanted to put the ball in play, and it worked.”

Whit Merrifield added a solo homer in the eighth.

Kevin McCarthy (3-2) tossed 1 2/3 scoreless innings of relief for the win. Ian Kennedy pitched a perfect ninth for his 25th save in 28 chances.

It was another tough defeat for first-year Baltimore manager Brandon Hyde.

“Yeah, you just feel like you like Paul Fry on any left-hander and it just doesn’t happen,” Hyde said. “(Shawn Armstrong) comes in against a right-hander and walks him. Walks kill you and we just didn’t get it done in the seventh inning.”

Duffy was solid in his own return from the injured list. He gave up four runs (three earned) and seven hits in 6 1/3 innings.

Baltimore scored in the first on a sacrifice fly by Renato Nunez.

Kansas City came right back with three runs in the bottom half. Hunter Dozier drove in Mondesi and Jorge Soler with an opposite-field double. Dozier scored on Ryan O’Hearn’s single.

The Orioles tied it with four straight hits in the third. Richie Martin and Hanser Alberto scored on Trey Mancini’s single.

Baltimore regained the lead in the sixth when Jonathan Villar’s speed helped manufacture a run, with the aid of a throwing error by Viloria behind the plate.

Orioles: Armstrong was reinstated from the 10-day injured list. He had been out since Aug. 22 with a right forearm strain. … OF Mark Trumbo is expected to be activated Monday before Baltimore plays at Tampa Bay.

Royals: Duffy, Mondesi and catcher Cam Gallagher were activated from the 10-day IL. Duffy had been sidelined since Aug. 4 with a left hamstring strain. Mondesi had been out since July 17 with a left shoulder injury, and Gallagher had been on the IL since Aug. 5 with a left oblique strain. Gallagher is not expected to play against this season, except in an emergency. “I’m not playing him,” Yost said.

Orioles: RHP Asher Wojciechowski (2-7, 5.12 ERA) starts Monday afternoon when Baltimore begins a three-game series at Tampa Bay. With Hurricane Dorian bearing down on Florida, Tuesday’s and Wednesday’s games have been rescheduled as part of a single-admission doubleheader Tuesday.