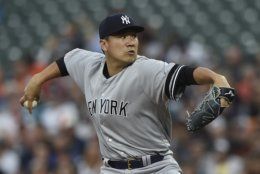 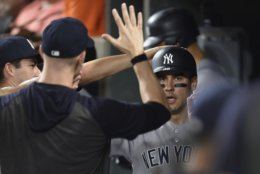 BALTIMORE (AP) — Sometimes, baseball isn’t all that mystifying. Match a hard-hitting lineup against an inexperienced pitching staff, put them both in a small ballpark, and the result is quite predictable.

Such is the case when the New York Yankees face the Baltimore Orioles at Camden Yards.

The Yankees hit five more home runs at their favorite road destination to set a major league record and win their 13th straight game in Baltimore, 9-6 on Monday night.

New York’s power surge and sixth straight win overshadowed a memorable night for Baltimore’s Jonathan Villar, who became the fifth Orioles player to hit for the cycle and first since Felix Pie on Aug. 14, 2009. Villar tripled in the third inning, doubled in the fifth, homered in the sixth and dumped a single into right field off Aroldis Chapman in the ninth.

Although it looked as if Villar had no interest in heading to second base on the poke near the line, he later said he had no idea that the single completed the cycle.

Mike Tauchman delivered a bases-empty drive in the sixth inning and a solo shot off Paul Fry (1-4) in the eighth, his first career multihomer game . Austin Romine , Brett Gardner and Mike Ford also connected for the Yankees.

“That’s been a theme for us all year,” manager Aaron Boone said. “They can come from a lot of different places, and the bottom of the order is a place where we’ve gotten really good production and a place where we feel really confident.”

New York has hit 32 home runs at Camden Yards, a single-season record for most by a visiting team in one ballpark. The mark was previously held by the Milwaukee Braves, who hit 29 at Cincinnati’s Crosley Field in 1957.

The Yankees did it in only eight games, and they can add to the record on Tuesday and Wednesday against a woeful pitching staff that has yielded the most home runs in the majors.

Ford, a rookie, didn’t need much time to realize that it doesn’t take much to hit a baseball over the close-in outfield fence on a toasty night in Baltimore.

“This is my first time here, but just seeing it tonight, the ball flies pretty good,” he said.

Orioles starter Gabriel Ynoa, part of a staff that has yielded 223 home runs, said of facing the Yankees: “You know that if you miss your pitches, something bad may happen to you.”

Since July 2018, New York has won 13 in a row in Baltimore. That matches the Yankees’ longest road winning streak against one team since they dominated the St. Louis Browns from May 1939 to June 1940.

Adam Ottavino (5-3) pitched the seventh inning for New York and Chapman worked the ninth for his 30th save.

Yankees shortstop Gleyber Torres started at designated hitter, less than 24 hours after he left a game against Boston to be treated at a hospital for a core issue. Torres underwent an ultrasound test and was given medication to deal with an injury he described as “something weird I never felt.”

Torres went 0 for 5 and jogged to first base after hitting a grounder to third in the fourth inning.

The Orioles had runners thrown out at the plate in the third and fourth innings. Trey Mancini was cut down trying to score on a double by Anthony Santander, and Jace Peterson was tossed out on the front end of a double steal.

Manager Brandon Hyde didn’t like the call on the latter play, which was upheld after a replay review.

New York No. 9 hitter Breyvic Valera hit a two-run triple and scored in the fifth for a 4-1 lead. Homers by Gardner and Tauchman made it 6-1 in the sixth before the Orioles countered with five runs in the bottom half. Peterson and Villar each homered with a man on around a sacrifice fly by Chris Davis.

Didi Gregorius singled in the fifth inning and now has reached base safely in 31 straight games against Baltimore. He’s gotten at least one hit in 29 of those games and has a 12-game hitting streak against the Orioles that began in April 2018.

Yankees: 3B Gio Urshela did not play Monday after fouling balls off both legs in the same at-bat Sunday. Urshela said he was feeling better and insisted he could play. … C Gary Sanchez (10-day IL, left groin strain) is scheduled to rehab Wednesday and Thursday at Triple-A Scranton. “He’ll catch both days and then hopefully travel to Toronto and be an active player by the weekend,” Boone said.

Orioles: OF Dwight Smith Jr. said his injured left calf is improving but he doubts that he will be fully ready to play when he’s eligible to come off the 10-day IL on Friday. . RHP Miguel Castro is still battling an illness and his availability for the series opener was “iffy,” Hyde said. Castro hasn’t pitched since July 30.

Yankees: Jonathan Holder (5-2, 6.28 ERA) will make his first start of the year on Tuesday night.