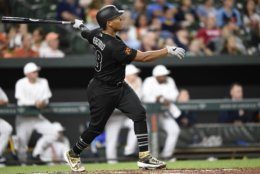 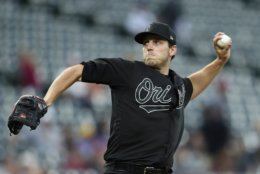 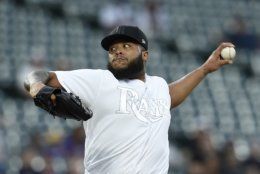 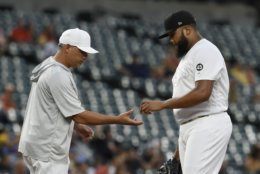 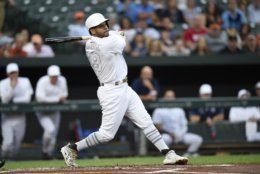 BALTIMORE (AP) — Starting for the first time in his career did nothing to turn around a sub-standard season for Tampa Bay left-hander José Alvarado.

Maybe a doctor’s exam will provide answers why the hard-throwing reliever has lost his effectiveness.

Alvarado retired only one batter before being lifted in the first inning, Austin Pruitt allowed three home runs and the Rays fell to the Baltimore Orioles 7-1 Saturday night.

Pedro Severino hit his first career grand slam for the Orioles, who took control against Alvarado and ended a run of four straight losses to Tampa Bay.

Alvarado opened for the Rays after pitching in relief 139 times over three seasons. It’s been a rough season for the lefty, and his problems continued in this unfamiliar role.

Alvarado (1-6) lasted for only 24 pitches, 15 of them out of the strike zone. He walked three, threw two wild pitches and was pulled with runners at second and third with a 3-0 count on Severino.

“He had no chance to throw the ball over the plate at that point,” manager Kevin Cash said. “I didn’t want another run to come in from a wild pitch.”

Cash said Alvarado will be sent back to Florida to receive an MRI on his left arm.

“He’s hurt, complaining of some elbow issues,” Cash said, adding that Alvarado is probably headed to the injured list.

“This is unfortunate. It’s been an unfortunate season to date (for Alvarado),” Cash said. “We’ll let the doctors check him out.”

After Alvarado left, Pruitt got Severino to hit into a double play to end the inning. Though Alvarado was charged with only one run, his ERA climbed to 4.80 — compared to 2.39 over 70 games last season.

“I felt a little pain today after that outing. I didn’t expect it,” Alvarado said through an interpreter. “But the way this season is going, it’s another thing that’s been happening. I just got to hope there’s nothing major going on and that I can come back.”

Michael Brosseau homered for the Rays, who won 11 of their previous 12 away games and came in with the best road record in the majors. Tampa Bay took the first two games of the series against the last-place Orioles to move atop the AL wild-card race.

Orioles starter John Means (9-9) allowed one run and five hits over seven innings to end a streak of four straight losing starts. He struck out seven and walked none.

“I just thought he had everything working,” Baltimore manager Brandon Hyde said. “Really made just one bad pitch.”

After Pruitt got the best of Severino in the first inning, the catcher got a second chance with the bases filled in the third and sent an 0-1 pitch into the left-field seats.

“I feel great because I helped the team,” Severino said. “I got the one pitch up in the zone and I got a great swing on it.”

In the fourth, Hanser Alberto hit a solo shot and Jonathan Villar connected on the following pitch for a 7-0 lead.

Baltimore’s Renato Núñez notched his first career steal in the third inning, taking second base standing up while the Rays focused on Alberto moving toward home from the third base.

Núñez showed his sense of humor by calling for time, bending down and reaching for the bottom of the bag, pretending to pull it out for a souvenir.

EADES GETS A LOOK

“He’s fortunate we’re in the situation we’re in,” Hyde said. “He’s got an opportunity to pitch in the big leagues.”

Tampa Bay activated OF Avisail Garcia (oblique strain) from the 10-day injured list, recalled Pruitt from Triple-A Durham and optioned OF Guillermo Heredia and RHP Aaron Slegers to Durham. This is Pruitt’s ninth stint with Tampa Bay this season.

Trey Mancini, who leads the Orioles with 29 homers and 74 RBIs, got the night off following a tough stretch at the plate.

Rays: Garcia (.278, 17 HRs, 57 RBIs) was inserted immediately into the cleanup spot. “We missed his presence in the lineup,” Cash said. “He’s having a good year. Let’s see if we can get him to pick up right where he left off.” … 2B Joey Wendle (wrist) had Saturday off from his rehab stint with Durham. There is no timetable for his return.