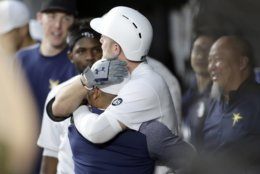 Those are marks of a playoff contender, and the Tampa Bay Rays appear poised to benefit from each facet as they strive to reach the postseason for the first time since 2013.

Meadows hit a 2-0 pitch from Ty Blach (0-2) deep into the center-field seats to send Tampa Bay to its fourth straight win over Baltimore. The drive was the highlight of an inning in which the Rays got five hits and a pair of walks.

“We got the offense going, and then Trevor Richards was just awesome,” manager Kevin Cash said.

One night earlier, Meadows hit the 259th home run allowed by the Orioles, a major league record. That number now stands at 261.

Tampa Bay has won 11 of its last 12 away games and now sits atop the AL wild-card standings. The Rays’ 42-23 road record is the best in the majors.

It’s been a rough season for Richards, who was 3-12 with Miami before being traded to the Rays on July 31 and immediately optioned to Triple-A Durham. The right-hander received a no-decision in his Tampa Bay debut on Sunday against Detroit, giving up two runs in 3 1/3 innings.

Richards (1-0) was dominant in the encore, allowing Baltimore two hits and a walk over six shutout innings, his longest outing since June 8.

“I saw some encouraging things from him in his last outing,” Cash said. “I was hoping to see some more, and we did.”

Aaron Slegers worked the final three innings, getting his first major league save despite allowing a solo homer to Jonathan Villar.

The Rays’ big second inning featured an RBI double by Kevin Kiermaier and a two-run single by Mike Zunino. Orioles second baseman Hanser Alberto made a diving stop of a two-out grounder but dropped the ball while preparing to throw, thus loading the bases for Meadows.

Blach gave up seven runs and nine hits over four innings. Claimed off waivers from San Francisco on Aug. 3, he’s toting a 12.15 ERA in three starts with Baltimore. He was sent back to Triple-A after the game.

“I feel like the numbers don’t necessarily show how well I threw the first two outings,” he said. “Today I got two outs and I’ve just got to make one more pitch somehow and get through that inning. For the most part, I feel like I’m really close, but the numbers haven’t shown it.”

At 41-88, the Orioles became the first team in the majors to be mathematically eliminated from postseason contention.

“Change happens frequently, especially when you’re in a situation where the team has been losing,” Elias said.

One day after playing past midnight in a rain-delayed game, the Orioles were given a chance to regroup before getting to work.

Hyde allowed the players to come in late and canceled batting practice, although a rain shower would have wiped it out anyway.

“We were going to stay off our feet today,” Hyde said. “It’s just one of those days when it’s late August, we’ve been at it a while and I’m trying to give the guys a breather.”

Rays: OF Avisail Garcia (right oblique strain) could be activated off the injured list Saturday, the first day he’s eligible to return. He played one rehab game with Triple-A Durham and was in the Rays clubhouse Friday. … LHP Anthony Banda, who’s been sidelined all season while recovering from Tommy John surgery, was activated from the 60-day IL and optioned to Durham. Cash hopes Banda and RHP José De León, who was been with Durham since mid-August, might help down the stretch.

Orioles: RHP Shawn Armstrong (forearm strain) was placed on the 10-day IL, retroactive to Aug. 22, and recalled RHP Dillon Tate from Triple-A Norfolk. … OF Dwight Smith Jr. has dealt with several injuries this season, and now he must bide his time in Norfolk. “Stay down there, get a few more ABs and come up here shortly,” Hyde said.

Rays: If Cash knew he was going to use as his starting pitcher Saturday, he wasn’t telling on Friday afternoon. Tampa Bay has not yet announced a starter for Sunday, either.